“So – my brother is a human being after all. This is going to be with you a long time, Jean-Luc. A long time. You have to learn to live with it. You have a simple choice now: live with it below the sea with Louis – or above the clouds with the Enterprise.” Robert Picard to Jean Luc Picard

I am a big fan of the various Star Trek television series for many reasons. Perhaps the biggest reason is how I see the series speak to real issues, including things like PTSD and Moral Injury. That is a wonderful thing about the genre of science fiction, good writers can make a fictionalized future relatable to those that read or watch their creation.  I think this especially valuable because the presentations are realistic, but at the same time because they are science fiction are less threatening.

In Star Trek the Next Generation and Star Trek Deep Space Nine there are a number of episodes that deal with the effects of PTSD, moral injury and combat stress injury.  They include some that deal with Captain Jean Luc Picard, Chief Miles O’Brien, Captain Benjamin Sisko and Ensign Nog. The ones dealing with Picard and Sisko deal with senior leaders, which makes them interesting to me.

The one about O’Brien deals with moral injury in a senior enlisted leader, and the episode about Ensign Nog, the effect of physical and emotional trauma on an idealistic junior officer. Today I am focusing on the senior leader aspect, looking at the experience of Picard after his abduction by the Borg and that of Chief O’Brien when he meets former Cardassian enemies that he fought in a desperate battle at an isolated outpost.

In the episode called The Wounded Chief O’Brien expressed what so many of us know about war, and voices what PTSD and Moral Injury does to us when he says to a Cardassian officer: “It’s not you I hate, Cardassian. I hate what I became, because of you.” It is a sentiment that I have encountered in other veterans, including some that I knew who served in World War II, Korea and Vietnam.

Senior leaders afflicted with PTSD are among those least likely to seek help for it, even when the effects on them are evident to most.  It is our culture, it is our personality, it is how we do life. Most of us are overachievers who for most of our lives been able to compartmentalize even the worst experiences in order to move ahead in our career and vocation as military leaders.

When we, that is senior leaders experience things that are troubling we seldom have the luxury of dwelling on them. We frequently have to keep things running, take care of our people and move along. So because we are not able to deal with these experiences and the emotions that they engender, we box them up, put them on a shelf and move on. This is important because the mission has to be fulfilled, even if there is a terrible price to be paid later.

Picard tells counselor Troi before going on leave: “Your help has been invaluable during my recovery, but… look, I’m, uh… I’m better! The injuries are healing.” Of course he is not better, he is simply in denial.

Unfortunately the traumatic experiences that we package and put into storage are often quite toxic. I like to use the term radioactive, it just sounds more sinister. They are corrosive, and like radioactive or other toxic waste quite often breach the containment vessels that we construct in our minds to store them.

Likewise since senior leaders have often spent years, or even decades dealing with trauma the effects are cumulative, it may not be a single incident of trauma, but multiple instances or trauma, and experiences that leave scars on our soul, things that cause us to wonder, and doubt the things that we believe in the most.

I have seen this happen all too often. I know, have known or am personally aware of numerous cases where senior leaders afflicted with PTSD, TBI or Moral Injury continue on, even get promoted to high command and then crash and burn. Sometimes it means the end of their upward mobility, for others the end of their career and for some a condition that eventually destroys them. Unfortunately, most don’t get help because of the stigma associated with it and the fear of what it will do to their career aspirations.

The truth of the matter is that these traumatic injuries remain with us. If we deny them, or try to contain them without dealing with them they are like highly toxic waste that eventually escapes containment. When they do breach containment they create devastation in our lives, careers and of the lives that we care about, our families, and those that we lead.

That help begins with us, we have to admit that we need help and seek it out. We also need colleagues, seniors and subordinates to be honest with us.  But even while getting help we have to decide to go on with life, that is a choice that we must make.

We have to know that even as we get help and even get some relief from the symptoms of PTSD, TBI, Combat Stress Injury or Moral Injury that the memories will remain. Feelings and images of trauma that we think we have gotten through are still lodged deep in our psyche, and sometimes it doesn’t take much for them to return, bigger than life. The memories can be triggered by sights or images, smells, music, or something someone says or does. They can be relived when we experience a new trauma that reminds of us of the past.  That is why trauma experienced even decades before can still be as vivid to soldiers as the day that they were first experienced. 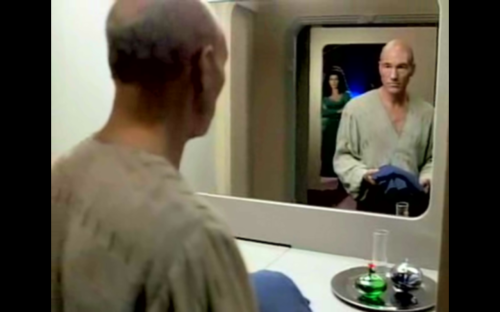 Counselor Deanna Troi told Picard after his encounter with the Borg: “Captain, you do need time. You cannot achieve complete recovery so quickly. And it’s perfectly normal, after what you’ve been through, to spend a great deal of time trying to find yourself again.”

I write in the hopes that all of us who have seen or experienced things in war are able to get the help that we need. But in the words of Robert Picard to his heroic yet traumatized brother; This is going to be with you a long time, Jean-Luc. A long time. You have to learn to live with it. You have a simple choice now: live with it below the sea with Louis – or above the clouds with the Enterprise.”

Yes, we do have to learn to live with it, but we can. Maybe not easily, but we can, and in doing so still do great things.