Thoughts and Concerns Regarding the Sochi Winter Olympics

However I am not watching tonight, and it is not for lack of interest in the sports, athletes and human interest stories. But something doesn’t seem right. I have a sense of foreboding about these games. The security situation troubles me, Chechen and other militant Islamists in the Caucasus have made credible threats. Based on their track record of successfully carrying out major bloody terror attacks throughout Russia, including Moscow, Volgagrad, and Beslan gives credence to the capabilities of these terrorists. I fear for the athletes, their families, the spectators and the citizens of Sochi. I do hope that the Russian Security Services are successful in preventing any attacks.

There are other things that trouble me. From the reports that I read it does not look like Sochi is really ready for prime time. The isolation of Sochi from the rest of Russia and the world is The reported troubles make it appear that the thin veneer of progress that Putin has tried to apply to a crumbling state is already wearing badly.

Likewise I do not trust Russian President Putin, it seems to me that he is returning Russia to an authoritarian state which persecutes its minorities, be they ethnic, religious or other supposedly less than desirable groups, specifically in the last case the Russian LGBT community.

The sad thing in the latter case is that supposedly American Christians like Scott Lively, and advocacy groups like the National Organization on Marriage, as well as many in the conservative Christian alternate media are encouraging and abetting those that would crush the rights of a minority group, in fact they praise Putin’s authoritarianism. I think that speaks volumes of what they think of civil, political and human liberties and is an indicator of what they would do in this country if they ever gained control of all the mechanisms of government. Thankfully I cannot see that happening, but stranger things have happened when virulent radicals promote fear and intolerance in the name of their religion, or ideology. 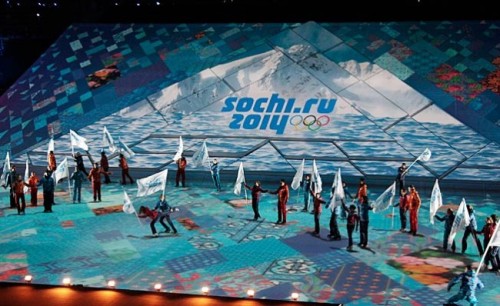 Now I am sure that I will watch many of the events shown of these games. I hope they will be successful and I will also be praying that no terrorist attacks harm anyone involved. That being concerned I am concerned for all in Sochi tonight.

Filed under News and current events, sports and life