The Oath of Office: What Kim Davis Doesn’t Get

Kim Davis, the Recalcitrant County Clerk of Rowan County, Kentucky remains in jail. She has supporters around the country, one of whom I had to ban from commenting on my site. I didn’t want to do it but after fair warning he gave me little choice. The man was taking advantage of my graciousness to hijack the comments section to preach at me and treat me and other commentators with a contempt that the Pharisee’s would have admired. When I informed him of this he played the aggrieved persecuted Christian victim of vile liberal oppression routine; but I digress…

Lost to many of Mrs. Davis’ supporters, including a number of presidential candidates, some who are sitting United States Senators, is the sacred importance of oath of office. All who serve in public office swear an oath to uphold the law taking office, even laws that we may not like. These oaths, be they local, state or federal all prescribe the conduct and duty of the oath taker. People who take these oaths often swear before God that they will faithfully uphold the laws of the land.

Kim Davis swore an oath, actually two of them and she is in violation of both of them. This is the oath that she took less than nine months ago when she took office as the Clerk of Rowan County Kentucky, it is prescribed by law in the State of Kentucky and applies to all who hold that office:

“I do solemnly swear (or affirm, as the case may be) that I will support the Constitution of the United States and the Constitution of this Commonwealth, and be faithful and true to the Commonwealth of Kentucky so long as I continue a citizen thereof, and that I will faithfully execute, to the best of my ability, the office of ——————— according to law; and I do further solemnly swear (or affirm) that since the adoption of the present Constitution, I, being a citizen of this State, have not fought a duel with deadly weapons within this State nor out of it, nor have I sent or accepted a challenge to fight a duel with deadly weapons, nor have I acted as second in carrying a challenge, nor aided or assisted any person thus offending, so help me God.”

The Kentucky legislature also stipulated in 1978:

Every clerk and deputy, in addition to the oath prescribed by Section 228 of the Constitution, shall, before entering on the duties of his office, take the following oath in presence of the Circuit Court: “I, ….., do swear that I will well and truly discharge the duties of the office of ………….. County Circuit Court clerk, according to the best of my skill and judgment, making the due entries and records of all orders, judgments, decrees, opinions and proceedings of the court, and carefully filing and preserving in my office all books and papers which come to my possession by virtue of my office; and that I will not knowingly or willingly commit any malfeasance of office, and will faithfully execute the duties of my office without favor, affection or partiality, so help me God.” The fact that the oath has been administered shall be entered on the record of the Circuit Court.

I am no stranger to taking an oath of office, and as a Navy Chaplain also signing a document binding me to support people of all religions and their religious liberty. The first oath I took was an oath of enlistment in the California Army National Guard. I took that oath 34 years ago on August 25th 1981. It stated:

I, ________ do solemnly that I will support and defend the Constitution of the United States and the State of California against all enemies, foreign and domestic; that I will bear true faith and allegiance to the same; and that I will obey the orders of the President of the United States (Ronald Reagan) and the Governor of California (Jerry Brown)  and the orders of the officers appointed over me, according to law and regulations. So help me God. 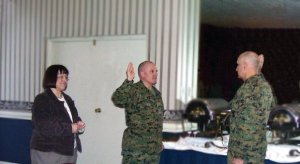 That was the beginning. On June 19th 1983 I took an oath as a Commissioned Officer in the United States Army. This is an oath that I renewed with every promotion, and every new appointment in the different components of the military in which I have served; the Army, the Texas and Virginia Army National Guard, and finally the United States Navy. That oath states:

I, _________, do solemnly swear that I will support and defend the Constitution of the United States against all enemies, foreign and domestic; that I will bear true faith and allegiance to the same; that I take this obligation freely, without any mental reservation or purpose of evasion; and that I will well and faithfully discharge the duties of the office on which I am about to enter. So help me God.

I and all other military chaplains also sign a letter when appointed in which each of us agree to serve in a pluralistic environment and to treat each person with dignity, respect, and compassion, irrespective of differences in religious beliefs. For Chaplains that is kind of like the Star Fleet’s Prime Directive.

I have been in the military officer for 34 years, an officer for 32 years and a chaplain for 23 of those years. In that time I have served different Christian denominations, two of which were very conservative, but even so recognized the need to care for all in our charge. I have done my best to care for my soldiers, sailors and marines for all of those years regardless of their beliefs, which span the spectrum of America.

If I cannot in good conscience do something, or if I cannot meet their particular religious need because they need a specific person of their faith group to conduct that rite, sacrament or other ritual, it is my duty, my obligation, to help them find the right person. Likewise, if they come to me seeking counsel or an administrative matter that the service dictates that they see me for, I cannot and will not turn them away. Sadly, I have had to take care of some service members’ non-religious administrative needs that the service required the chaplain to do, because their chaplains refused them based on their chaplain not approving of their faith, or lifestyle. In this case, these service members had me to go to and did not have to seek a court order, like the people in Rowan County Kentucky who were refused by Kim Davis.

This is what so many of Mrs. Davis’ supporters do not understand. Public office is not a private business nor is it a religious office or church. Likewise, all Federal and State appointed chaplains are officers of the state who happen to be religious ministry professionals whose training, and endorsement by their religious bodies is to serve in secular institutions and to protect the liberty of those they serve.

Likewise, judges, clerks, officers of the military, or police all take oaths to serve. Supreme Court Justice Antonin “Big Tony” Scalia said in regard to judges:

“[I]n my view the choice for the judge who believes the death penalty to be immoral is resignation, rather than simply ignoring duly enacted, constitutional laws and sabotaging death penalty cases. He has, after all, taken an oath to apply the laws and has been given no power to supplant them with rules of his own.”

President John F. Kennedy who faced severe criticism from Protestants because of his Catholic faith told the Houston Ministerial Association:

“I do not speak for my church on public matters; and the church does not speak for me. Whatever issue may come before me as President, if I should be elected, on birth control, divorce, censorship, gambling or any other subject, I will make my decision in accordance with these views — in accordance with what my conscience tells me to be in the national interest, and without regard to outside religious pressure or dictates. And no power or threat of punishment could cause me to decide otherwise.

But if the time should ever come — and I do not concede any conflict to be remotely possible — when my office would require me to either violate my conscience or violate the national interest, then I would resign the office; and I hope any conscientious public servant would do likewise.”

That is the true test of a public official in a pluralistic country. Sadly, like Mrs. Davis, some of her biggest name supporters do not understand that, and truly that is dangerous. Like all public officials, elected, appointed, or commissioned, Mrs. Davis took an oath of office to the state, not her church. If, less than nine months ago, she took those oaths knowing that she would break them then she lied. In doing so lied by swearing with her hand on the Bible and in the name of God.

Please do not preach to me about her relgious rights, if she is willing to lie with her hand on the Bible in the name of God, then she is not worthy of the office.