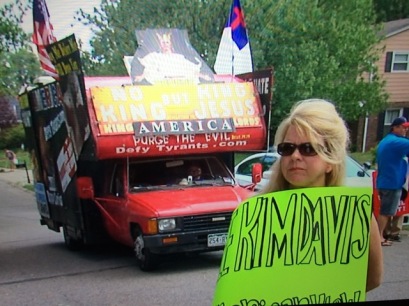 As I write this I can almost hear people echoing these words of Reverend Brown in the movie Inherit the Wind being uttered by some of my less than happy readers against me:  “Oh, Lord of the tempest and the thunder, strike down this sinner, as thou did thine enemies of old in the days of the Pharaohs! Let him know the terror of thy sword! Let his soul, for all eternity, writhe in anguish and damnation!”

But then, what’s new? Since I have stopped the hijacking of the site by such commentators that is all they can do. I tolerated their crap for too long, my generosity was treated with contempt, so screw them. I totally agree with the words of Frederick Douglass who wrote:

“Indeed, I can see no reason, but the most deceitful one, for calling the religion of this land Christianity. I look upon it as the climax of all misnomers, the boldest of all frauds, and the grossest of all libels…He who is the religious advocate of marriage robs whole millions of its sacred influence, and leaves them to the ravages of wholesale pollution. The warm defender of the sacredness of the family relation is the same that scatters whole families, — sundering husbands and wives, parents and children, sisters and brothers, — leaving the hut vacant and the heart desolate. “

According to some readers I represent and stand alongside a vocal minority that is intent on destroying America, minority that is despised and hated by many people in the name of their God. The group I speak of are homosexuals, and their supporters which include me, as well as those people who actually support the rule of law in this country. The 14th Amendment, which was the basis of the Supreme Court’s majority ruling in the case of Obergfell v. Hodges, the ruling which legalized Marriage Equality in all 50 States says:

Sadly, the opponents of Marriage Equality, or for that matter of any kind of civil rights for Gays use the same arguments against the rights of Gays that their Christian ancestors, in both the North and the South did to defend the institution of Southern Slavery. In His book Christianity’s Dangerous Idea, British Evangelical-Anglican theologian Alister McGrath observes how “the arguments used by the pro-slavery lobby represent a fascinating illustration and condemnation of how the Bible may be used to support a notion by reading the text within a rigid interpretive framework that forces predetermined conclusions to the text.” Then he asks a dangerous question, a very important question for modern Christians who might be tempted to support a position using the Bible to deny the rights of others for the same reasons today, “Might not the same mistakes be made all over again, this time over another issue?”

When I see the rabid politicians, preachers and pundits supporting the right of a public official to violate the civil liberties of others in the name of their interpretation of scripture, it is troubling. In this case they support Kim Davis, the Recalcitrant County Clerk of Rowan County Kentucky. Mrs. Davis violated the oaths of office that she took, defied the Governor of Kentucky, as well the rulings of multiple courts including the Supreme Court of the United States and was jailed on contempt of court charges. 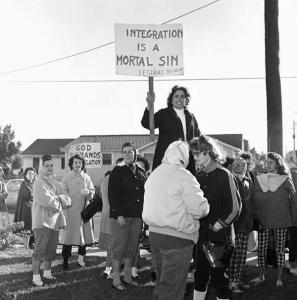 Sadly I see disturbing parallels in their arguments to the arguments of Christians in the North and the South before the Civil War regarding slavery, and the disenfranchisement of newly emancipated African Americans following the Civil War, during Reconstruction and during the Jim Crow era.

The supporters of Mrs. Davis view the world through the lens of Manichean dualism. Those who agree with them, agree with God and those who do not, are evil, and deserving of no liberty, nor life. Before the Civil War, Southern theologian James Henley Thornwell presented the conflict between northern evangelical abolitionists and southern evangelical defenders of slavery in Manichean terms. He and many others believed that by arguing for abolition that Christian abolitionists attacked religion itself. It was not just an attack on their belief in validity of the institution of slavery, it was an attack on their faith. Thornwell wrote:

“The “parties in the conflict are not merely abolitionists and slaveholders,…They are atheists, socialists, communists, red republicans, Jacobins, on one side, and friends of order and regulated freedom on the other. In one word, the world is the battle ground – Christianity and Atheism as the combatants; and the progress of humanity at stake.”

Thornwell was joined by Robert Lewis Dabney, a southern Presbyterian pastor who later served as Chief of Staff to Stonewall Jackson in the Valley Campaign and at Seven Pines and who remained a strident defender of slavery, and opponent of civil rights for blacks long after the war was over. Dabney’s words remind me very much of the words of the militants speaking up for Mrs. Davis and condemning all who support the rights of Gays. Dabney wrote:

“we must go before the nation with the Bible as the text and ‘Thus saith the Lord’ as the answer….we know that on the Bible argument the abolition party will be driven to reveal their true infidel tendencies. The Bible being bound to stand on our side, they have to come out and array themselves against the Bible. And then the whole body of sincere believers at the North will have to array themselves, though unwillingly, on our side. They will prefer the Bible to abolitionism.”

But I think one of the most reveling are the words spoken by the Reverend William Leacock of Christ Church, New Orleans declared in his Thanksgiving sermon of 1860:

“Our enemies…have “defamed” our characters, “lacerated” our feelings, “invaded “our rights, “stolen” our property, and let “murderers…loose upon us, stimulated by weak or designing or infidel preachers. With “the deepest and blackest malice,” they have “proscribed” us “as unworthy members… of the society of men and accursed before God.” Unless we sink to “craven” beginning that they “not disturb us,…nothing is now left us but secession.”

The very personal nature of Leacock’s complaint in his sermon about abolitionists following the election of Abraham Lincoln in 1860 is startling when you compare it to the words of so many anti-LBGT politicians, pundits and preachers, some of who even urge civil war and secession if they do not get their way. Mike Huckabee says that Davis being jailed on contempt of court charges “removes all doubt of the criminalization of Christianity in our country.”

The invective against Judge Bunning, a Republican who was appointed to the bench by George W. Bush, and all who support the law is reaching the level where frustrated supporters will resort to violence. It has happened before. In fact, one of the leaders, of the protest outside Judge Bunning’s home yesterday on charges of “violating the law of God” was the Reverend Flip Benham. Benham is no stranger to precipitating violence against those he deems violators of God’s law by stoking the fear and anger of his followers. In 2009 one of those followers, murdered a doctor who performed late term abortions in the man’s church. Likewise, Benham has stalked others and he has defended the murderer of others. If he can motivate people to kill abortion providers, why not gays and their supporters? Thus I have legitimate concerns for the safety of Judge Bunning and anyone who gets in the way of Benham and his followers.

Mrs. Davis was released jail yesterday, and ordered her not to interfere with the issuing of gay marriage licenses. Judge Bunning released her because he was satisfied  that her office is “fulfilling its obligation to issue marriage licenses to all legally eligible couples.” Her supporters will claim this as a victory, but it will not change the law, and I imagine that if she interferes with her subordinates, Judge Bunning says that she will end up back in jail. She and her lawyers and Mike Huckabee exited the jail to the cheers of their supporters. Their words and actions showed a arrogance and defiance of law that only American Christians of our era, as well as the ante-Bellum South, and the Reconstruction and Jim Crow eras seem capable. We will see what happens, I am not optimistic so long there is a dollar and political point to be gained.

With this “victory” the lawyers who led her down the primrose path to jail will move on and leave Mrs. Davis behind if she complies with Judge Bunning’s order. Their “success” will encourage others to do the same. These politicians, preachers and pundits who led this charge want a conflict, and they need a conflict to legitimize themselves. They also need it to make lots of money donated by their followers without accomplishing anything. They hate Gays, and liberals and make their money playing the victim, when it is they who seek to deny the rights of others. One of their most influential writers, an adviser to Rand and Ron Paul expressly said so:

“The long-term goal of Christians in politics should be to gain exclusive control over the franchise. Those who refuse to submit publicly to the eternal sanctions of God by submitting to His Church’s public marks of the covenant–baptism and holy communion–must be denied citizenship, just as they were in ancient Israel.”

North’s words apply to everyone who stands against his interpretation of Christian Dominionism.

But with Bible in hand they will go forward, and I am reminded of the words of Atticus Finch in To Kill a Mockingbird:

“Sometimes the Bible in the hand of one man is worse than a whiskey bottle in the hand of (another)… There are just some kind of men who – who’re so busy worrying about the next world they’ve never learned to live in this one, and you can look down the street and see the results.”

These people are a scary bunch. Their right to discriminate against others based on their religious beliefs matters more than the Constitution, and matters more than bearing a true witness of God’s love to the world.