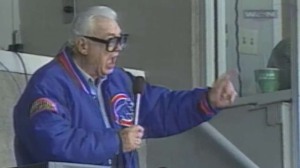 The late, great, Chicago Cubs broadcaster, Harry Caray, made a darkly humorous comment that once again seems to have come true. Caray said, “What does a mama bear on the pill have in common with the World Series? No cubs.”

The Chicago Cubs under the direction of former Tampa Bay Rays skipper Joe Maddon had a great season. They reached the playoffs as a Wild Card team, and knocked out the St. Louis Cardinals in the National League Division series.

I kind of hoped that they would have won the World Series this year, even though I believe that should the Cubs ever win the World Series that Jesus will return. I am a big fan of Cubs starter Jake Arietta who I know from his time in the Orioles organization and time in Norfolk, and I do have a soft spot for the Cubs. In fact about six years ago I wrote, “it all comes down to baseball, just as everything else in life. My belief is that when the Chicago Cubs win the World’s Series that we’d better start looking to the East, and pronto.” Since the “amazin’ Mets” beat the Cubs in the National League Championship Series I will have to assume that the perousia (the Greek word for the second coming) will again be delayed, at least until next year.

The Mets swept the Cubbies in large part due to the hitting of Daniel Murphy who hit his sixth consecutive home run, breaking a playoff record.  It looks like the Mets will now play the winner of the Kansas City Royals and Toronto Blue Jays American League Championship Series, which the Royals now lead three games to two with the series going back to Kansas City on Friday.

So, until we know something else, here is to the Mets, who made my season by defeating the evil Los Angeles Dodgers in their National League Division Series last week. As a diehard San Francisco Giants fan I have to salute the Mets, who have been amazing this year. As for the Cubbies, there is always next year. They have nothing to be ashamed of this season; they are a young team, they made the playoffs and beat the only team to win 100 games. It is not the World Series, but it is not bad.