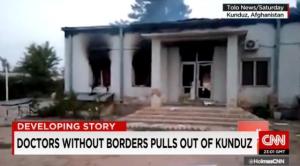 I have been troubled by the disaster at the Doctor’s Without Borders in Kunduz Afghanistan, a disaster that appears to be linked to the actions of U.S. and or NATO, Coalition, and Afghan forces as well as the Taliban who had taken control of that city a few days before the attack.

There are so many things about this incident that trouble me, but truthfully I, like almost everyone, know very little about it, other than the fact that too many innocent people died as a result of what appears to be a prolonged air strike against what should have been a known hospital. Now, truthfully, none of us knows enough about the incident to declare it a justified act, a tragic mistake, or a war crime, and there are people who without full knowledge of the facts are arguing for each of these positions. However, that has not stopped the speculation about the circumstances concerning the incident. Today the American command released a statement saying that Afghan forces requested the air strikes.

The fact is that the circumstances are unclear, and in the fog of war we may never know the truth about what happened. I do not pretend to think that the Taliban are entirely without blame, nor is the incredibly corrupt Afghan government and military; and most importantly are American, NATO and other non-Afghan coalition forces.

I do caution anyone who attempts to place the blame for what happened on any one group in this conflict, and I think that it was irresponsible for people in the United Nations to declare that this could be a war crime without knowing all the facts.

That being said I believe, as a career military officer, that we as Americans need to hold ourselves, and our military to a higher standard than our enemies and even our coalition partners. Sadly, we have not always done this and sometimes we have not only committed war crimes, but also we often hold ourselves above international sanction and law when our forces are suspected of committing war crimes. Even more importantly we ignore the words of a man who acting as an agent of the United States, and the United Nations set the standard for prosecuting war criminals. I am talking about Supreme Court Associate Justice Robert Jackson, who organized the trials of the major Nazi War Criminals at Nuremburg.

When the trials were being organized Justice Jackson set down a rule of conduct for his American, and allied colleagues from Britain, the Soviet Union and France. Sadly, we Americans have failed to heed his words on many occasions. Jackson noted:

“If certain acts of violation of treaties are crimes, they are crimes whether the United States does them or whether Germany does them, and we are not prepared to lay down a rule of criminal conduct against others which we would not be willing to have invoked against us.” Justice Robert Jackson International Conference on Military Trials, London, 1945, Dept. of State Pub.No. 3080 (1949), p.330.

Now personally I hope that this is a tragic accident brought about by a confused tactical situation that was worsened by the fog of war. Truthful that does not lessen the pain and tragedy of what happened in Kunduz, but it is far better than the alternative; that American forces ignored warnings and intelligence that this was a hospital and kept attacking even after being told that it was a hospital. If the latter is the case the charge that this could be a war crime cannot be ignored.

As a veteran of Iraq and a career officer who knows the terrible horrors of war first hand, as well as being a historian and theologian I am especially sensitive to the nuances of such events and know that many times that what happens is difficult to fully understand or comprehend. I can only hope that Secretary of Defense Carter and President Obama will ensure that an investigation, coordinated with the U.N. and our coalition partners fully explores what happened, and if American forces acted improperly, or even in a criminal manner take the moral high ground and assume responsibility.

We cannot ignore the precedent that we ourselves set when we tried the surviving leaders of the Nazi regime at Nuremburg. War crimes are war crimes no matter what people commit them, and we must hold ourselves to this higher standard. But then we must also realize as Hannah Arendt noted “The sad truth is that most evil is done by people who never make up their minds to be good or evil.”

Likewise there are people, like a younger me, who agree with Commodore Stephen Decatur who declare “my country right or wrong” and then ignore any possible evils committed by the United States. I love and serve my country, but if we are complicit in war crimes then what have we become? Are we willing to throw away our ideals, our ethics, our humanity to ensure our survival?

Personally, even if the worst outcome is true, I cannot imagine that those involved meant to commit a war crime, but that being said there is a rationalization that even good people make during war, that their actions, or the actions of their nation are excused by necessity. I am reminded of the words of Spencer Tracy in the movie Judgment at Nuremburg when he said:

“There are those in our own country too who today speak of the “protection of country” – of ‘survival’. A decision must be made in the life of every nation at the very moment when the grasp of the enemy is at its throat. Then, it seems that the only way to survive is to use the means of the enemy, to rest survival upon what is expedient – to look the other way. Well, the answer to that is ‘survival as what’? A country isn’t a rock. It’s not an extension of one’s self. It’s what it stands for. It’s what it stands for when standing for something is the most difficult! Before the people of the world, let it now be noted that here, in our decision, this is what we stand for: justice, truth, and the value of a single human being.”

At Kunduz over twenty medical personnel at the Doctors Without Borders died, another three dozen were wounded when American, or other coalition aircraft responded to the call of Afghan ground forces for air support against the Taliban. Regardless of if the Taliban were taking advantage of the hospital to engage the Afghan troops, the location of the hospital was known to coalition forces, it had been there and in operation for four years.

Please do not get me wrong, I want my country to always be in the right. For over 30 years I have sworn an oath to defend the Constitution of the United States and followed what I believe is a call to uphold the best that our country has to offer. I do not support the Taliban or any other group that would seek to impose a theocracy on their people, but at the same time how can I countenance the support of a discredited, unethical and corrupt regime that has squandered the lives and trust of its own people while at the same time taking advantage of American and NATO forces, our military and intelligence support as well our massive economic support without which they could not remain in power?

When I see what the U.S. backed governments in Afghanistan, not to mention Iraq have done to their people with our support I feel much like T.E. Lawrence who wrote of the British administration in 1920 Iraq:

Like about everyone I do not pretend to know everything that happened in this incident. But that being said; of we as Americans cannot uphold and subject ourselves to the same standards that we have imposed on others, then what does that say about us? I wonder what our response will be and I am troubled, because I think that we will not hold ourselves to the standards that we ourselves claim to uphold. I say this because we have not done so since Nuremberg.

If we fail in this task, the task to embody the truth of what is in our Declaration of Independence and Constitution, to embody the spirit of the city set upon a hill that inspired so many before we were ever a military power to come here, to believe that the principles that we stood for were better than their own countries;  it will not matter how many Taliban we kill for we will have lost thawed and in the process our collective soul. As Lawrence wrote in 1920 “We are to-day not far from a disaster.”

Praying for Peace and Justice,