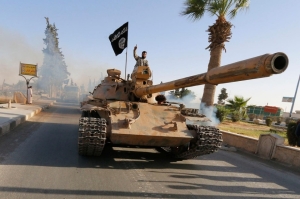 We are now waking up to the fourth day in the next phase of a war that began too long ago, a war that too many people have been victimized by, which only is getting worse and more widespread.

Winston Churchill wrote, “If Hitler invaded hell I would make at least a favorable reference to the devil in the House of Commons.” That may seem an odd statement, Churchill made it in reference to the alliance with the Soviet Union to defeat Hitler in World War Two, but it bears a particular relevance to the situation that we find ourselves in with ISIL, or as they are also known, DAESH.

This is a follow up to my posts of the last few days regarding the attacks of Islamic State supporters in Paris and it will not be the last. French President Hollande has correctly noted that the attack was an act of war, and he promised that the French campaign against DAESH would be ruthless. Hollande and other leaders, including President Obama are now beginning to plan a coordinated strategy to defeat DAESH. That being said, any real strategy to defeat DAESH has to include more than a few partners, it must be truly a grand alliance.

I am a career military officer, an Iraq veteran and an anti-war liberal, but I am also a realist in terms of the world. I have no illusions about the world. I do not believe that the United States always acts with honor and I know in my heart of hearts that much of the chaos that we are seeing in the world, particularly the Middle East comes from years of misbegotten American intrigue and intervention. Of course the Americans were not the only ones involved in creating this mess, we can thank the French and the British for the Sykes-Picot agreement. That agreement and the subsequent post-war agreements artificially divided the Middle East based on British and French colonial interests and disregarded the traditional and historic interests of the people in the region. Those agreements also handed the Arabian Peninsula over to the House of Saud, rather than the more moderate Arabs that fought alongside the British against the Ottoman Empire. We can also thank the Russians for their contributions to the instability of the region, as well as the Israelis who in defending their interests have often made things worse. Finally we cannot forget the role played by many corrupt and despotic Arab leaders who have oppressed their people, and exploited their countries riches for their own gain. Finally, back to the Americans it was the ill-advised and criminal invasion of Iraq by the Bush administration that opened Pandora’s Box and unleashed what we now know as the Islamic State. Sadly, almost all the countries currently involved have had a hand in creating the monster that we know as DAESH and the Islamic State, and all should bear part of the responsibility for defeating it.

That being said, whether any of us like it or not we are at war, a war that has been going on in earnest since 2003. This is not a new war, it is simply DAESH’s continuation of the war that was declared by Al Qaeda, and that Al Qaeda Iraq fought against American, allied, and Iraqi forces from 2003 through 2011.

The genie of war is out of its bottle and it will not return on its own accord, and it will create more chaos, death and destruction, both in the Middle East, but also other parts of the world. The threats of DAESH need to be taken seriously and countered.

We have to understand that this war is not a movie, it is not a video game, and it has the potential to change all of our lives, and not for the better.

Likewise, the fight against DAESH will not be solved or won by military action alone. The falsehoods of the warn porn addicts who believe deploying ground troops without the support of the people in the region, nor dropping more bombs will win the war. President Obama noted correctly, in response to suggestions that large numbers of ground troops be deployed, “that that would be a mistake, because we would see a repetition of what we’ve seen before, which is if you do not have local populations that are committed to inclusive governance and who are pushing back against ideological extremes, that they resurface….” He is right for saying this because those who propose sending in large numbers of ground troops are not committed enough to the hard thing and fully mobilize the nation for war. Instead they would as they always do, put the burden of the war on an already worn out professional volunteer military force without being willing to work with other powers, even rivals that have an interest in defeating DAESH.

The full spectrum of national and international power must be deployed to fight DAESH. This includes the U.S., NATO, Russia, China, Japan, the Arab world, and even Iran. Yes, some of these nations are competitors and rivals, but all have a vested interest in defeating DAESH and all have capabilities that would be helpful in the fight. In the Second World War the President Franklin Roosevelt United States and Britain’s Prime Minister Winston Churchill allied themselves with the Josef Stalin and the Soviet Union in what was then known as the Grand Alliance to defeat Hitler. The Grand Alliance was a real world demonstration of the art of realpolitik. Realpolitik demands compromise and finding common ground with nations that we may not like. Those that practice realpolitik also understand that almost all alliances are temporary. This may be unsavory to idealists, but it is reality, and it is the only thing that will defeat DAESH. It is high time the world leaders to get real in combatting DAESH.

Military force seems always to be the first thing that people think of, and while important, it is not the only kind of power that must be used. If we are going to use military force, we need to work with our allies and commit ourselves to a massive use, on the order of World War II, and coupled with a massive new Marshal Plan for the Middle East. We must use diplomatic and economic power, intelligence and information, coordinate national and international law enforcement efforts, and seek to redress many of the wrongs committed against the people in the region.

Since I am a realist, I understand that whether I want it or not, that this war will most likely remain part of our lives, maybe for a generation or more. Honestly, if we do not make a full effort, I expect that a hundred years from now that young men and women will still be fighting this war. Most will have no idea how it began, even as their governments, corporations, and others make a steady profit off of the war.

I will continue this tomorrow with some thoughts on the civil liberties that we will undoubtedly lose as this war progresses. I think that I will write about the dangers of how xenophobic racists, and others who demonize all Moslems, and who want to punish all Moslems for the actions of DAESH, especially those who are the victims of DAESH who have fled to Europe and other areas to escape them. That is already beginning in this country.

But that is all for today,

One response to “A New Grand Alliance to Defeat DAESH”