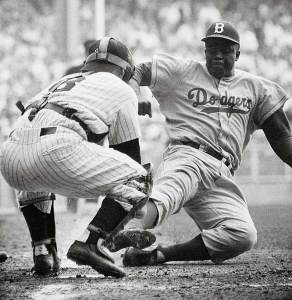 Today I am remembering the immortal Jackie Robinson, one of the most remarkable Americans who ever lived, not to mention that played baseball. Former American League President Gene Budig noted: “He led America by example. He reminded our people of what was right and he reminded them of what was wrong. I think it can be safely said today that Jackie Robinson made the United States a better nation.”

April 15th 2016 was the 69th anniversary of Jackie Robinson’s first game in the Major Leagues with the Brooklyn Dodgers.  When he stepped onto the field, Jim Crow was very alive and well when Jackie stepped onto the field that day and no matter how much we want to distance ourselves from those days there are still some in this country who want to go back to that kind of society.

Jackie had experienced the full force of Jim Crow while serving as an Army Officer in the Second World War. While at Fort Hood Texas serving with the 761st Armored Battalion Robinson boarded an army bus and was ordered to the back of the bus by the driver. Robinson refused to comply as the army busses were not segregated, but the drive reported him to the Military Police. He was arrested and charged with a number of crimes and was tried by a Court Martial which acquitted him, however, it did prevent him from going to war with the 761st, which was the first African-American ground-combat unit to see action, and played a part in his determination to succeed.

Robinson’s first game with the Dodgers came a full year before President Truman integrated the military, a move which infuriated many in the South.  Likewise it occurred a full seven years before the Supreme Court ruled school segregation unconstitutional in the Brown vs Board of Education decision.  It came a full 17 years before Congress passed the Voters Rights Act in 1964.

When Jackie Robinson stepped onto the field it was a watershed moment in Civil Rights for African Americans and paved the way for a change in American society that has continued since his Major League debut. Blacks had struggled for years against Jim Crow laws, discrimination in voting rights and even simple human decencies like where they could use a rest room, sit on a bus or what hotel they could stay in.

In baseball many white fans were upset that blacks were allowed to see Robinson in stadiums that they would not have been allowed in before.  Players from other teams heckled Robinson, he received hate mail, people sent made death threats, he was spiked and spit on.  But Jackie Robinson kept his pledge to Dodgers owner Branch Rickey not to lash out at his tormentors, as Rickey told him that he needed a man “with enough guts not to strike back.”

Jackie Robinson played the game with passion and even anger.  He took the advice of Hank Greenberg who as a Jew suffered continual racial epithets throughout his career “the best ways to combat slurs from the opposing dugout is to beat them on the field.” He would be honored as Rookie of the Year in 1947. He was a MVP and played in six World Series and six All Star Games.  He had a career .311 batting average, .409 on base percentage and .474 Slugging percentage. He was elected to Baseball’s Hall of Fame in 1962.

In 1964 Robinson again experienced the hatred of racists when he was a delegate for Nelson Rockefeller at the 1964 GOP Convention. It was yet another reminder of the racism that Robinson had fought all of his live to end. He wrote in his autobiography of the experience:

“I wasn’t altogether caught of guard by the victory of the reactionary forces in the Republican party, but I was appalled by the tactics they used to stifle their liberal opposition.  I was a special delegate to the convention through an arrangement made by the Rockefeller office. That convention was one of the most unforgettable and frightening experiences of my life. The hatred I saw was unique to me because it was hatred directed against a white man.  It embodied a revulsion for all he stood for, including his enlightened attitude toward black people.

A new breed of Republicans had taken over the GOP.  As I watched this steamroller operation in San Francisco, I had a better understanding of how it must have felt to be a Jew in Hitler’s Germany.

The same high-handed methods had been there.

The same belief in the superiority of one religious or racial group over another was here.  Liberals who fought so hard and so vainly were afraid not only of what would happen to the GOP but of what would happen to America.  The Goldwaterites were afraid – afraid not to hew strictly to the line they had been spoon-fed, afraid to listen to logic and reason if it was not in their script.

I will never forget the fantastic scene of Governor Rockefeller’s ordeal as he endured what must have been three minutes of hysterical abuse and booing which interrupted his fighting statement which the convention managers had managed to delay until the wee hours of the morning.  Since the telecast was coming from the West Coast, that meant that many people in other sections of the country, because of the time differential, would be in their beds.  I don’t think he has ever stood taller than that night when he refused to be silenced until he had had his say.

It was a terrible hour for the relatively few black delegates who were present.  Distinguished in their communities, identified with the cause of Republicanism, an extremely unpopular cause among blacks, they had been served notice that the party they had fought for considered them just another bunch of “niggers”.  They had no real standing in the convention, no clout.  They were unimportant and ignored.  One bigot from one of the Deep South states actually threw acid on a black delegate’s suit jacket and burned it.  Another one, from the Alabama delegation where I was standing at the time of the Rockefeller speech, turned on me menacingly while I was shouting “C’mon Rocky” as the governor stood his ground.  He started up in his seat as if to come after me.  His wife grabbed his arm and pulled him back.

I was ready for him.  I wanted him badly, but luckily for him he obeyed his wife…” (From Jackie Robinson “I Never Had it Made” Chapter XV On Being Black Among the Republicans)

Today Jackie Robinson’s life, and his feat of breaking the color barrier in baseball is history, but it should not be forgotten.  He was a pioneer who made it possible for others to move forward.  He would be followed by players like Roy Campinella, Satchel Paige, Don Larson, Larry Dobie and   Willie Mays.  His breakthrough had an effect not just on baseball but on society.

Jackie Robinson would have an effect on my life.  In 1975 the Stockton Unified School District voted to desegregate.  I was in the 9th grade and preparing for high school.  As the school board wrestled with the decision anger boiled throughout the town, especially in the more affluent areas.  Vicious letters were sent to the school board and to the Stockton Record by parents as well as other opponents of the move.  Threats of violence and predictions failure were commonplace.  In the summer of 1975 those who went out for the football team, both the sophomore and varsity squads began to practice.  Black, White, Mexican and Asian, we bonded as a team, the Edison Vikings.  By the time the first buses pulled up to the bus stops throughout town on the first day of school, the sense of foreboding ended.  Students of all races discovered common interests and goals.  New friends became guests in each others homes, and all of us became “Soul Vikes.”

30 years later the Class of 1978, the first class to be desegregated from start to finish graduated from Edison held a reunion.  Our class always had a special feel about it.  Looking back we too were pioneers, like Jackie Robinson we were far ahead of our time.  When I look at my friends on Facebook from Edison I see the same faces that I played ball, rode the bus and went to class with.   Things have changed.  Even 30 years ago none of us imagined an African American President, we believed in each other and we saw potential, but I don’t think that anyone believed that we would see this in our day.

I think that Jackie Robinson prepared the way for other pioneers of Civil Rights including Dr. Martin Luther King.  Today, some 69 years later Jackie Robinson looms large in American History; not only in baseball, but for the impact of his life and actions on America.

His number “42” is now retired from baseball. The last player to wear it was Mariano Rivera of the Yankees. Rivera had been granted an exemption to wear it until he retired. At least the last Major League ball player to honor the number was a class act who will certainly be in the Hall of Fame.

Robinson said something that still resonates with me: “Life is not a spectator sport. If you’re going to spend your whole life in the grandstand just watching what goes on, in my opinion you’re wasting your life.” It is something that I take into account every day of my life.

May we not forget and always forge ahead in the constant struggle for civil rights and equality, even as many in our nation sink back into the old ways of apathy, and the toleration of injustice and inequity, even seeking to reverse the hard gotten gains that we all have been blessed to see.

So here’s to you Jackie Robinson, thank you and all the other pioneers who have and who continue to fight for the rights of all people.