Slavery and National Expansion: the Compromise of 1850 or “The Privilege of Belonging to the Superior Race…” Part 1 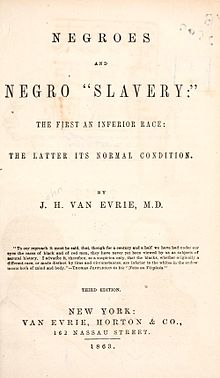 Today a continuation of my work dealing with American Slavery in the ante-bellum period. These next articles deal with the subject of what happens when laws are made that further restrict the liberty of already despised, or enslaved people. In this case the subject is the Compromise of 1850 and its associated laws such as the Fugitive Slave Act of 1850.

This is an uncomfortable period of history for Americans with either a sense of conscience, or those who believe the racist myths surrounding the “Noble South” and “The Lost Cause.”  I hope that you find them interesting, especially in light of current events in the United States.

The ante-bellum South was an agrarian society that depended on the free labor provided by slaves. In a socio-political sense the South was an oligarchy that offered no freedom to slaves, openly discriminated against free blacks and provided little hope of social or economic advancement for poor and middle class whites.  However, despite this, even poor whites supported it.  Many Southern Yeoman farmers were willing to tolerate their second class status because they: “feared the fall from independent producer to dependent proletarian, a status he equated with enslavement” [1] more than remaining subservient to planters and plantation owners. In fact, for them slavery was the one institution that kept them above the despised black.

In 1861, Dr. J.H. Van Evrie, promoted the scientific racist of ichthyologist Louis Agassiz in a pamphlet entitled “Negroes and Negro Slavery;” The First an Inferior Race – The Latter, Its Normal Condition” expressed how most Southerners felt about African Americans be they slave or free, and Jefferson Davis hoped that Van Evrie’s arguments would persuade people to adopt the view that racial equality was a fallacy which could not be tolerated, Van Evrie wrote:

“He is not a black white man, or merely a man with a black skin, but a DIFFERENT AND INFERIOR SPECIES OF MAN; – that this difference is radical and total… that so called slavery is neither a “wrong” nor an “evil, but a natural relation based upon the “higher law,” in harmony with the order, progress, and general well-being of the superior one, and absolutely in keeping with the existence of the inferior race.”  [2]

While all Northern states had abolished slavery, or were in the process of gradual abolition in the after independence and the Civil War and had moved to an economic concept of free labor, the South had tied its economy and society to the institution of slavery. The contrast was well said by the members of an Alabama agricultural society, which noted in 1846:

“Our condition is quite different from that of the non-slaveholding section of the United States. With them their only property consists of lands, cattle and planting implements. Their laborers are merely hirelings, while with us our laborers are our property.” [3]

Van Evrie was not the only person making such distinction between the races. Dr. Samuel Cartwright wove the pseudo-science of the day into the narrative of the Bible, noting:

“I have thus hastily and imperfectly noticed some of the more striking anatomical and physiological peculiarities of the Negro race. The question may be asked, Does he belong to the same race as the white man? Is he a son of Adam? Does his particular physical confirmation stand in opposition to the Bible, or does it prove its truth?… Anatomy and physiology have been interrogated, and the response is, that the Ethiopian, or Canaanite, is unfitted for the duties of a free man….” [4]

“The Declaration of Independence, which was drawn up at a time when negroes were scarcely regarded as human beings, “That all men are by nature free and equal,” was only intended to apply to white men…” [5]

Northerners on the other hand, even in states where the last vestiges of slavery held on, nearly universally ascribed to the understanding that there was a dignity to labor and that free labor was essential if people were to have a better life. It undergirded their understanding of human dignity and that “labor was the source of all value.” [6]

That understanding of the intrinsic value of free labor continued to gain ground in the North in the decades preceding the Civil War and found much of its support in the Calvinist theology that predominated in most Protestant Northern denominations. Labor was intrinsic to one’s calling as a Christian and a human being, slave labor, at least in the eyes of many Northerners undercut that idea. Success in one’s calling glorified God and provided earthly evidence that a person was among the elect. For many Northern Christians, “the pursuit of wealth thus became a way of serving God on earth, and labor, which had been imposed on fallen man as a curse, was transmuted into a religious value, a Christian calling.” [7]  Such ideas found their way into Republican political thought even when not directly related to religion.  William Evarts said in 1856 “Labor gentlemen, we of the free States acknowledge to be the source of all of our wealth, of all our progress, of all our dignity and value.” [8] Abraham Lincoln noted that “the free labor system…opens the way for all, and energy and progress, and improvement in condition for all,” [9] and Lincoln also noted something inherent in the economic theory of Adam Smith that Labor is prior to, and independent of capital…in fact, capital is the fruit of labor.” [10]

“In all social systems there must be a class to do the menial duties, to perform the drudgery of life…. It constitutes the very mudsill of society….Such a class you must have, or you would not have that other that leads to progress, civilization and refinement….Your whole hireling class of manual laborers and ‘operatives,’ as you call them, are essentially slaves. The difference between us is, that our slaves are hired for life and well compensated…yours are hired by the day, not cared for, and scantily compensated.” [11]

Even so, the fact that the slave barons “were forced at every election to solicit the votes of “ignorant, slovenly, white trash in the country” with “frequent treats that disgrace our elections,” [12] rankled and humiliated many members of the Southern aristocracy. It was a marriage of two disparate parties linked by their membership in a superior race, something that only the continued existence of slavery ensured.

Lincoln extolled the virtues of free-labor, noting his own experiences after his election: “I am not ashamed to confess that twenty five years ago I was a hired laborer, mauling rails, at work on a flat boat – just what might happen to any poor man’s son.”  [13] Other Northerners lauded free-labor as the basis of upward mobility, and the New York Times noted that “Our paupers to-day, thanks to free labor, are our yeomen and merchants of tomorrow.” [14]

But whites in the South held labor in contempt due to the system of slavery, and the divergent views of each side were noted by Thomas Ewing who noted that labor “is held honorable by all on one side of the line because it is the vocation of freedmen – degrading in the eyes of some on the other side because it is the task of slaves.” [15] Of course with labor being the task of African slaves for southerners, the issue was entwined with race, and “Even if slavery was wrong, its wrongs were cancelled out for nonslaveholders by the more monstrous specter of racial equity.”  [16]

Georgia Governor Joseph E. Brown emphasized the threat to whites in that blacks would be their social equals and competitors. The racial component assured poor southern whites that they were superior to blacks and an Alabama lawyer wrote “The privilege of belonging to the superior race and being free was a bond that tied all Southern whites together… and it seemed from a Southern stand-point, to have for its purpose the leveling of all distinctions between the white man and the slave hard by.” [17] But poor white workers who remained in the South “repeatedly complained about having to compete with slaves as well as poorly paid free blacks” [18] leading many to seek a new livelihood in either Free States or the new territories.

For Southern politicians and slaveholders, the expansion of slavery was essential to its continued maintenance in the states where it was already legal. “Because of the need to maintain a balance in the Senate, check unruly slaves, and cultivate fertile soils, many planters and small plantation owners- particularly those living in the southern districts of the cotton states- asserted that their survival depended on new territory.” [19] In those decades “a huge involuntary migration took place. Between 800,000 and 1 million slaves were moved westward….” [20]

The need for slaves caused prices to soar, largely due to the ban on the import of slaves from Africa. This made the interregional trade much more important and linked the upper and lower south as well as the new slave-holding territories into “a regionwide slave market that tied together all of the various slaveowning interests into a common economic concern.” [21] In some older states like Virginia where fewer slaves were required, the exportation of slaves became a major industry:

“male slaves were marched in coffles of forty or fifty, handcuffed to each other in pairs, with a long chain through the handcuffs passing down the column to keep it together, closely guarded by mounted slave traders followed by an equal number of female slaves and their children. Most of them were taken to Wheeling, Virginia, the “busiest slave port” in the United States, and from there they were transported by steamboat to New Orleans, Natchez, and Memphis.” [22]

[2] Van Evrie, J.H. “Negroes and Negro Slavery;” The First an Inferior Race – The Latter, Its Normal Condition 1861 in The Confederate and Neo-Confederate Reader: The Great Truth about the Lost Cause, Loewen, James W. And Sebesta, Edward H. Editors, University Press of Mississippi, Jackson, 2010 p.75

[4] Cartwright, Samuel A. Diseases and Peculiarities of the negro Race, 1851 in Loewen, James W and Sebesta, Edward H. The Confederate and Neo-Confederate reader: The Great Truth about the Lost Cause University of Mississippi Press, Jackson 2010 p.66

3 responses to “Slavery and National Expansion: the Compromise of 1850 or “The Privilege of Belonging to the Superior Race…” Part 1”