A Bridge Too Far: History, Dissent, and North Korea 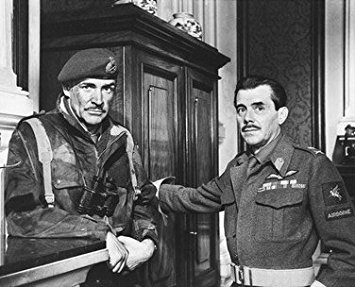 Major General Urquhart: I took 10,000 of our finest troops to Arnhem; I’ve come back with less than 2,000. I don’t feel much like sleeping.

Lt. General Frederick “Boy” Browning: According to himself, technically, Market Garden was 90% successful.

Major General Urquhart: But what do YOU think?

Lt. General Frederick “Boy” Browning: Well, as you know, I always felt we tried to go a bridge too far…

Yesterday was our first full day back after our Memorial Day outing to Bethany Beach, a day of work as well as catching up. After our day of taking care of business we went and spent time with our friends at Gordon Biersch and then adoring our Papillon pups, I put on the classic film A Bridge too Far as a belated Memorial Day remembrance. For me as a veteran of Iraq the film conjures up images of heroic sacrifices of men and women who died or became victims of a plan gone wrong.

The film if you haven’t seen it depicts the failed Allied attempt of September 1994 to liberate the Netherlands, cross the Rhine and end World War Two by Christmas. It was a plan that depended much on luck, and ignored the capabilities of the Germans, who the Allies for the most part already believed had been beaten following the campaign in Normandy and the dash across France.

Despite the weakness of the Germans he Allied plan came close to succeeding yet failed and in doing so prolonged the war and inflicted much more suffering on the people of the Netherlands who were not liberated until the end of the war. The failure was one of a failed operational plan that had strategic consequences.

In the past few days I have been become even more concerned about the situation on the Korean Peninsula and the risks of a war that could have worldwide implications, and none of them good. Secretary of Defense Mattis warned of a potential catastrophe, even as the USS Nimitz departed the West Coast to join the USS Carl Vinson and USS Ronald Reagan in the operational area while the North Koreans launched more missiles. The concentration of three carrier battle groups, even for a short time provides the President a massive amount of military power in the region should he decide to launch a preemptive strike as he has more than once spoken about. The fact is that if war breaks out that the casualties will be in the hundreds of thousands if not millions, and that is if the war stays contained to the Korean Peninsula.

I am also concerned that a war with North Korea could be the pretext for the Trump administration to sharply curtail civil liberties at home including the freedom of speech and of political opposition. Be assured that if war breaks out on the Korean Peninsula that these rights will be suppressed and that anyone who opposes the government in  any way whatsoever will be labeled as a defeatist, traitor, or worse. We have seen the same pathology after the 9/11 attacks when those who were not opposed to actions agains Al Qaida were condemned because they opposed the expansion of the war into Iraq. I know this because I was one of those people who condemned these people; and sadly in retrospect in their condemnation of the invasion of Iraq they they were more patriotic than me because I supported it, knowing the dangers.

As far as the Allies were concerned Operation Market Garden was a delay in their plans to invade Germany proper, but for the Germans it was a pyrrhic victory which doomed more of their soldiers, civilians, and their victims to death. The Allied efforts were considered a part of a more righteous cause, while for the most part the German people remained under the spell of Hitler until the end, and even then those who opposed or even were thought to be “defeatists” in Germany were considered to be as bad or worse than the enemies of the Third Reich.

Milton Mayer who wrote the book They Thought They Were Free: The Germans 1933-1945 described the thoughts of a German academic colleague in 1955. Mayer’s friend said:

“Once the war began, the government could do anything ‘necessary’ to win it; so it was with the ‘final solution of the Jewish problem,’ which the Nazis always talked about but never dared undertake, not even the Nazis, until war and its ‘necessities’ gave them the knowledge that they could get away with it. The people abroad who thought that war against Hitler would help the Jews were wrong. And the people in Germany who, once the war had begun, still thought of complaining, protesting, resisting, were betting on Germany’s losing the war. It was a long bet. Not many made it.”

That is something I worry about every day here as the Trump administration, facing failure on so many fronts, and under investigation of things that if any of the rest of us had even been accused of them would be considered treasonous, may embark on a war to save itself and at the same time use the extraordinary nature of such a conflict to consolidate power and crush dissent. That may sound far fetched, but all of his actions and words, as a candidate for President, as the President-Elect, and as President point in that direction and his most faithful followers show that they will even commitment treasonous acts and in some cases even resort to violence and murder to support him.

Trust me I want to be wrong about this more than anyone can imagine, but I cannot get rid of the feeling I have in my gut nor the terrible nightmares I have about this several times a week. I wonder if the Trump administration will gamble on an easy victory to end a very real North Korean threat to the region. If they do there will be no good outcome and we may lose freedoms that we never dreamt possible to lose.

If such an action does not succeed will the President then as he always does that his failure was a success? Will he pronounce like Field Marshal Montgomery that the failed attack was 90% successful or even more? And what of his military advisors? I dare not even attempt to answer that question anymore.

So until tomorrow I must ponder the words of General John Buford played by Sam Elliott in the film Gettysburg:

“Devin, I’ve led a soldier’s life, and I’ve never seen anything as brutally clear as this. It’s as if I can actually see the blue troops in one long, bloody moment, goin’ up the long slope to the stony top. As if it were already done… already a memory. An odd… set… stony quality to it. As if tomorrow has already happened and there’s nothin’ you can do about it. The way you sometimes feel before an ill-considered attack, knowin’ it’ll fail, but you cannot stop it. You must even take part, and help it fail.”

Like I said, I want more than anything to be wrong about all of this but I fear that I am not and I cannot shake that feeling. So until tomorrow,

One response to “A Bridge Too Far: History, Dissent, and North Korea”