The Ring-Bolt to the Chain of Our Nation’s Destiny: The Declaration of Independence at 242 Years 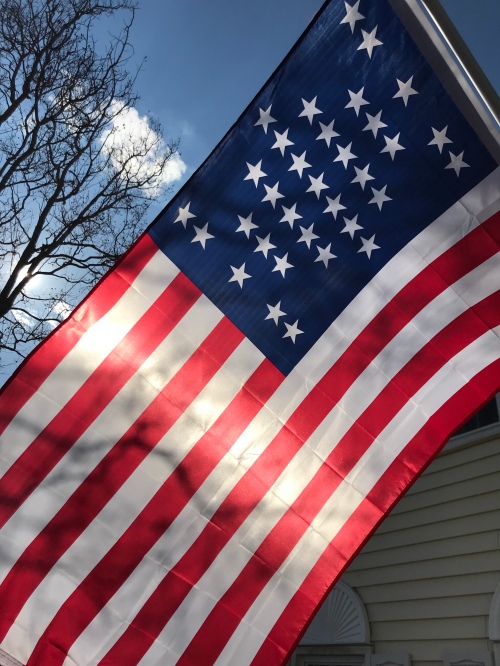 It is July 4th and the 241st anniversary of the declaration by the leaders of 13 colonies of their independence from Britain and the founding on a new nation. It was a nation founded on a principle of the Enlightenment, the principle that all men are created equal, and as their Declaration of Independence noted that as such are “endowed by their creator with certain unalienable rights, among which are life, liberty, and the pursuit of happiness.”

Seventy-six years later the darkness of 1852 not long after the passage of the Compromise of 1850 which included an enhanced Fugitive Slave Act, it would be Frederick Douglass, the foremost Black abolitionist leader and himself an escaped slave would speak. The laws dictated that Northerners had to cooperate in the recapture and re-enslavement of blacks residing in their own states, regardless of their own state and local laws. While the Southern majority that crafted these laws always played the part of the aggrieved minority whose “states rights” were being threatened. But the reverse was true, with their majorities in the House and Senate which also included some Northern Congressmen and Senators, an always compliant White House, and a majority on the Supreme Court the Southerners used the threat of secession and civil war to enforce their mandates on the Free States.

On July 5th 1852 Douglass spoke these words these words to people who at the time were refused citizenship and who were enslaved:

“I have said that the Declaration of Independence is the ring-bolt to the chain of your nation’s destiny; so, indeed, I regard it. The principles contained in that instrument are saving principles. Stand by those principles, be true to them on all occasions, in all places, against all foes, and at whatever cost.”

Douglass understood this far better than many Americans in the South or the North. It would take a great and bloody war for most Americans to realize just how important the Declaration was to the destiny of the nation.  It would take far longer for the principle of an ever expanding understanding of liberty that included Blacks who were considered in law and statute as less than fully human.

One of the most notable of the apologists for White Supremacy was George Fitzhugh, a major Southern slaveholder and apologist for not only slavery but the inequality of poor whites and women. Fitzhugh spoke for many when he wrote against the principles of the Declaration:

“We must combat the doctrines of natural liberty and human equality, and the social contract as taught by Locke and the American sages of 1776. Under the spell of Locke and the Enlightenment, Jefferson and other misguided patriots ruined the splendid political edifice they erected by espousing dangerous abstractions – the crazy notions of liberty and equality that they wrote into the Declaration of Independence and the Virginia Bill of Rights. No wonder the abolitionists loved to quote the Declaration of Independence! Its precepts are wholly at war with slavery and equally at war with all government, all subordination, all order. It is full if mendacity and error. Consider its verbose, newborn, false and unmeaning preamble…. There is, finally, no such thing as inalienable rights. Life and liberty are not inalienable…. Jefferson in sum, was the architect of ruin, the inaugurator of anarchy. As his Declaration of Independence Stands, it deserves the appropriate epithets which Major Lee somewhere applies to the thought of Mr. Jefferson, it is “exuberantly false, and absurdly fallacious.

A greater contrast of views regarding the Declaration is hard to be found. Abraham Lincoln would say about the contrasting views of liberty at a speech in Baltimore on April 18th 1864:

“The world has never had a good definition of the word liberty, and the American people, just now, are much in want of one. We all declare for liberty; but in using the same word we do not all mean the same thing. With some the word liberty may mean for each man to do as he pleases with himself, and the product of his labor; while with others the same word may mean for some men to do as they please with other men, and the product of other men’s labor. Here are two, not only different, but incompatible things, called by the same name, liberty. And it follows that each of the things is, by the respective parties, called by two different and incompatible names–liberty and tyranny.”

Unfortunately these starkly contrasting views of liberty are still on display today. The President called Mexican and Central American refugees an “infestation” using a word that would to describe rats, insects or other disease carrying species. Members of his administration, Republican Congressmen and State Representatives, and members of various “conservative” media outlets, including their allies in the Alt-Right use the same language as Fitzhugh to declare for the superiority of the White race, to dehumanize Blacks, Mexicans, Arabs, and various dark skinned Asians and argue that darker skinned people are less than human and not entitled to liberty, equality and justice. A constant barrage of what quite literally amounts to state sponsored propaganda demonizes minorities, women, gays, the media, long term allies and alliances, and any potential political opponent.

Our Republic, its institutions and our freedom hinge on what Douglass called “the rig-bolt to the chains of our nation’s destiny,” and its principles “saving principles.” We must be dedicated to the proposition that “all men are created equal” or submit to tyranny.

The proposition in the Declaration that all men are created equal is essential to understanding or appreciating liberty. If we view others as below us, as even less than human then we cannot say that we believe in liberty. If we decide to limit the right of citizens to speak out because of their color, their national origin, their race, their religion, their gender, or sexual identity then we are not for liberty, we are no better than George Fitzhugh or others, even the Nazis, who enslaved, imprisoned, and exterminated others in the name of their power, and their right.

If our concept of liberty is so limited by our ideology that we cannot accept others having it or being equal to us then we stand against the very proposition that the United States was founded and we should bury the American experiment and stop lying about a proposition that we no longer believe in. The eminent American jurist wrote these words, which for me are like the Declaration, the Preamble of the Constitution, the Gettysburg Address, Lincoln’s Second Inaugural Address, and Dr. Martin Luther King Jr.’s I Have a Dream speech are secular scripture that are sacred to my understanding of being an American, and something that I will never yield. Judge Hand said:

With that my friends I wish you a happy Independence Day,