They are Not Just Names: September 11th 2001 at Seventeen Years

In Star Trek Deep Space Nine there is a scene where the deputy commander of the Space Station, Major Kira Nerys gives a casualty report to Captain Benjamin Sisko. It resonates with me every time that I see it and especially on the anniversary of September 11th.

KIRA: Sir, the latest casualty reports have just been posted.
SISKO: How many this time?
KIRA: Including the troops lost at AR five five eight, seventeen hundred and thirty.
SISKO: Seventeen hundred thirty.
KIRA: That’s a lot of names.
SISKO: They’re not just names. It’s important we remember that. We have to remember.

Today marks the seventeenth year since the attacks of September 11th 2001 and we do have to remember those who lost their lives that day, all those Americans and our coalition partners who died, and all the innocents lost, even to those of American military action. None of them are just names, they are real men and women, as well as children cut down by terrorism and unending war.

When we were attacked on September 11th 2001 I had already passed twenty years of service, though about half of them were service in the reserves and National Guard. Now I am over 37 years of service and by this time next year I should be on the retired list unless something very unexpected happens.

My base will be marking it with the dedication of a nature trail that now has plaques commemorating over 80 eighty men and women from our base who have died in action, on deployment, or training to go to combat since that occasion. While this ceremony is taking place I will be driving out to a Veteran’s Cemetery an hour or so away to perform the internment of a retired Navy Chief Petty Officer whose family requested me by name.

Thus I will be turning over the big high profile ceremony to my deputy chaplain. It will give him a chance to be on the big stage and get recognized for his own talents and abilities while I do something less visible but very meaningful to that Navy Chief’s family and to me as the son of a Navy Chief. In addition to conducting the service I will have the honor of presenting the colors of the nation to his daughter.

For me it is a chance to pay back the goodness shown to my dad and family when he passed away in 2010. The base ceremony and the internment were pretty close together time wise. My Commanding Officer and I talked about it decided and decided that since I am now in pretty much constant pain with knee and hip injuries since I fell down my stairs last month that I shouldn’t be doing back to back ceremonies with a long drive in between.

But anyway. Since September 11th 2001 I have lost count of the number of friends and comrades who died during the attack and the subsequent wars. This includes those that died by their own hand during or after their service due to the effects of combat trauma, PTSD, or Traumatic Brain Injury,  or the never ending pain of physical wounds and injuries. I often see their faces when I think about the past 17 years, their names are forever etched in my memory, but they are not just names and we cannot forget them. I cannot and I will not.

It seems like every week or so we lose another soldier, sailor, marine, or airman in Afghanistan, Iraq, or Africa. I loom at their names, where they are from, and the number of deployments that they have made. Some entered service well after me but because of their specialities and assignments made far more deployments that I can imagine. One soldier who was killed in action serving in Iraq had made 13 deployments, 9 of which were combat deployments in a 16 year career, and for the most part they are forgotten by all but their family, friends, and comrades, most barely get a mention elsewhere.

Sadly at this point in my career I believe that for many Americans, especially the faux patriots of the Fox News set, the political preachers of the Christian Right, and the President himself, that the troops are merely a prop to place in the background to promote their political causes and slam other Americans for not being patriotic enough.

Today I will continue to serve and I will mourn in my own way the friends, comrades, and shipmates that I have lost over these past 17 years. For me they are not just numbers or names, they are real people and no amount of flag waving will bring them back. No amount of corporate sponsored “patriotism” will make up for the lost lives, and the destruction of these wars. We can remember and honor the lost, and those who still suffer, including the wounded in body, mind, and spirit, and of the widows and children of the men and women who never came home or were never the same. I came home, but I am not the same.

They are not just names.

So as you go about your activities today take time to remember the victims of war, terrorism, and as I do the men and women who I knew who never came home, couldn’t make the transition back from war, or who still suffer in mind, body or spirit. 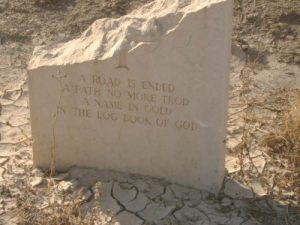 Never forget, they are not just names.