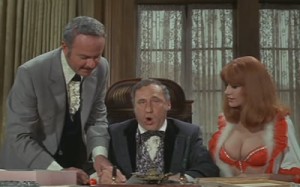 Today President Trump declared a National Emergency, though in his own words “he didn’t need to do it, he just wanted to do it faster.”

A couple of days ago I wrote about the great and trailblazing Mel Brooks film, Blazing Saddles.

It was a film way ahead of its time and two of its characters, Attorney General Headly Lamarr, played by Harvey Kormann, and Governor William  Lepetomaine, played by Brooks himself are a startling premonition of the current President, in their lust for power and incompetence, wrapped in ignorance and racism.

Of course the President’s decision impacts military readiness, infrastructure, and the service men and women who work and live on the bases that will now be deprived of billions of dollars of badly needed infrastructure repairs and improvements just to remain operational. But that doesn’t seem to matter to the President, nor does the Constitutional separation of powers that gives to Congress, and Congress alone the power of the purse. But I digress…

The fact is that the President is doing his damnedest to undermine the rule of law by finding some kind of precedent for something that amounts to an unprecedented federal land grab on the basis of an unprovable national emergency.

Now all the President needs is men to carry it out. Of course, there will be no want of volunteers.

So anyway, as this cracked up Operation gets underway, just remember, Trump won’t be the first nor the last to try find a way around the law and the Constitution to fulfill his agenda, but none will be as funny and to the point as Headly Lamarr and William Lepetomaine. Compared to them, Trump is a pathetically clueless, humorless, and soulless rank amature who believes that he is both witty and smart.

All that being said I cannot beleive that he won’t get away with it. The GOP Senate majority has shown no courage when Trump walks on their Party beliefs and Constitutional responsibilities, and the Courts at this point, God only knows. I hope to be wrong but I don’t expect them to exercise any judicial independence in support of the Constitution and the powers granted to them within it.