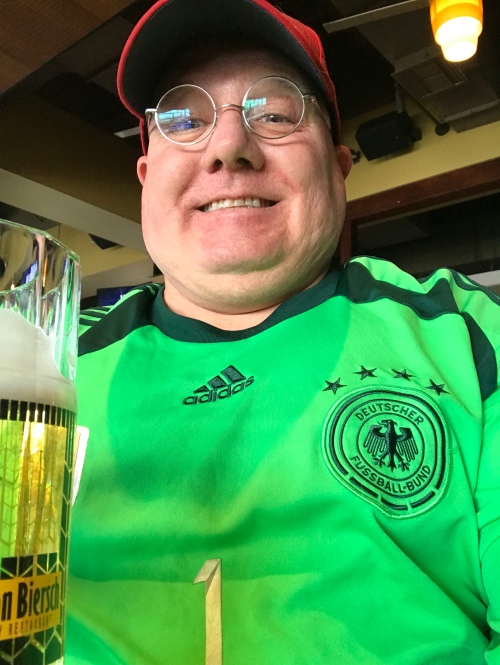 It’s Saint Patrick’s Day and as anyone with 45% Irish DNA should be doing I am donning the green. Of course it happens to be my 2014 German National Team, Manuel Neuer World Cup goalkeeper jersey. Of course I am sporting a red Bayern baseball cap, can’t help that since I watched Bayern München play and absolutely smash Mainz 6-0 while waiting for some friends to come by. during the match James Rodriguez score a hat trick for the first time this season, vastly increasing his value to the team in the last part of the season and maybe for a long time to come.

The win keeps Bayern ahead of Dortmund and increased the goal differential to seven goals. Since both teams are now out of the UEFA Champions League Bayern is going to take this to their 7th straight Bundesliga Championship. Two and a half months ago Dortmund led Bayern by 9 points on the table and what looked like an insurmountable goal differential. Now Bayern is resurgent and the talented but young Dortmund team is struggling. My prediction is that Bayern will win the Bundesliga and Dortmund finish second or third which will put them both in the UEFA Champions League in 2020. 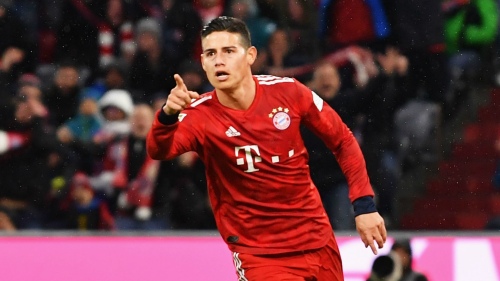 But enough football for today. I may be 45% Irish by DNA and less than 5% German, I am a conflicted mix of Irish, Scottish, and German, with a large amount of English, Welsh, and non German Western Europeans, mostly French Huguenot, I am a man who is quite complex and often quite conflicted.

Conflicts aside, I love German Beer and Irish Whisky. I like European football more than American, and prefer Baseball to Cricket. But that doesn’t matter because my family, regardless of their ancestry or even incestry has been in this country for between 280 and 320 years which means that that I am a very conflicted American. I have many near and distant cousins who are African American, all of which are related to me through white ancestors, and their descendants who just happened to be slave owners, including men on both sides of my family who all fought for the Confederacy and their slave ownership rather than follow the majority in their part of Virginia and side with the Union. They all fought under the flag of the 8th Virginia Cavalry Regiment.

All that being said, I am an American with a highly conflicted genetic stew who happens to be defiant Unionist and abolitionist. I a fully for freedom and the understanding of the Declaration of Independence, and Abraham Lincoln that “all men are created equal,” and that we are engaged in a a conflict that will bring about “a new birth of freedom.” 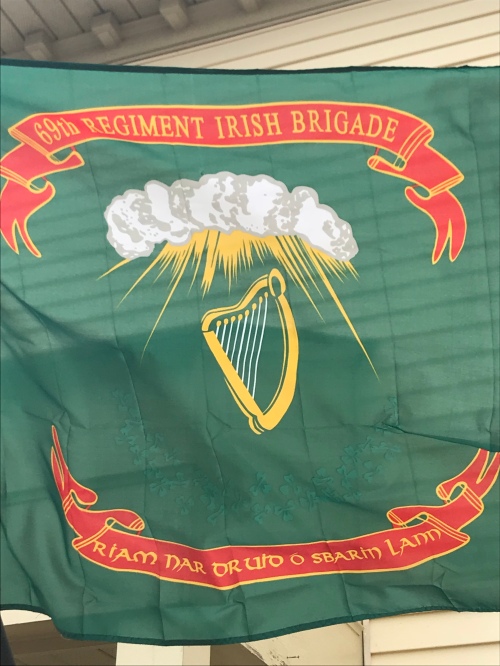 Today outside my home hang the 35 Star Circle Union flag of June 1863 and that of the 69th New York Volunteer Infantry, also known as the 1st Regiment Of the Irish Brigade. I will never display the flag of the 8th Virginia or any other secessionist Regiment at my home in the Virginia Tidewater.

So, in the spirit of my Irish ancestors, even the most distant who fought under the flag of the Union and the regiments of the Irish Brigade I raise my pint glass and say Erin go Bragh!