The Moment that Freedom Of Thought Becomes Impossible: Hatred Of the Other and Blind Ideology 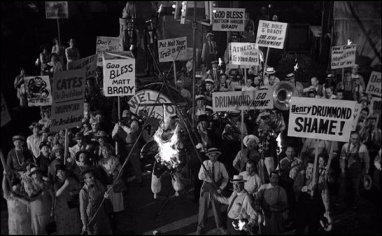 Salman Rushdie one wrote: “The moment you say that any idea system is sacred, whether it’s a religious belief system or a secular ideology, the moment you declare a set of ideas to be immune from criticism, satire, derision, or contempt, freedom of thought becomes impossible.”

We seem to be at another crossroads in Western civilization, a crossroads where the classic liberalism that was the basis for democratic societies is being stampeded by zealots of various persuasions who guided by the supposed infallibility of their ideological belief systems, deliberately and without remorse seek to destroy the institutions that are the guardians of liberty.

We have seen the results of such movements in history before and each time they succeed in gaining power they have brought disaster to nations, and sometimes the world.

Proponents of ideological purity assume that their ideological bias is equivalent to sacred truth, be it a religious or secular truth. The promoters of such systems promote something more than their opinion, as Hannah Arendt noted: “For an ideology differs from a simple opinion in that it claims to possess either the key to history, or the solution for all the “riddles of the universe,” or the intimate knowledge of the hidden universal laws which are supposed to rule nature and man.”  As such, ideology is not based on knowledge, but is distinct from it and the enemy of knowledge for it binds the mind in a straitjacket in which all thought must be submitted to the truth of the ideology. As Arendt noted such ideologies must be handled with caution as they “pretend to be keys to history but are actually nothing but desperate efforts to escape responsibility.”  An ideology protects the believer from having to think for himself, it allows the insecure to grasp at the protection that it allegedly provides, and allows the believer to deny reality, and to by definition declare everything that contradicts the ideology to be heretical, and opponents to be aligned with the devil himself, allowing the believer to hate the opponent. As Eric Hoffer noted, “Hatred is the most accessible and comprehensive of all the unifying agents. Mass movements can rise and spread without belief in a god, but never without a belief in a devil.”

My favorite television character, Raymond Reddington, played by James Spader in The Blacklist once said “I know so many zealots, men and women, who chose a side, an ideology by which to interpret the world. But, to get up every single day and to do the hard work of deciding what to believe. What’s right, today? When to stand up or stand down. That’s courage.” The fact is, no matter how stridently they espouse their beliefs, ideologues are by definition not courageous, because courage takes critical thinking, something that ideologues of any persuasion are incapable of doing.

As for me I consider myself to be a left-leaning progressive. I am pro LGBTQ rights, and despite being against abortion in principle,  I believe that Roe v. Wade and the right of a woman to have an abortion must be upheld. I believe in equality for women and believe that women are held to a much higher standard than men, especially in politics. Likewise I believe that women face far greater discrimination in the workplace, academia, and the military than do men.

I believe that racial prejudice, especially against blacks is still a major problem, but it is not confined to blacks, but Hispanics, Arabs, and Asians. These are mostly the provence of the political Right, the but then there is classic Anti-Semitism, a prejudice and hatred of Jews, and it spans the political and ideological spectrum. I can say that as a historian of the Holocaust and as a gentile Christian.

That being said, to offer criticism of the Government of Israel in its dealings with its Arab and Druse minorities that happen to be Israeli citizens, and to Palestinians who have been the victims of the Pan Arab nationalism of the 1950-1970s, to find themselves abandoned by Egypt, Syria, Lebanon, Jordan, Saudi Arabia, Iraq, and the Gulf States is not being anti-Semitic, it is observing something that is the victimization of a people caught in the middle of a greater political-military struggle.

In 2007 I came across a Palestinian refugee camp at the border of Iraq ans Syria at Al Waleed. Thousands of Palestinian Arabs were marooned there, dependent on th U.N. for food and shelter, and the good graces of Americans and Iraqis for security as they had no place left to go. The new Iraqi government didn’t want people who were allies of Saddam Hussein in their country and drove them to their farthest reaches. Syria, Jordan, Egypt, Saudi Arabia, and the Gulf States didn’t want them either. Likewise, the government that should accept them, the Palestinian Authority didn’t want them and they were not welcome anywhere else in the Arab world. Of course, the Israeli government didn’t want them either. This is an irefruable fact. They were abandoned by all.

As far as Anti-Semitism goes, you don’t have to look hard to find it. Neo-Nazis and Holocaust deniers have cottage industries that attemp to disprove or minimize the Holocaust. Most reside on the political Right, such as in France, the Netherlands, Austria, Hungary, Poland, and in some parts of the German political spectrum. But some too make their home of the Left, the Labour Party in Britain has come under the spell of Jeremy Corbin, a Left Wing anti-Semitic leader if one existed at all. Much of the current anti-Jewish and and Israel propaganda from both the Right and Left is often lifted straight out of The Protoclals Of the Elders Of Zion, not that the polcies of the Netanyahu government are helping anyone.

I happen to be a liberal and progressive realist, but I cannot be an ideologue. That being said I think that the Presdency and policies of the Trump administration exemplify the worst of American racism and exceptualism. Barely educated racist demagogues hold power over a President whose supporters would support him even if he murdered someone on 5th Avenue. Likewise, I think that there are some progressives who are incapable of seeing both sides of an argument and who are as historically as blind, deprived, and ignorant as the most myth bound Christian Conservatives, or other Right Wing anti-Semites. I truly must be a progressive realist in wonderland.

It takes no courage to be an ideologue, and once a person surrenders to an ideology as his or her reason for existence, they sacrifice the ability to reason, the ability to think critically, and the capacity to acquire knowledge. That is the danger of the blind ideologies that are consuming our world today.

Quite obviously, a lot of ideologues from across the spectrum will disagree.