The Battle of Savo Island and Threats to the U.S. Navy Today

Tonight I am going back to my World War II vault and reposting an older article about the Battle Of Savo Island off Guadalcanal. It was the most lopsided defeat in modern American Naval history. It happened a long time ago and in an age where the United States Navy has not lost a ship in combat, other to mines since August 6th 1945, we forget to remember that should a war break out with a near-peer competitor, like the Chinese Communists or the Russians in waterers where they can gain local superiority, or even regional powers such as Iran which could use asymmetric means of large numbers of small missile equipped ships and attack boats, costal submarines, and land based anti-ship missiles in “swarm attacks” to overwhelm technologically superior American ships in confined waters. We have come close to losing major ships, the cruiser USS Princeton and Helicopter Carrier USS Tripoli, to very primitive moored mines during the First Gulf War, the USS Ruben James to a mine during the tanker wars, and the USS Stark which was hit by Iraqi Exocet anti-ship missiles in 1987. Likewise we have come close to losing the Guided Missile destroyers USS Cole (Terrorist attack), USS John S. McCain and USS Fitzgerald (avoidable collisions with merchant ships).

We have been lucky. We won’t be as lucky in a real live shootout today. Ships will be lost, damaged, and sailors will die. Compounding the problem for the United States is that years of focus on Iraq and Afghanistan, failed experiments with reducing crew size (smart-ship), reductions in numbers of ships and sailors to satisfy the budgets needs to the unnecessary invasion of Iraq, and the stress put on remaining ships and aircraft have worn us down. Readiness rates remain down, and we no longer have the shipbuilding and repair facilities to replace losses and repair damaged ships, especially in a war with China.

That is why instead of commenting on today’s news I write about the worst defeat suffered by the U.S. Navy in the modern era, which I label from World War II to the present.

On August 8th 1942 the U.S. Task Force supporting the invasion of Guadalcanal was tired. The crews of the ships had been in continuous combat operations conducting naval gunfire support missions, fending off numerous Japanese air attacks and guarding against submarine attacks for two days. The force commanded by Admiral Richmond K. Turner was still unloading materials, equipment and supplies needed by the men of the 1st Marine Division who they had put ashore on the morning of the seventh.

On the afternoon of the eighth Turner was informed by Admiral Frank “Jack” Fletcher that he was pulling his carrier task force out of action. Fletcher alleged that he did not have enough fighter aircraft (79 remaining of an original 98) and as low on fuel. The carriers had only been in action 36 hours and Fletcher’s reasons for withdraw were flimsy. Fletcher pulled out and left Turner and his subordinate commanders the responsibility of remaining in the area without air support with the transports still unloaded, and full of badly needed supplies and equipment.

As the American drama played out, the Japanese moved forces into position to strike the Americans. Admiral Gunichi Mikawa commander of the 8th Fleet and Outer South Seas Force based at Rabaul New Britain quickly assembled a force of 6 heavy cruisers, the 14,000 ton Atago Class Chokai, and the four smaller ships of the Kako Class, the Aoba, Kako, Kinugasa and Furutaka, the light cruisers Yubari and Tenryu and the destroyer Yunagi. Mikawa raised his flag aboard Chokai and the force sped down “the slot” which ran the length of the of the Solomon’s chain mid day on the seventh.

The Americans had warning of their coming. The first sighting was by B-17s before the Japanese forces had reached Rabaul. The second was the elderly U.S. Navy submarine S-38 at 2000 on the 7th when they were 550 miles away not far from Rabaul. This report was discounted because it would not be unusual to find a number of fleet units steaming near a major naval base and fleet headquarters. The last which should have alerted the allies was a sighting by a Royal Australian Air Force patrol aircraft on the morning of the 8th. However the pilot did not report the sighting until he returned from his mission returned to his base and had his tea. The eight hour delay in reporting the information as well as errors in it which reported 2 submarine tenders as part of the force lulled the Allied forces into believing that the Japanese were setting up a seaplane base and posed no threat to the invasion forces. It was a fatal error of reporting and judgment by the pilot.

USS Astoria on August 8th off Guadalcanal and USS Chicago (below)

In the absence of good information Turner deployed his support ships to cover the three entrances into what soon would be known as Iron Bottom Sound. He placed the Anti Aircraft Cruiser USS San Juan and Australian Light Cruiser HMAS Hobart to the east with two destroyers under the command of Rear Admiral Norman Scott. To protect the south west entrance into the sound south of Savo Island Turner placed the Heavy Cruisers USS Chicago, HMAS Australia and HMAS Canberra and two destroyers under the command of Rear Admiral R.A.C. Crutchley RN who in theory commanded the screening force. To the north of Savo he deployed the Heavy Cruisers USS Vincennes, USS Astoria and USS Quincy and two destroyers under the tactical direction of Captain Frederick Riefkohl aboard Vincennes. To the west of Savo he placed two destroyers to act as picket ships. Unfortunately these ships radar sets were insufficient and would fail to pick up the approaching enemy. 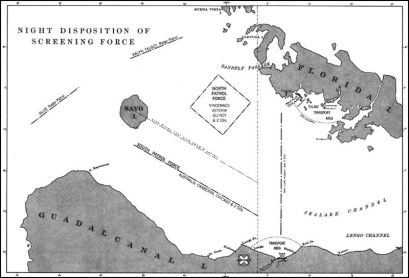 During the early evening Turner recalled Crutchley to his flagship for consultations of what to do regarding Fletcher’s retreat. Crutchley came over in his flagship the Australia denuding the southern force of its commander as well as one of its three heavy cruisers. He left the commanding officer of Chicago Captain Howard D. Bode in tactical command but Bode did not have his ship take the lead position in the patrol assuming Crutchley would return bymidnight. 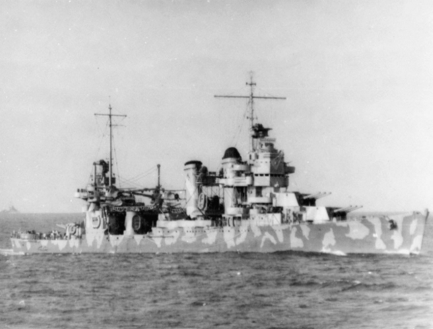 USS Vincennes (above) and USS Quincy (below)

Mikawa launched float planes to scout the locations of the American ships and to provide illumination once the battle began. Some of these aircraft were spotted but no alert measures were taken as many assumed the Japanese to be friendly aircraft. Many commanding officers were asleep or resting away from the bridge of their ships, lookouts were tired and not expecting the Japanese and Condition Two was set in order to provide some of the tired crews a chance to rest. 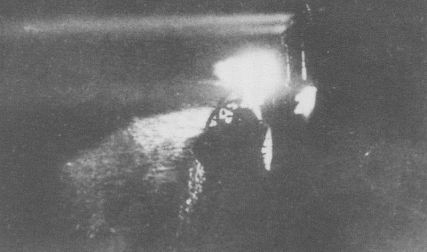 Admiral Mikawa now new the Allied disposition and ordered his ships to battle stations at 0045. At 004 he sighted and passed astern of USS Blue the southern picket which also failed to detect the Japanese force. Mikawa assumed that the destroyer might have reported his presence, briefly turned north but turned back to his original course when a lookout allegedly spotted a destroyer to his northeast. He gave the order to attack at 0132 and promptly spotted the American destroyer USS Jarvis which had been heavily damaged and without radio communications was making her way toAustralia for repair and passed her after some ships fired torpedoes and raced toward the southern force at 26 knots. With the southern force just a few miles away Mikawa ordered his ships to commence firing at 0136 and at 0138 torpedoes had been launched.

Mikawa’s lookouts spotted the northern group at 0144 and changed course. The maneuver was badly executed and left the Japanese in two columns as they swiftly closed on the Americans. Mikawa’s flagship Chokai launched torpedoes at 0148 and Astoria the cruiser closest to the Japanese set general quarters at 0145 and at 0150 the Japanese illuminated her with searchlights and opened fire. Astoria under the direction of her gunnery officer returned fire at 0152 ½ just before her Captain came to the bridge unaware of the situation. He ordered a cease fire until he could ascertain who he was firing at assuming the Japanese to be friendly ships. He delayed 2 minutes and ordered fires commenced at 0154 but the delay was fatal. Astoria had opened fire on the Chokai which then had time to get the range on the American cruiser and hit her with an 8” salvo which caused fires which provided the other Japanese ships an aiming point. 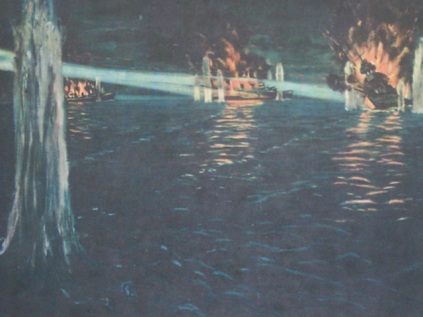 Astoria was left burning and heavily damaged barely maintaining headway but attempted to fight on scoring a hit on Chokai’s forward turret even as the Japanese opened up on the next cruiser in line the USS Quincy. Quincy caught between the two Japanese columns. Aoba illuminated her with her searchlight and Japanese forces opened fire. The gunnery officer order Quincy to return fire getting two salvos off before her skipper Captain Samuel Moore came to the bridge, briefly ordered a cease fire assuming that he was firing on Americans and turned on his running lights. Quincy was ripped by salvo after salvo which killed Captain Moore and nearly everyone in the pilothouse just as a torpedo ripped into her engineering spaces turning them into a sealed death trap forcing the engineer to shut down the engines. Burning like a Roman candle Quincy was doomed she was ordered abandoned and capsized and sank at 0235. However Quincy did not die in vain, at 0205 two of her 8” shells hit Chokai causing enough damage the Admiral’s chart room that Mikawa would order a withdraw at 0220 which spared the now defenseless American transports. 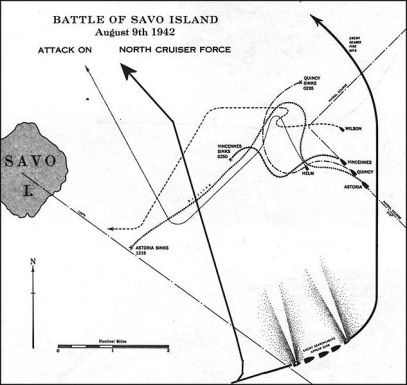 Vincennes, the lead ship and flagship was next in the line of death. Captain Reifkohl order General Quarters sounded not long after the Japanese illuminated the southern group. At 0150 Vincennes was lit up by the searchlights of three Japanese ships which opened fire on her. Vincennes returned fire at 0153 hitting Kinugasa before she was hit starting fires on her scout planes mounted on their catapults. The Japanese mauled Vincennes, three possibly four torpedoes ripped into her as shells put ever gun out of action. At 0215 she was left burning and sinking by the Japanese who soon withdrew from the action. Ordered abandoned she sank at 0250.

HMAS Canberra being evacuated by the Patterson and Blue

Canberra struggled against the odds but was abandoned and was sent to the bottom by an American torpedo at 0800. Astoria also struggled for life but the damage was too great and she was abandoned sinking at 1215. Mikawa withdrew up the sound but on his return the Heavy Cruiser Kako 70 miles from home was sunk by torpedoes from the American submarine S-44 sinking in 5 minutes.

It was an unmitigated disaster, an allied force destroyed in less than 30 minutes time. Boards of inquiry were held and Captain Bode hearing that he shouldered much blame killed himself in 1943.

Wrecks of the USS Quincy, Astoria, Vincennes, and HMAS Canberra

It was a rude awakening to a Navy which had believed that technical advances would give it victory and which  in the words of Admiral Ernest King  was not yet “sufficiently battle minded.” It was the first of many equally bloody battles in the waters around Guadalcanal which in the coming campaign became known as Ironbottom Sound.