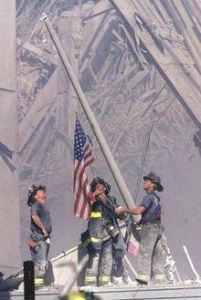 I am thinking about the morning after the attacks of 9-11-2001 and how much my perspective has changed since those attacks. On Wednesday 9-12-2001 I was sleeping in my office on a cot and sleeping bag at Camp LeJeune, NC. In fact every Marine and Sailor assigned at Camp LeJeune was doing the same thing unless they were on leave out of the area and couldn’t get back.

The base was closed to visitors, internal road blocks on the base were set up, roving patrols and outposts covered any conceivable entrance to the base, by land or water. Combat air patrols out of MCAS Cherry Point flew overhead while Navy Guided Missile Cruisers and Destroyers patrolled off the coast. The base was locked down for four days. We had little information of what was happening, except what we could get on television. Our own intelligence didn’t have much more, but we all knew that we were going to war.

Within the month we knew that it would be in Afghanistan. Army Special Forces, Rangers, Units of the 82nd Airborne as well as Navy SEALS, a Marine Expeditionary Unit, and CIA operators working with the Afghan warlords of the Northern Alliance quickly drove the Taliban from power and Osama Bin Laden and his Al Qaeda operatives into hiding at Tora Bora.

But the roots of this tragedy were decades in the making. In the 1960s and early 1970s, Afghanistan was one of the most progressive nations in the Islamic World. It was a haven and destination for the hippies in the 1960s and 1970s. Then, in a Cold War maneuver, the Soviets helped the Afghan Communist Party gain power in a coup against the monarchy.  The reaction of the Taliban and other religious conservatives ignited a civil war in which the Soviets sent in hundreds of thousands of combat troops to prop up the Communist government, while the United States supported the Taliban, whose leaders were supported and personally met with President Ronald Reagan, and equated to our Founding Father’s.

But the 9-11 attacks had nothing to do with Afghanistan, other than the fact that the Taliban had granted Bin Laden and Al Qaeda sanctuary there under Islamic tradition. Bin Laden and his minions attacked the United States because we had stationed troops and aircraft in Saudi Arabia, the cradle of Islam for a decade after deploying them in the wake of Saddam Hussein’s invasion of Kuwait in 1990. Religious Saudis, especially the militant fundamentalists like Bin Laden didn’t see our personnel as defenders of Saudi Arabia, but infidels who were crusaders and invaders that had no business there. Sometimes in terms of religion, history means more than contemporary politics or international relations.

Likewise, the gross  error of the Bush Administration to lump traditional enemies, the Iraqis and Iranians who’s disputes go back a millennium as partners in an Axis Of Evil sounded good on American television but were diametrically opposed to the Sunni- Shia Islamic divide, in fact Iraq had nothing to do with the attack and the Iranians were willing to work with us against Al Qaeda, which they considered a mortal Sunni enemy. But then again, to most Americans there is little difference between an Iraqi, Saudi, Iranian, Yemeni, Jordanian, Syrian, or Lebanese, even if they are not of the Islamic faith. The fact is that most Americans regardless of the political ideology are completely ignorant about history and religious history matters not. It is what it is and in the words Kurt Vonnegut “So it goes.”

Our wars or retribution in Afghanistan, Iraq, Syrian, Somalia, and other countries have cost more than double the amount of lives lost on 9-11-2001. That does not includes the tens of thousands wounded Americans. This does not count the thousands dead and wounded of NATO and coalition partners, including the Afghans and Iraqis who supported us, and the hundreds of thousands of innocent victims of the wars that we have pursued for the past 18 years.

I was astounded that President Trump had initially agreed to meeting with the Taliban in order, for all practical reasons, surrender to them last weekend, the weekend before the anniversary of the attacks of 9-11-2001. The deal would have ensured a withdrawal of American troops, no sanctions on Al Qaeda, and no protections for the Afghan people who supported us over the last 18 years. I am tired of this war, but to abandon people who supported us just to gain peace wreaks of how we abandoned the South Vietnamese.

Back then we were not afraid to take in the South Vietnamese and Cambodian refugees, but under Trump we would leave the people we fought for and who fought with us to death. The Trump administration does not care about them because they are dark skinned and Muslim. It would be a stab in the heart of our national ideals, and for that I am glad that those talk fell through, not that I support the loss of another life, of any nationality or religion in this war. I have lost too many friends, beginning with Army LTC Karen Wagner who died at the Pentagon on 9-11, to others who died in combat in Iraq, and Afghanistan to accept such an action that is only designed to get the President the Nobel Peace Prize. I couldn’t give a damn about the President’s narcissism and need for approval, and his need to get a Nobel Peace Prize because Barack Obama already has one.

As for me, I did a lot of thinking about what happened 18 years ago, the people, the victims, and those that continue to suffer because of those attacks and the subsequent wars which have followed.

On Wednesday September 12th I woke up to a new world, and over the process of years my life was changed. We had a 9-11 Memorial on my base today. It was touching because it was about the events and the people. My new young chaplain did well in his part, the baton has been passed to a new generation. I just hope for their sake that war will not be the norm in the future. I hope that our leaders and other world leaders will seek peace rather than war. Otherwise we are doomed.