A Pilgrimage to Dachau 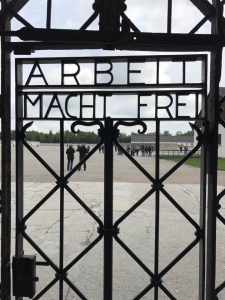 Sunday, I made pilgrimage to the Concentration Camp at Dachau outside of Munich. I took the S-Bahn, a local commenter train from the Ostbahnhof near the hotel I am staying at to Dachau. Then I walked the approximately two and a half miles from the Dachau Bahnhof to the camp, following the same route as the  men and women, Gentile and Jew, that arrived at the camp following its establishment in 1933.

The weather suited the occasion, while not cold at all, there was cloud cover, sometimes thin enough to let a little bit of the sun shine through. As I walked down the streets I noted that many were named for victims who were either imprisoned at Dachau, or later killed at the camp, or sent to Auschwitz, Buchenwald, or other places where they were murdered.

Dachau was initially established as an extrajudicial place of incarceration and punishment shortly after Hitler’s seizure of power in 1933, by the local Munich Nazi Party and its SS under control of the Nazi Police President of Munich, Heinrich Himmler. The first prisoners were political prisoners transferred from the Stadelheim prison in Munich, and the Landsberg prison not too far away. However, under the initial administration of Hilmar Wäkerle, managed to engage in practices so disgusting that Himmler relieved him and placed Theodor Eicke in charge. Eicke, was certainly cruel, but he insisted on controlled violence against the prisoners. Under his command the camp became the model for all other concentration camps, and many of his subordinates went on to command some of the worst of them. The rules for guards and prisoners alike became the regulations for all concentration camps.

The cynical motto that Eicke placed at the gate of Dachau, “Arbeit Macht Frei”  found its way to the notorious camp at Auschwitz, under the command of Rudolf Höss who had served under Eicke at Dachau.

While not a “death camp” per say, an estimated 30,000 prisoners were murdered there and tens of thousands of others sent to the death factories in Poland, including Auschwitz.

Unlike the past I did not go to the museum. Instead I walked, meditated, and remembered the evil perpetrated at Dachau and the other camps. Of course there were many people from all over the word there. Some were on guided tours, others  using the mobile device for tours, but there was a certain respect for the dead and what happened at Dachau that I have seen at many of America’s historic sites, including Gettysburg.

I will continue to walk, remember, and bear witness even as the perpetrators, victims, and bystanders of the times pass away. In fact I need to get back to work on that book and my proposal to my agent for it.

Tomorrow is already here for us in Munich, so I wish you a good evening.