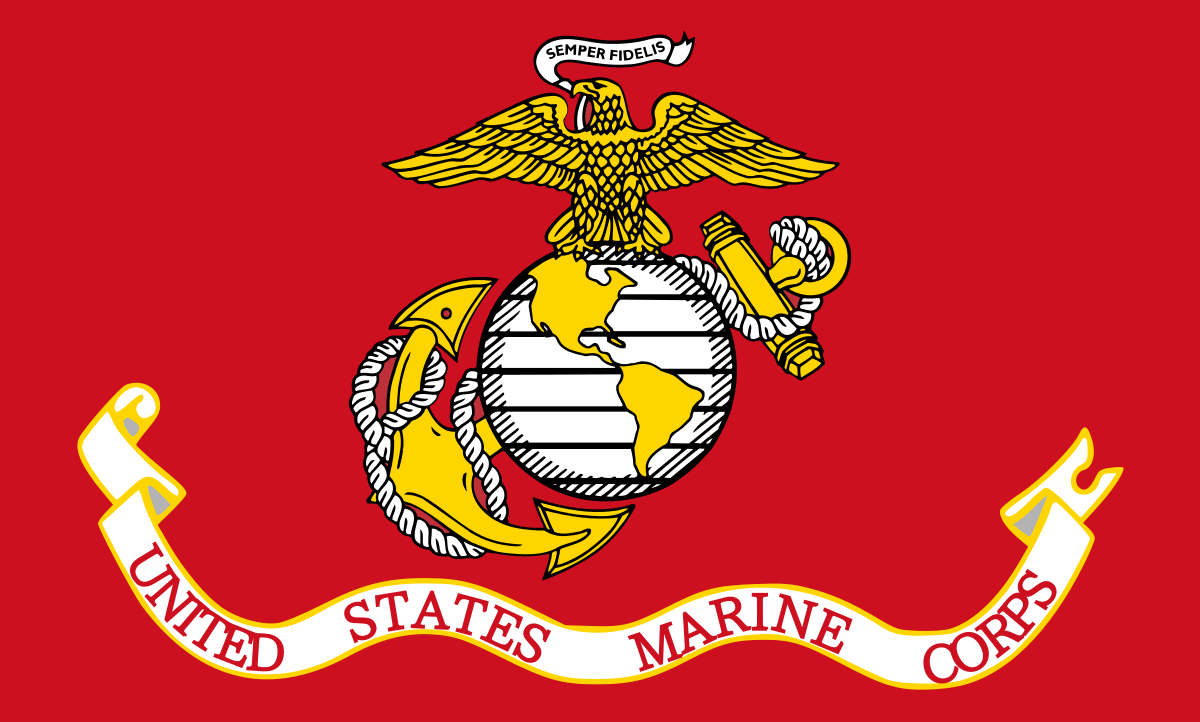 i will take a momentary break from politics and everything else to wish all United States Marines a Happy 244th Birthday. This one is more special than many others because my nephew Darren is now a Marine.

Honestly, after all that we have been through as a country this year, today is one of these days where I just want to wish people well. Those men and women are those of the United States Marine Corps, with whom I have have spent almost ten years of my thirty-five year military career assigned to or in support of as a chaplain. Today is the 244th anniversary of the establishment of the Marine Corps and its founding at Tun Tavern, in Philadelphia. Today I wish all those who have served past, present and future, especially those who I have served alongside a happy birthday.

On November 10th 1775 the Continental Congress passed a resolution that stated:

Resolved, that two Battalions of Marines be raised consisting of one Colonel, two Lieutenant Colonels, two Majors & Officers as usual in other regiments, that they consist of an equal number of privates with other battalions; that particular care be taken that no persons be appointed to office or enlisted into said Battalions, but such as are good seamen, or so acquainted with maritime affairs as to be able to serve to advantage by sea, when required. That they be enlisted and commissioned for and during the present war with Great Britain and the colonies, unless dismissed by Congress. That they be distinguished by the names of the first & second battalions of American Marines, and that they be considered a part of the number, which the continental Army before Boston is ordered to consist of.

The history of the Marine Corps is one of the most fascinating of any armed service in the world. Starting out as a tiny force attached to Navy ships and shipyards the Corps has gained prominence as one of the premier fighting forces ever assembled. Flexible and deployable anywhere in the world on short notice the Marine Corps has seen action in “every place and clime” and continues to serve around the world.

In 1775 a committee of the Continental Congress met at Philadelphia’s Tun Tavern to draft a resolution calling for two battalions of Marines able to fight for independence at sea and on shore.  The resolution was approved on November 10, 1775, officially forming the Continental Marines. The first order of business was to appoint Samuel Nicholas as the Commandant of the newly formed Marines. 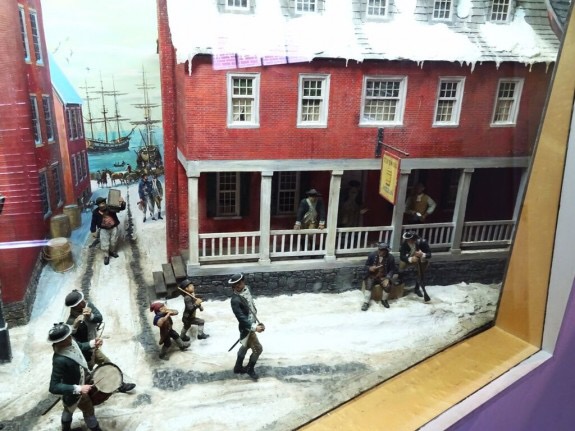 Robert Mullan the owner and proprietor of the said Tun Tavern became Nicholson’s first captain and recruiter. They began gathering support and were ready for action by early 1776.  They served throughout the War for Independence and like the Navy they were disbanded in April 1783 and reconstituted as the Marine Corps in 1798. 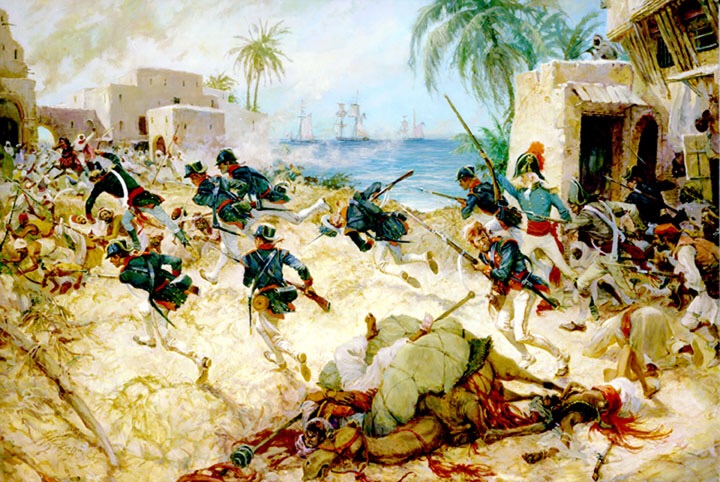 The Marines served on the ships of the Navy in the Quasi-war with France, against the Barbary Pirates where a small group of 8 Marines and 500 Arabs under Lieutenant Presley O’Bannon made a march of 500 miles across the Libyan Desert to lay siege Tripoli but only reached Derna. The action is immortalized in the Marine Hymn as well as the design of the Marine Officer’s “Mameluke” Sword. They served in the War of 1812, the Seminole Wars and in the Mexican-American War where in the storming of the on Chapultepec Palace they continued to build and enduring legacy. In the months leading up to the Civil War they played a key role at home and abroad.  In October 1859 Colonel Robert E. Lee led Marines from the Marine Barracks Washington DC to capture John Brown and his followers who had captured the Federal Armory at Harper’s Ferry. 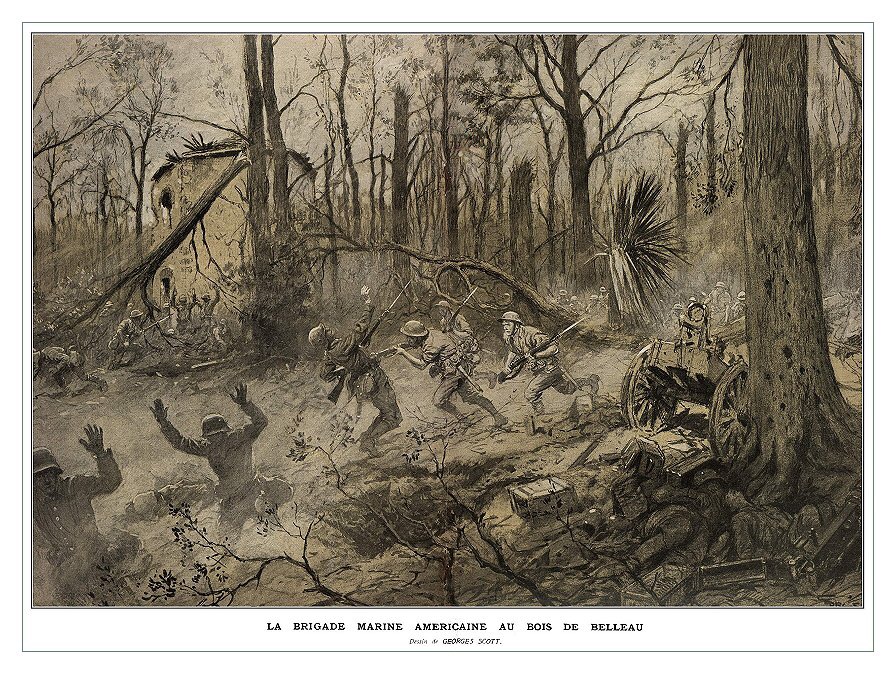 The Corps would serve through the Civil War and on into the age of American Expansion serving in the Spanish American War in the Philippines, Puerto Rico and Cuba where they seized Guantanamo Bay at the battle of Cuzco Wells.  The would serve in China and be a key component of the international force that defended foreign diplomats during the Boxer Revolt as well as the international force that would relieve the diplomatic compound in Peking (Beijing).  In World War One the Marines stopped the German advance at Chateau Thierry and cemented their reputation as an elite fighting force at Belleau Wood where legend has it that the Germans nicknamed them Teufelhunden or Devil Dogs, a name that they Marines have appropriated with great aplomb. 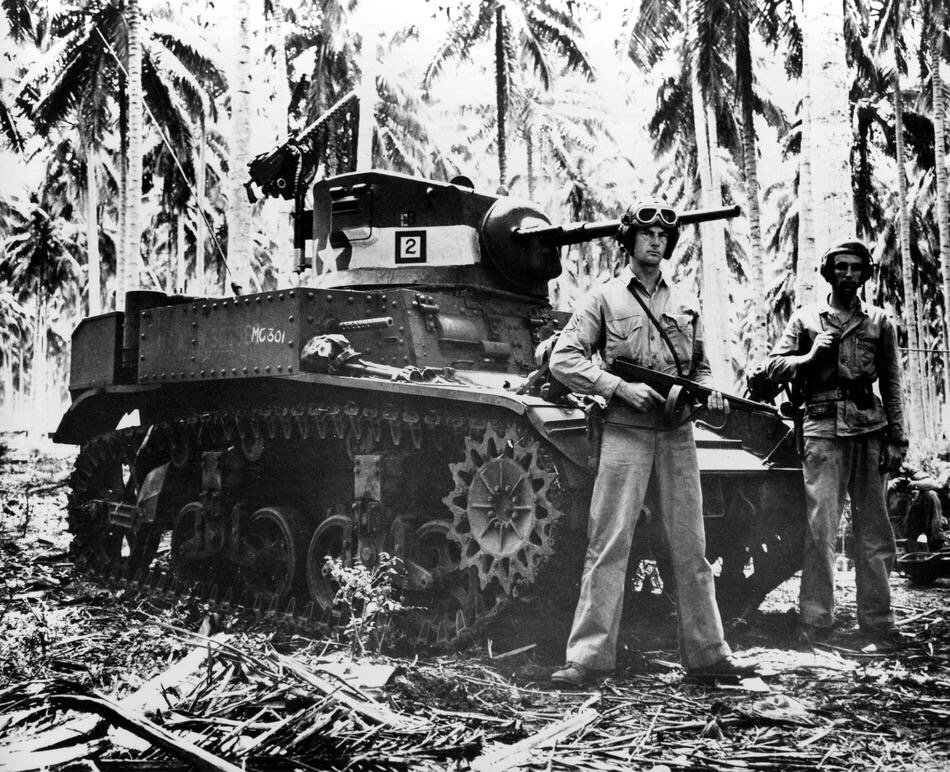 During the inter-war years the Marines were quite active in the Caribbean and Asia and also developed amphibious tactics and doctrine that would be put to use in the Pacific Campaign.  During the war the Marines served in all theaters but won enduring fame at Wake Island, Guadalcanal, Tarawa, Iwo Jima, Okinawa and numerous other battles in the Pacific war. Marine Aviators flew in some the most desperate actions in the war to support the Navy and amphibious operations ashore. 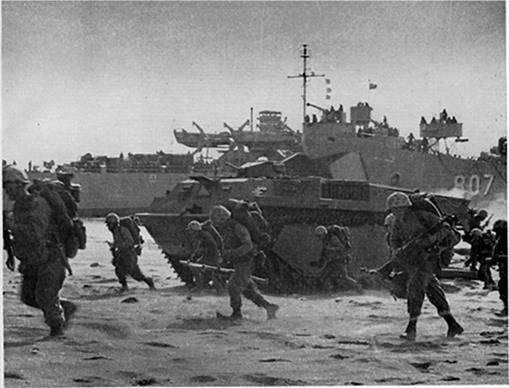 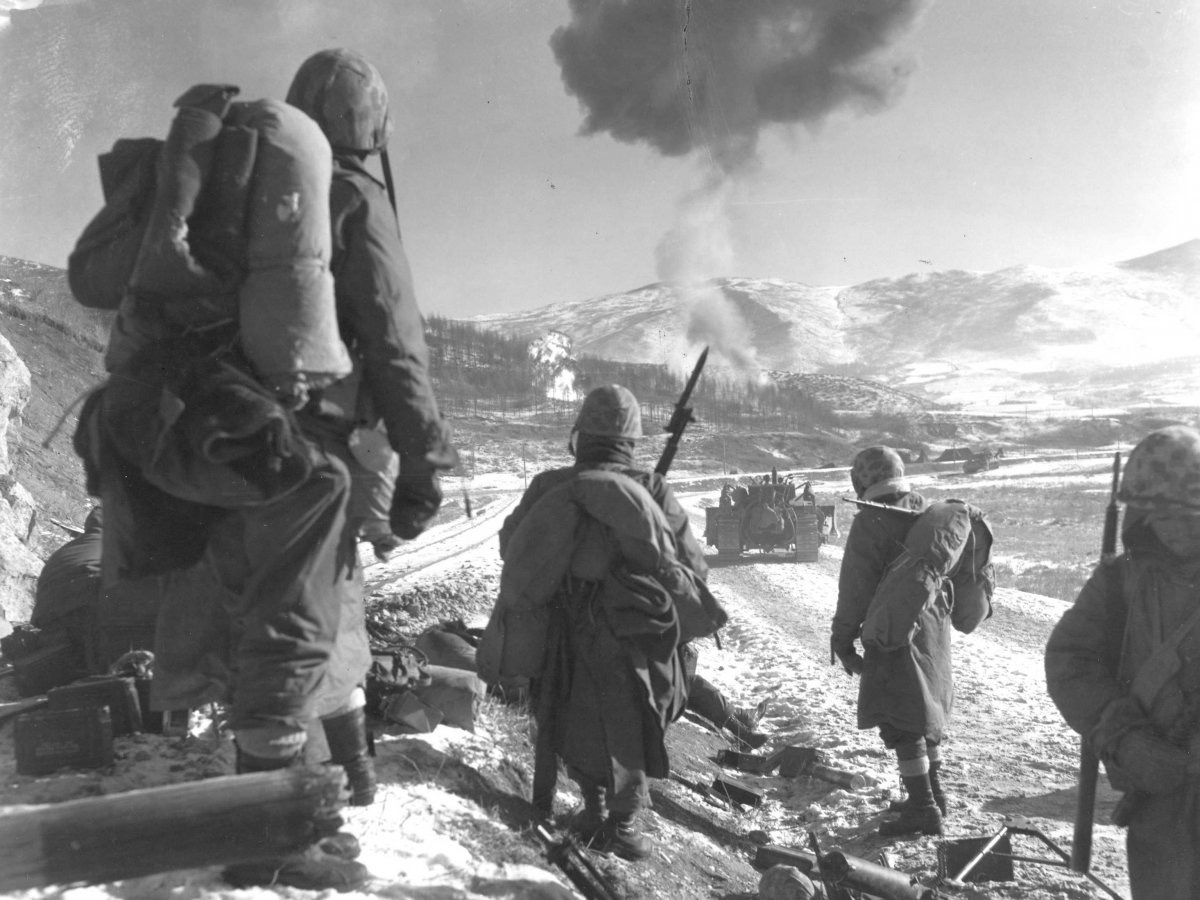 After the war the Truman Administration sought to eliminate the Marine Corps but the Corps was saved by the efforts of Americans across the country and Marine supporters in Congress.  That was a good thing because the Marines were instrumental in keeping the North Koreans from overrunning the South during the Korean War on the Pusan Perimeter, turned the tide at Inchon and helped decimate Communist Chinese forces at the Chosin Reservoir.  After Korea the Marines would serve around the World in the Caribbean and Lebanon and in Vietnam where at Da Nang Keh Sanh, Hue City, Con Thien fighting the North Vietnamese and their Viet Cong allies.  The Marines took the initiative to implement innovative counter insurgency measures such as the Combined Action Platoons which enjoyed tremendous success until they were shut down by the Army high command.  These lessons would serve the Marines well in the new millennium during the Anbar Awakening in Iraq which changed the course of that insurgency and war.

The Marines would again be involved around the World after Vietnam serving in the Cold War, in Lebanon and the First Gulf War which was followed by actions in Somalia, the Balkans and Haiti. After the attacks of September 11th 2001 the Marines were among the first into Afghanistan helping to drive the Taliban from power. In the Iraq Campaign the Marines had a leading role both in the invasion and in the campaign in Al Anbar Province.  After their withdraw from Iraq the Marines became a central player in Afghanistan where they were engaged around Khandahar and in Helmand Province. In the wake of the ISIS gains in Syria and Iraq the Marines returned to Iraq serving to help train and advise Iraqi Army units in areas of Al Anbar Province and other areas of that country, while others have been involved in relief efforts in Puerto Rico following Hurricane Maria. If by some chance war breaks out on the Korean Peninsula, Marines will be among the first to respond.

The Marines are elite among world military organizations and continue to “fight our nations battles on the air and land and sea.” The Corps under General John LeJeune institutionalized the celebration of the Marine Corps Birthday and their establishment at Tun Tavern. General LeJeune issued this order which is still read at every Marine Corps Birthday Ball or observance:

On November 10, 1775, a Corps of Marines was created by a resolution of Continental Congress. Since that date many thousand men have borne the name “Marine”. In memory of them it is fitting that we who are Marines should commemorate the birthday of our corps by calling to mind the glories of its long and illustrious history.

The record of our corps is one which will bear comparison with that of the most famous military organizations in the world’s history. During 90 of the 146 years of its existence the Marine Corps has been in action against the Nation’s foes. From the Battle of Trenton to the Argonne, Marines have won foremost honors in war, and in the long eras of tranquility at home, generation after generation of Marines have grown gray in war in both hemispheres and in every corner of the seven seas, that our country and its citizens might enjoy peace and security.

In every battle and skirmish since the birth of our corps, Marines have acquitted themselves with the greatest distinction, winning new honors on each occasion until the term “Marine” has come to signify all that is highest in military efficiency and soldierly virtue.

This high name of distinction and soldierly repute we who are Marines today have received from those who preceded us in the corps. With it we have also received from them the eternal spirit which has animated our corps from generation to generation and has been the distinguishing mark of the Marines in every age. So long as that spirit continues to flourish Marines will be found equal to every emergency in the future as they have been in the past, and the men of our Nation will regard us as worthy successors to the long line of illustrious men who have served as “Soldiers of the Sea” since the founding of the Corps.

So to all my Marine Corps friends, and any other Marines who read this piece, have a great night and Semper Fidelis.

Filed under History, iraq,afghanistan, Military, shipmates and veterans, Tour in Iraq, US Marine Corps, US Navy, War on Terrorism, world war one, world war two in the pacific