It is still so hard to believe that thirty-four years ago we were stunned to see the Space Shuttle Challenger blow up shortly after launch from Cape Canaveral, Florida.

I don’t know about you, but it shocked the hell out of me. I am a child of the 1960s and 1970s when the United States was setting the pace on the exploration of space. Manned missions to the moon had become commonplace, the Space Shuttle Program appeared to be a jumping off point for further exploration. Space stations that would be able to conduct scientific research and maybe even serve as launching and logistics centers for the exploration of Mars and beyond.

Back when I was a kid and young adult the space program captivated us, and coupled with the hope presented in Star Trek, where human beings of all races and nationalities would work with alien races who had similar values explored the far reaches of the galaxy, anything seemed possible. Then, in one moment, the dream imploded as the Challenger exploded. Truthfully, it hasn’t been the same since.

That afternoon I was still at work as the Commanding Officer of the 557th Medical Company, (Ambulance). It was about 20 minutes till six and I was completing paperwork from an Article 15 proceeding, and looking over our end of the month Unit Status Report (USR) drafts.

It was about that time that my Charge Of Quarters, Specialist Lisa Dailey came charging into my office. She cried out “Lieutenant Dundas, the Space Shuttle just blew up!” I looked up from my paperwork and said, “Don’t be silly, space shuttles don’t blow up.” Such was my faith in technology and the dreams of the space program and Star Trek in my mind. 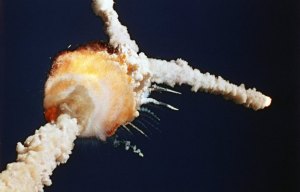 She couldn’t believe my response, because she had just seen it in real time. That was not long after the Armed Forces Network or AFN started broadcasting CNN and other U.S. based news programs in real time. CNN just happened to be televising the launch of Challenger. Specialist Dailey, who I still remain in contact with said “no sir, I just saw it, it’s on TV right now.” 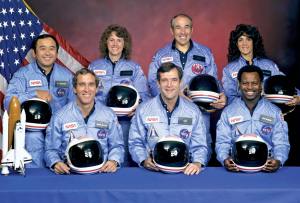 With that I got up and went with her to the television where I stood transfixed as I watched the endless replays of the event. It was so unbelievable. Never before had a U.S. space mission failed to at last get into space, and it was a body blow to the space program. The shuttle program continued, but it wasn’t the same. There were many more successful missions, many in support of the International Space Station, but they became routine and many people didn’t follow them. Truthfully, I was like many people, I didn’t pay much attention to them after the Space Shuttle program regained steam and achieved success after success.

But then, some seventeen years later on February 1st 2003 I was sitting drinking coffee in the Wardroom Of the USS HUE CITY, waiting for the arrival of General Peter Pace, Vice Chairman of the Joint Chiefs of Staff, and Veteran of the Battle Of Hue City. General Pace was our guest speaker at the annual,Battle Of Hue City Memorial. He was remembered fondly by the Marines who served with him at Hue City as their Lieutenant. As I waited the wardroom Television was tuned to CNN which was covering the re-entry of the Space Shuttle Columbia. As I watched the coverage Columbia broke up on re-entry over Texas and Louisiana. General Pace was delayed in his arrival due to an emergency meeting of the National Security Council, but he did arrived. However, for the seconded time in my life I witnessed the destruction of a Space Shuttle, but by then I would never again make the comment “Don’t be silly, Space Shuttles don’t explode.”

Honestly, I want to live to see the day when human beings land of Mars, and to really dream when humanity achieves the capacity for faster than light space travel, or as it is called in Star Trek, “Warp Speed.” I would love to live to see first contact with a friendly Alien race like the Vulcans of Star Trek. I still dream, but I know that there are risks, and that in such undertakings that lives will be lost, that there will be tragedies, but that is the price of human progress.

As the entity called Q told Jean Luc Picard in the Star Trek Next Generation episode Q Who:

“If you can’t take a little bloody nose, maybe you ought to go back home and crawl under your bed. It’s not safe out here! It’s wondrous, with treasures to satiate desires both subtle and gross…but it’s not for the timid.”

I remember and mourn those lost aboard Challenger and Columbia, but I pray that their sacrifice in the name of humanity will not be forgotten, nor their quest abandoned.