One Republican Senator of Moral Courage and Clarity: Mitt Romney and Impeachment 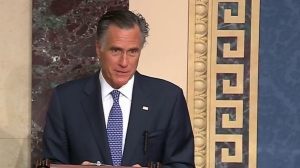 The foreordained impeachment trial of President Trump is over. Fifty-Two GOP Senators prostrated themselves on the altar of Trump, primarily because they were afraid of him and his followers. Of course since some of the highest ranking of the GOP Senators publicly admitted that they would not be an “unbiased jury” even before taking the oath that required them to do that during the impeachment trial.

Only one, Senator Mitt Romney had the courage to vote for impeachment. I was getting seen by a doctor and waiting for prescriptions to be filled to see any of it. However, I did read Senator Romney’s speech announcing his vote and it was a monumental speech for a Senator to go against a sitting President of his own Party. The only action I can compare it to is the passionate leadership and opposition by Senator Stephen A. Douglas to the attempt of the Buchanan Administration and the Southern Democratic Senators trying to bypass the law to have Kansas admitted as a Slave State in 1858. (see my 2015 article https://padresteve.com/2015/10/09/17673/.) Such an event seldom happens unless there is such a great divide and animosity between the parties, or divisive sectionalism.

But Romney, though he has voted with Trump and the Republicans 80% of the time, cast party loyalty to the wind and placed Country and Constitution over it, proclaimed in the Well of the Senate:

The Constitution is at the foundation of our Republic’s success, and we each strive not to lose sight of our promise to defend it. The Constitution established the vehicle of impeachment that has occupied both houses of Congress for these many days. We have labored to faithfully execute our responsibilities to it. We have arrived at different judgments, but I hope we respect each other’s good faith.

The allegations made in the articles of impeachment are very serious. As a Senator-juror, I swore an oath, before God, to exercise “impartial justice.” I am a profoundly religious person. I take an oath before God as enormously consequential. I knew from the outset that being tasked with judging the president, the leader of my own party,would be the most difficult decision I have ever faced. I was not wrong.

The historic meaning of the words “high crimes and misdemeanors,” the writings of the Founders and my own reasoned judgment convince me that a president can indeed commit acts against the public trust that are so egregious that while they are not statutory crimes, they would demand removal from office. To maintain that the lack of a codified and comprehensive list of all the outrageous acts that a president might conceivably commit renders Congress powerless to remove a president defies reason.

With regards to Hunter Biden, taking excessive advantage of his father’s name is unsavory but also not a crime. Given that in neither the case of the father nor the son was any evidence presented by the president’s counsel that a crime had been committed, the president’s insistence that they be investigated by the Ukrainians is hard to explain other than as a political pursuit. There is no question in my mind that were their names not Biden, the president would never have done what he did.

The defense argues that the Senate should leave the impeachment decision to the voters. While that logic is appealing to our democratic instincts, it is inconsistent with the Constitution’s requirement that the Senate, not the voters, try the president. Hamilton explained that the Founders’ decision to invest senators with this obligation rather than leave it to voters was intended to minimize—to the extent possible—the partisan sentiments of the public.

This verdict is ours to render. The people will judge us for how well and faithfully we fulfilled our duty. The grave question the Constitution tasks senators to answer is whether the president committed an act so extreme and egregious that it rises to the level of a “high crime and misdemeanor.”

The president asked a foreign government to investigate his political rival.

The president withheld vital military funds from that government to press it to do so.

The president delayed funds for an American ally at war with Russian invaders.

The president’s purpose was personal and political.

Accordingly, the president is guilty of an appalling abuse of the public trust.

What he did was not “perfect.” No, it was a flagrant assault on our electoral rights, our national security interests, and our fundamental values. Corrupting an election to keep oneself in office is perhaps the most abusive and destructive violation of one’s oath of office that I can imagine.

In the last several weeks, I have received numerous calls and texts. Many demand that, in their words, “I stand with the team.” I can assure you that that thought has been very much on my mind. I support a great deal of what the president has done. I have voted with him 80 percent of the time. But my promise before God to apply impartial justice required that I put my personal feelings and biases aside. Were I to ignore the evidence that has been presented, and disregard what I believe my oath and the Constitution demands of me for the sake of a partisan end, it would, I fear, expose my character to history’s rebuke and the censure of my own conscience.

I am aware that there are people in my party and in my state who will strenuously disapprove of my decision, and in some quarters, I will be vehemently denounced. I am sure to hear abuse from the president and his supporters.Does anyone seriously believe I would consent to these consequences other than from an inescapable conviction that my oath before God demanded it of me?

I sought to hear testimony from John Bolton not only because I believed he could add context to the charges, but also because I hoped that what he said might raise reasonable doubt and thus remove from me the awful obligation to vote for impeachment.

Like each member of this deliberative body, I love our country. I believe that our Constitution was inspired by Providence. I am convinced that freedom itself is dependent on the strength and vitality of our national character. As it is with each senator, my vote is an act of conviction. We have come to different conclusions, fellow senators, but I trust we have all followed the dictates of our conscience.

I acknowledge that my verdict will not remove the president from office. The results of this Senate court will in fact be appealed to a higher court: the judgment of the American people. Voters will make the final decision, just as the president’s lawyers have implored. My vote will likely be in the minority in the Senate. But irrespective of these things, with my vote, I will tell my children and their children that I did my duty to the best of my ability, believing that my country expected it of me. I will only be one name among many, no more or less, to future generations of Americans who look at the record of this trial. They will note merely that I was among the senators who determined that what the president did was wrong, grievously wrong.

We’re all footnotes at best in the annals of history. But in the most powerful nation on earth, the nation conceived in liberty and justice, that is distinction enough for any citizen.

I wish I had seen him speak it live. Within hours he was accused of what amounts to be treason on Twitter by the President, as well as the President’s son Donny Junior, who called for Romney, whose personal and family credentials as Republicans far outweigh the Trump family claims as Republicans to be the purveyors of Republican fidelity. However, as illogical as that sounds, the Trumps do represent  what the GOP has become, a cesspool of creatures indebted to propagandists like Rush Limbaugh and Sean Hannity, the Christian preachers who sold out every last vestige of their faith to publicly lie for the President, and even anti-government right wing militias, mostly made up of White Supremacists.

I would not be surprised if anyone who has publicly opposed Trump, or tried to obey their oath of office will become targets of violence as a now unencumbered President takes revenge on them. I would hope to be wrong about that, but everything points to the United States becoming an authoritarian nation cloaked in a facade of supposedly free elections, just like Russia, Turkey, and so many others. Be assured that the Evangelical leaders of Trump’s will certainly condemn him for being a Mormon and therefore in no way a Christian. Of course the punishment for heresy is often death, or ostracization from the community, and in this case it is not the Church, but Trump’s Republican Party.

I am going to leave it there for the night. I want nothing but the best for our country and its citizens, but I fear that we are on the brink of the abyss. The President will speak today about his impeachment and acquittal. What he says, and what his confederates in the Congress, Administration, media, and pulpit say and do will determine that.

I will not talk about the General Election, but it is clear that as in 2016 Trump and his minions will do all they can, even break the law and work with enemy powers to win.

6 responses to “One Republican Senator of Moral Courage and Clarity: Mitt Romney and Impeachment”