Today I remember the service of Vice Admiral Samuel Gravely, a pioneer in the desegregation of the Navy and one of the first Black Naval Officers, not to mention the first to achieve Flag Rank. He was a man who, like Jackie Robinson in Baseball, knew how much was riding on his shoulders. For him failure did not reflect just on him, but on every Black man, and later woman who desired to become a Naval Officer.

Free Blacks had served in the Navy since the American Revolution and were not segregated as they later were in the Army. While none could become officers, they served in nearly every enlisted rating, alongside whites, until President Woodrow Wilson, ordered the Navy to only employ Blacks as mess stewards in 1915. Wilson, the first American President to come from a Southern State since the Civil war also greatly restricted opportunities for Blacks in the Civil Service and hosted a screening of D.W. Griffith’s monumental film commemorating White Supremacy, the Lost Cause, and the Noble South, Birth of a Nation. With the rollbacks in opportunities for Blacks in the Navy, their numbers in service dwindled, and then the Second World War broke out, and the debate regarding the integration of the military began anew, but nowhere was the resistance to Blacks serving, was in the Navy, despite the heroism of men like Dorie Miller who manned a machine gun on the USS West Virginia and attempted to save the life of his mortally wounded Captain, actions for which he was awarded the Navy Cross, which was after long delay upgraded to the Medal of Honor

“I was sure that I could not afford to fail. I thought that would affect other members of my race if I failed anywhere along the line. I was always conscious of that, particularly in midshipman school and any other schools I went to…I tried to set a record of perfect conduct ashore and at sea.”

Things have changed much since 1942 when following the attack on Pearl Harbor a young black college student from Richmond Virginia enlisted in the Navy. Samuel Gravely Jr. was the son of a postal worker and Pullman porter while his mother worked as a domestic servant for white families in Richmond. His mother died unexpectedly when he was 15 in 1937 and he remained to help care for his siblings as his father continued to work. Balancing the care of his family with his education he enrolled in Virginia Union College, a Baptist school in Richmond.

It is hard to imagine for most of us now to comprehend the world that the young Gravely grew up in. Segregation was the norm. Blacks in the south and many other locations faced personal as well as intrenched institutional racism. Violence against blacks was quite common and the Ku Klux Klan was strong.

The military was still segregated and a great gulf existed between white military personnel and blacks. Though the selective service law of 1940 called for the conscription of people regardless of race, creed or color the services enjoyed much latitude in determining how minorities could serve. The Secretary of the Navy at the time, Frank Knox resisted integration. Knox determined that African Americans would remain segregated and serve only as Mess Stewards to “prevent undermining and disruptive conditions in the Navy.” Knox told President Roosevelt in the presence of black leaders that “because men live in such intimacy aboard ship that we simply can’t enlist Negroes above the rank of messman.”

That sentiment to maintain the status quo of segregation was especially strong in both the Navy and the Marine Corps. The leaders of both services resisted attempts to broaden the ability for African Americans to serve and urged that blacks serve in the Army, not the Naval Service.  Marine Corps Commandant Major General Thomas Holcomb agreed with this stance. He commented:

“If we are defeated we must not close our eyes to the fact that once in they [Negroes] will be strengthened in their effort to force themselves into every activity we have. If they are not satisfied to be messmen, they will not be satisfied to go into the constriction or labor battalions. Don’t forget the colleges are turning out a large number of well educated Negroes. I don’t know how long we will be able to keep them out of the V-7 class. I think not very long.”

But President Franklin Roosevelt was not deterred and by April 1942 changes were announced to allow African Americans to serve in other capacities. Even so, the African Americans selected for ratings other than messman were to be segregated and commanded by White Officers and Petty Officers.

The USS PC-1264 and its crew, Gravely is the lone black officer

Gravely enlisted in the Navy under these conditions. Serving as a Fireman Apprentice after receiving training as a Motor Machinist in San Diego, he worked in menial jobs. In 1943 Gravely was one of only three sailors in his unit to be selected for the V-12 officer training program. He was the only black to make the cut. He was commissioned as an Ensign on December 14th 1944 and assigned to train black recruits at Great Lakes despite the fact that the vast majority of his class went to sea. This was mainly due to the policy set forth by the General Board in 1942 that prescribed:

Despite this by 1945 the Navy was beginning to change. Gravely was chosen to serve on one of two ships assigned to the “experiment” of seeing how blacks in general ratings could serve at sea. The USS Mason (DE 539) and the USS PC-1264 were assigned black crews with majority white officers, except that Gravely was assigned to PC-1264. Though his commander was pleased with his service Gravely, who had been denied admittance to Officer Clubs and many other “white only” facilities resigned from the Navy in 1946. He believed that the inherent discrimination of the Navy left him no place for advancement. He returned to complete his bachelors degree at Virginia Union.

In 1949, following President Truman’s integration of the military Gravely was asked by the Navy to return to active duty. But the end of the old order was foreshadowed by a Navy pamphlet published in 1944 entitled The Guide to the Command of Negro Personnel. That publication included the statement that ”The Navy accepts no theories of racial differences in inborn ability, but expects that every man wearing its uniform be trained and used in accordance with his maximum individual capacity determined on the basis of individual performance.” 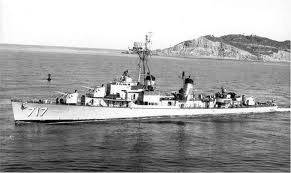 Gravely accepted the offer to return to active duty and never looked back. He worked hard for respect and used his natural talents, personality and size to command respect. He was a man who would blaze the way for other African Americans, and later women and most recently gays to go on to greater things. Gravely would go on to command three ships. He was the first African American Naval Officer to command a Navy warship, the USS Theodore E Chandler (DD 717), the first to command a Navy ship in combat, the USS Taussig (DD 746) and the first to command a major warship, the USS Jouett (CG 29). Promoted to flag rank he eventually became the first Black to command a Fleet when he took command of 3rd Fleet. He retired in 1980 and passed away in 2004.

Commander Gravely and his officers on USS Taussig

Gravely gave his parents and conditions of his upbringing much credit for his success. He believed that those conditions which forced him to “capitalize on his strong points, build his weak areas and sustain the positive self-esteem and self-worth that his parents instilled in him as a young child.”

He was a great leader. LCDR Desiree Linson who interviewed him for her Air Command and Staff College project noted that Gravely like many other great military leaders before him learned to manage the image that he presented, be a caretaker for his people, what we would now call a mentor. He said “[If I was CNO] my responsibility would be to make sure enlisted men and families were taken care of. I would do everything in my power to make sure.”

His pursuit of excellence, self confidence and mastery of professional skills empowered him in an institution where he was still an anomaly and where racism still existed. He believed in effective communication, especially verbal communication and in building teams and in being a good follower, listening, learning and proactively anticipating the needs of his superiors. Gravely was also a believer in personal morality and self discipline and preparedness. He said: 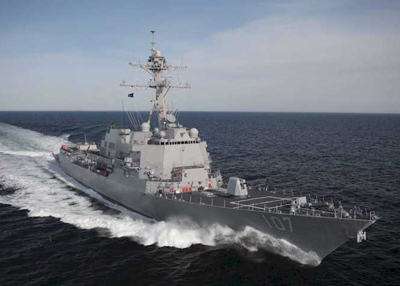 Vice Admiral Gravely blazed a trail for those that followed him and set an example for all Naval Officers to follow. He did it under conditions that most of us could not imagine. I am proud to serve in the Navy that he helped to make.  His vision, service and memory are carried on in this navy and in the ship that bears his name, the USS Gravely DDG-107.