A New Thread in the Tapestry of My Life: Serving People in the Age of COVID-19

It is interesting to think about life, what has transpired, and what might have been if only…

Like anyone I wonder about all of the “what ifs” and “might have been” parts of my life. Of course there are many, going back to things that I could not control, such as the choices that my parents made regarding their lives, career, family, and home. Then there are my own choices, choices that I made, some for better, and some maybe for worse. Then there were the choices of men and women in my life and career that impacted my life and the decisions that I made, again for better or worse.

If only my knees hadn’t been too badly injured and slow to recover I would have been out of the Navy, probably teaching history (now online) at the college level while relegating my calling as a priest to the background. But after that I  couldn’t retire, but due to a administrative error in calculating my statutory retirement date as I expected in April. I am now scheduled to retire in August, but with Coronavirus there is even uncertainty about that, and frankly I couldn’t care less, because I would rather serve and be in the thick of the fight than sitting on my ass or doing something that provides for me and Judy, but does not help in the time of crisis.

Between last spring when I first put in my voluntary retirement  paperwork working in the most miserable tour of all my time in the military, and doubting my call as a Priest, something miraculous happened. The screwed up knees and administrative mistakes ended up renewing my call and ministry among people I would never have expected to be serving. But even with that I never expected that I would still be serving on active duty at the age of 60, providing needed and valued ministry to people of all faiths, including atheists, in the midst of the novel Coronavirus 19 pandemic that is infecting some of them, or infecting and killing their family members, friends, or others that they know. Of course I take all of the guidance seriously to protect those I serve as well as Judy and me, but a new thread has been woven into the tapestry of my life. I felt the renewed call not long after I arrived, but this has solidified it.

I love the television series Star Trek the Next Generation. One of my favorite episodes is called Tapestry. In the episode Captain Picard is killed. He is then met by the being known as Q, played by John De Lancie for a do-over, a second chance to reverse a choice that he made as a young officer.

On Q’s promise that his choice will not alter history Picard takes the chance and he ends up regretting it. In his second chance to avoid the incident that allowed him to be killed he alienates himself from his friends, and turns him in to a different person, unwilling to take chances and doomed to insignificance. When he returns to his new present he finds himself alive but a different person. Instead of a starship captain is a nondescript lieutenant junior grade doing a job that he hates as an assistant astrophysics officer. 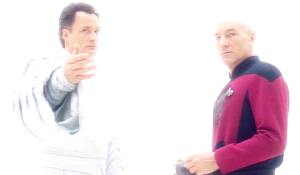 Picard: You having a good laugh now, Q? Does it amuse you to think of me living out the rest of my life as a dreary man in a tedious job?

Q: I gave you something most mortals never experience: a second chance at life. And now all you can do is complain?

Picard: I can’t live out my days as that person. That man is bereft of passion… and imagination! That is not who I am!

Q: Au contraire. He’s the person you wanted to be: one who was less arrogant and undisciplined in his youth, one who was less like me… The Jean-Luc Picard you wanted to be, the one who did not fight the Nausicaan, had quite a different career from the one you remember. That Picard never had a brush with death, never came face to face with his own mortality, never realized how fragile life is or how important each moment must be. So his life never came into focus. He drifted through much of his career, with no plan or agenda, going from one assignment to the next, never seizing the opportunities that presented themselves. He never led the away team on Milika III to save the Ambassador; or take charge of the Stargazer’s bridge when its captain was killed. And no one ever offered him a command. He learned to play it safe – and he never, ever, got noticed by anyone.

It is a fascinating exchange and one that when I wonder about the choices that I have made that I think about; because when all is said and done, my life, like all of ours is a tapestry. On reflection Picard tells Counselor Troi, “There are many parts of my youth that I’m not proud of. There were… loose threads – untidy parts of me that I would like to remove. But when I… pulled on one of those threads – it’d unravel the tapestry of my life.”

I think that I can agree with that. All the things in my life, the good things and the bad, as well as the paths not taken have all been a part of the tapestry of my life. I would not be who I am without them; and that I cannot comprehend. I would rather be the flawed me that is me, than the perfect me that never existed. Thus, all of those threads of my tapestry are in a sense, precious and even holy.

I’ll keep all of them, but of all I will remember this thread, as well as my combat tours, and life and death in ICUs and ERs the most. Suddenly at the age of 60 life has begun again. As the late great Sid Caesar once said:

“A great NOW will be a great WAS! A bad NOW will always be a bad WAS, and all you can hope for is a Great GONNA BE!”

As old as I am and as long as I have served, my future is yet to be written, and the tapestry of my life continues, even as new threads are woven into it. Every experience in my life has helped make me the person that I am. A friend of mine from my high school years sent me an email after I explained the experiences behind my writings, and noted “maybe all of that prepared you for such a time as this.” It was an affirmation by someone who doesn’t always share my political, social, or interpretation of the Christian faith that I am doing what I need to be, in such a time as this.

Value the tapestry of your life, and always find something good to life for and work towards.

One response to “A New Thread in the Tapestry of My Life: Serving People in the Age of COVID-19”