The Film that Shocked the World: Nazi Concentration Camps From Nuremberg 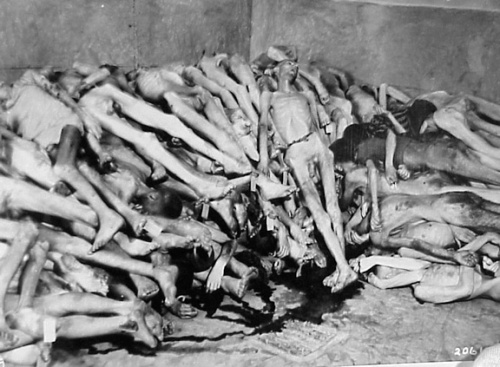 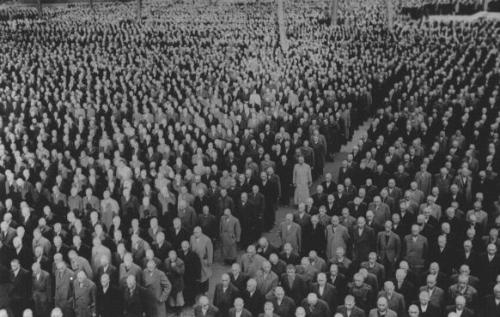 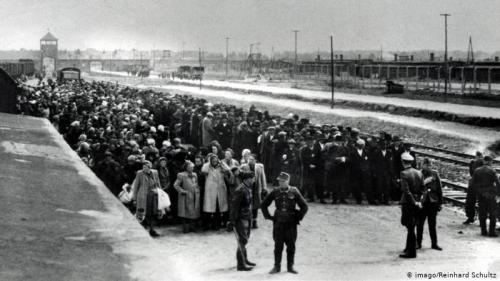 Instead of writing much tonight I am posting a video compiled by American and British personnel as they liberated Nazi Concentration Camps in Germany. The images even though shot in black and white are still nearly 75 years after it was shown in the Nuremberg Palace of Justice on 29 November 1945, just a week into the trial the Allied Prosecutors led by Associate U.S. Supreme Court Justice, Robert H. Jackson introduced it into evidence.

The UPI report of the day’s testimony and the film described the scene:

NUREMBERG, Nov. 29, 1945 (UP) – A tense audience at the war crimes trial watched for 52 horror-packed minutes today a 6,000-foot American Army film baring conditions at Nazi concentration camps. The prosecution charged that the camps were an instrument of policy of German leaders, including the 20 men on trial in the courtroom, in their drive for power.

In an almost deathlike silence the defendants, silhouetted in the dark courtroom by fluorescent lamps so that their guards could watch them, stared fascinated, bowed their heads low or mopped their faces as the show proceeded.

One, Hjalmar Schacht, kept his back turned throughout. Another, Polish Overlord Hans Frank, one of the most infamous mass murderers in world history, got sick.

High spots included a telephone talk in which Goering dictated to Seyss-Inquart a request which Seyss-Inquart was to make that German troops be sent into Austria; a telephone talk in which Adolf Hitler said he would “never, never forget” Benito Mussolini for co-operating and a 41-minute call by Goering to former Foreign Minister Joachim von Ribbentrop, then Ambassador in London, describing how “the birds are twittering here” in Berchtesgaden the day after the German invasion.

Court recessed at 3:15 so the movie screen could be made ready. At 3:35 the lights suddenly went out. At the same instant lights set around the prisoners’ dock rail flashed on to light the defendants. Reinforcements of American M.P.’s filed silently into the room to join the white-helmeted guards around the dock.

“We will now show what concentration camps mean,” he said. “… the camps were not an end in themselves but an integral part of the Nazi system of government. We intend to prove that each defendant knew of the camps and that the camps were instruments by which the defendants retained power. They used the camps to prepare aggressive war.”

First came Leipzig – shots of bodies, burned to a crisp, of men and women who had tried to flee barracks the Nazis set afire and were mowed down by machine-gun fire.

Goering leaned forward in his seat, staring. Rudolf Hess snapped upright, betraying intelligent interest for the first time since the trial started, and whispered to Goering on his right and Ribbentrop on his left.

The camera eye moved slowly over the heaps of burned bodies. War correspondents had seen them before they were piled up – fingers dug into the earth in agony.

The film flashed to Hamadar, which the Germans called the shudder house.

Papen lowered his head and covered his face with a handkerchief.

The film went on to Northausen, which the American 3rd Armored and 104th Infantry divisions liberated. It showed 2,500 bodies stacked beside a bombed building.

Schacht, his owl-like glasses reflecting the light in the prisoners’ dock, remained rigidly facing the audience, turned away from the screen.

German civilians, carrying bodies to mass graves under the guns of American troops, passed on the screen.

Grand-Adm. Karl Doenitz leaned heavily over the side of the dock as if he had taken all he could. Keitel took off his glasses, mopped his sweating face and lowered his head.

Next came Buchenwald, one of the worst of all. The film showed German civilians marching past a display of lamp shades, picture frames, plaques and bookmarks made of the skin of murdered men. The wife of the S.S. camp commandant had selected the victims.

Hess still watched, intensified. Julius Streicher stared with a deadpan face. Ribbentrop still had his eyes to the floor.

Then came Mauthausen, notorious Dachau, one of the earliest, greatest and most dreadful, and Belsen, where bodies were piled so high British bulldozers had to push them int o mass graves.

The film ended and the lights went on. For long moments the entire audience sat as if transfixed. Goering did not move his eyes from the screen until court adjourned one minute later. Schacht stood up and his lawyer said that he had nothing to do with the camps – in fact, would tell the court that he spent seven months at Dachau himself.

The film is real, and there was much more like it; in fact the Soviets would show a film from the death camps they liberated just two months later. But for now I will leave you with the film that shocked the world, and forever turned the tide against the Nazi Major War Criminals.

Please don’t believe that such events could happen in any country in the World, including Trump’s America. Please watch all of it, even if it sickens you as it should. Please don’t believe anything Trump says regarding race, ethnicity, religion, political opponents, the free press, and his deliberate falsification or anything that might embarrass him, because in each case he is telling his alternate version of the truth which acquits him and blames his victims.
As of today he has been responsible for decisions that have claimed the lives of over 160,000 American and infected over Five million Americans with the Coronavirus 19 virus and a pandemic that has made a nation with just 4.25% of the Worlds population, which supposedly had the best in medical, scientific and research programs to stop pandemics to the worst for a nation supposedly so well educated, prepared, and ready for a pandemic.

But instead of a President dedicated to telling the truth, backing the facts of science and medicine, we have a man who only speaks for himself and those who will not turn on him. 162,000 dead, and over Five Million infected Americans testify against him

Yet, unlike the President I will tell the truth because I am bound by my oath to the Constitution, and my vows as a priest.

With that I leave you for tonight. I do need get some sleep.

I report, you decide.