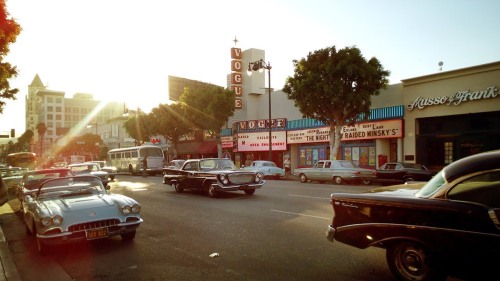 In order to shield myself from as much Election Eve I watched the film Once Upon a Time in Hollywood, written, produced and directed by Quentin Tarantino. I have always admired Tarantino’s film making magic and ability to tell a story using period pieces and weaving fantasy into it, and then blend stories within stories, often using a lot of violence, blood and gore. But this was something different from those. It was a love letter to Los Angeles of that era. It was a look into a past I remembered as a kid, 1969 Los Angeles, Southern California, and in large part California in the late 1960s to early 1970s. The culmination of the film dealt with the Manson Family and a fictional ending of that very real and horrifying crime.

Tarantino used the film to portray a year in Hollywood which was pivotal in the transition of the old Hollywood to the Hollywood of today. It was also a year that was part of an era where the country began to change. Growing up on the West Coast, but mostly in Southern and Central California from 1968-1974 I saw that change from the perspective of an eight to fourteen year old. Even when we lived in Oak Harbor, Washington, we made frequent trips to Napa and Stockton California between 1966-1968 before my dad was transferred to Long Beach in the Fall of 1969. The film took me back to that time, the television shows, commercials, films, clothing styles, music, cars, and even the buildings, theaters, fast food restaurants were perfect. As we watched the special features on the Blu Ray disc we talked a lot about things that went on then.

We talked about that era, beginning with the Manson Family killing spree and what a relief it was to both of us it was when he died in prison. We also reminisced about the other things going on in California around that time period, and how each one was terrifying to children and adults. Of course there was Manson and his trial. Then there was the Zodiac Killer, the Golden State Killer and the Symbionese Liberation Army and the kidnapping of Patty Hearst. A lot of these groups were covered by national as well as local television and radio stations.

But then there were the thoughts about cars, restaurants, television shows, and movies; the clothing of the period, and other memories, good and bad.

I found the film amazing because of how well it depicted the period, and I liked the ending far more than what happened in real life with the Manson Family. Sometimes the fantasy ending is better than real life. It may be something that we have to hold onto over the next two and a half months.

Hoping and praying for Peace,

P.S. The saga of the toothache is over. This morning Judy dropped me off at the Navy Dental Clinic where I was treated very well. I am not going to go into detail about it, but the tooth was cracked, the nerve abscessed, and sometime died making the tooth necrotic. It was removed, I was given more pain meds and a stronger antibiotic. I need to contact the Clinic for other questions on follow-up because I did not ask the questions before Judy picked me up. The pain level has gone down, the swelling too. Thank you for your kind words thoughts and prayers.