I am pretty much tolerant of people’s beliefs and practices but I find that there are a decent number of people especially conservative religious people that are not very tolerant of mine. On the other hand there are some people that I have lost all tolerance for, American Nazis, Neo-Nazis and White Supremacists are number one on the list.

My first encounter with the Neo-Nazis was in college when they and other Holocaust deniers went about spouting their poison. Then in 2000 when serving with a Marine Battalion a racial incident occurred involving a group of white Marines tattooing another with Nazi symbols. I had to research the Neo-Nazi and White Supremacist world as I was in charge of conducting briefings regarding the incident and I worked with one Marine who led the assault who recanted his views at his court martial when he saw the depth of the hatred of the Nazi leaders he was following.

If there is a literal hell I think that Nazis and their sympathizers have s special place in it.   Yesterday I took some incoming on this site from an East Tennessee Neo-Nazi who attempted to terrorize me a couple of years ago. Then he was menacing enough and specific enough in his threats via e-mail that I turned the information over to the FBI and the Southern Poverty Law Center investigators.

This time I refused to approve the vile comments of this man and consigned them to the trash but they got to me and I am still a bit stirred up because I never did anything to this guy, and from his web history I see that he does this to others as well. He has a presence on a number of neo-Nazi, white supremacist and militia movement websites and claims to be a former “paratroop officer.” He goes by several internet monikers but all have the same or similar IP addresses and physical locations.

To quote Patton “Nazis are the enemy.” There is nothing redeeming in the Nazi message or similar messages of American Neo-Nazis, White Supremacists, Skinheads and those like them. And sadly these American Nazi bozos don’t even have the cool uniforms of the German Nazis, at least the actual Hitlerites got style points for cool uniforms.  I wish our Nazis wore their uniforms in public so we could see them in all of their thuggish buffoonery, especially their leaders, those same men that try to ingratiate themselves into the political mainstream and wear nice suits and ties. Since they try to blend in there are times I wish there was a real life Lt Aldo Raine out there giving them an insignia that they cannot remove. 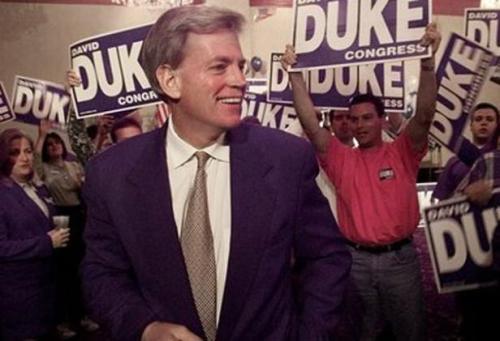 The numbers of these American Nazis are comparatively small, but growing and becoming both more violent as well as trying to worm their way by stealth into the fabric of the conservative movement, the Republican Party and some local Democrat party levels if they find an opening to run.  In the latter case a neo-Nazi did exactly that to win a Democrat race in East Tennessee because no one else was running. Last month the Neo-Nazi group Stormfront hosted a nationwide conference in the area of Sevierville Tennessee, the same place as my Nazi nemesis has his internet IP address. Heck they even had former KKK Grand Wizard and GOP Congressional Candidate from Louisiana David Duke do a nature walk with them in the Great Smokey Mountain National Park.

Naziism and its ideological cousins are a poisonous evil that thrives when its leaders can prey on the fears of people in difficult times. Now I don’t think that we are in danger of any kind of Nazi takeover but they are dangerous. Just ask the victims of the neo-Nazi at the Sikh temple in Wisconsin.

I will be tolerant of people but I will not be bullied by Nazi thugs nor will I be silent when I see them endangering others or threatening me.