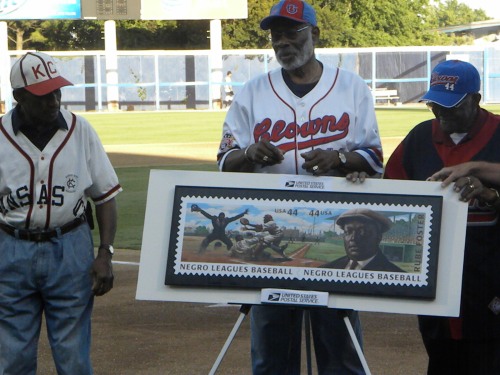 It was another beautiful night for a ball game at the Church of Baseball Harbor Park Parish as 8483 fans gathered to see th3e Charlotte Knights take on the Norfolk Tides.  It was a special night as the Tides honored the Negro Leagues with the unveiling of the new US Postal Service Commemorative Negro League stamp set and with each team wearing replica Negro League uniforms representing the great teams that played in the historic leagues which did so much to help the cause of racial equality in the United States. On hand were Hampton Roads natives and former Negro League players including the great Sam Allen as well as Thomas Burt, Levi “Champie” Drew and Chester Moody. The stamp set which is two 44 cent stamps that when together honor the league as well as Andrew “Rube Foster the founder of the Negro National League and black baseball’s most influential personality who organized the first professional league in Negro Baseball. In 1920 Foster the owner of the Chicago American Giants decided that the time had arrived for a truly organized and stable Negro league. With Foster at the helm the Negro National League was born in Kansas City in 1920.  The league fielded eight teams many of which remain etched in the minds of modern baseball fans and which pioneered professional baseball and which provided the set for future hall of famers and Negro league greats to achieve national prominence and for some to break the racial barriers of Major League Baseball. The teams, the  Chicago American Giants, Chicago Giants, Cuban Stars, Dayton Marcos, Detroit Stars, Indianapolis ABCs, Kansas City Monarchs and St. Louis Giants survived the end of the first Negro National League in 1931 and remain part of the American baseball scene.

The game as I said was a pitcher’s duel and hitting on both sides took second place to solid pitching by the starters and the relievers. The Knights scored their two runs in the first inning on a walk, two singles and a sacrifice fly.  The Tides had chances to score during the game. They left Matt Angle at third base with no outs in the bottom of the first and Paco Figueroa died at home when trying to score on a one out ground ball by Robert Andino and Andino was left stranded second and Jeff Salazar at first when Michael Aubrey flied out. In the 9th both Nolan Reimold and Rhyne Hughes hit deep fly balls that died at the warning track both of which appeared would go out of the park before the wind knocked them down.  In the 7th inning the Tides got their one run when Rhyne Hughes doubled and was driven home by a Blake Davis single.

Paco Figueroa is tagged out at home in the 8th inning

Charlotte starter Jeff Marquez (7-4 4.02 ERA) went 7 innings allowing 4 hits and 1 run striking out 4 and waling 1 in picking up the win while Greg Aquino picked up his 9th save despite giving the Knights a scare with the two deep fly balls in the 9th.  Tides starter Zack Clark (0-3 3.06 ERA) picked up the loss but had an impressive performance as did relievers Mike Hinckley, Cla Meredith and Jim Miller. Miller was particularly impressive in the 9th sending the Knights down in order striking out two.

The Knights had 2 runs on 6 hits and committed two errors leaving 7 men on base.  The Tides 1 run on 5 hits with no errors stranding six runners.  Tonight the teams wrap up this part of their series before taking it back to Charlotte with Matt Zeleski (5-5 3.46 ERA) of the Knights going up against Tim Bascom (2-2 4.37 ERA) a game that will feature post-game fireworks in honor of the founding of the United States.