Infantry Tactics at the Beginning of the American Civil War

Today another revised section of one of my Civil War texts.

The heart of the Civil War armies was the infantry, of which the key unit was the infantry regiment. The U.S. Army had ten Regular Army infantry regiments that the outbreak of the war, most of which were scattered about the country in small garrisons especially in the west, where they were engaged in providing security in the newly acquired territories and states. The few Regular Army units of the United States Army were expanded during the war, and more importantly were joined by hundreds of volunteer regiments during the war.

The Confederacy, lacking a regular army also raised hundreds of volunteer infantry regiments.  The regiment was built around the infantry company that was composed of sixty to one hundred soldiers commanded by a Captain. Most companies, in the case of the volunteer regiments came from the same town, county or neighborhood. The infantry regiment was composed of ten companies. Union infantry regiments “maximum strength was fixed at 39 officers and 986 men. A Confederate regiment was larger: 49 officers and 1,340 men maximum.”  [1] However, in practice these guidelines were not rigidly adhered to, depending on recruiting efforts some regiments have fewer men than their authorized strength when organized and others from more populous areas had more.

However, most regiments were rarely at their authorized strength after their muster into service and this got far worse for units after they had been on campaign and in battle. Federal statistics show that, “by April 1862, an average regiment had 560 men; by July 1863, it would number only 375 soldiers.” [2] These were average numbers, at Gettysburg, some regiments like the 8th Ohio Volunteer Infantry, which on July 3rd decimated the men of John Brockenbrough and Joseph Davis’s brigades on the left flank during Pickett’s Charge had just 209 men in its the ranks. The 124th New York Volunteer Infantry had just 18 officers and 220 men in its ranks when Hood’s brigades of Texans, Georgians and Arkansas men hit them at Devil’s Den on July 2nd 1863 at Gettysburg. [3]

Prior to the war regiments tended to be scarred about the nation in small garrisons or on the frontier, and the brigade was the largest unit within the army, and then only put together for combat or expeditionary operations. A brigade was typically composed of two to five regiments. In theory brigades were commanded by Brigadier Generals but many times commanded by Colonels. In addition to their organic infantry brigades usually had their “own quartermaster, commissary, and ammunition trains. Medical teams and sometimes artillery, were assigned to brigades.” [4] With the attachments the brigade could function as an independent unit.

Infantry formations on both sides relied on Napoleonic infantry tactics which when they were formulated worked well due to the types of weapons used by opposing armies. Depending on the tactical situation, infantry regiments, brigades and divisions advanced into battle in either column formation or line shoulder to shoulder.

The column formation, a tactic borrowed from the French, but also used by other armies was used to move quickly into battle. It involved “massing troops on a narrow front, like a swinging a ram, could smash into, and disrupt, an enemy infantry formation and make it run for its life.” [5] During the Napoleonic Era the French often used to charge in the offense as it could provide weight of numbers at the point of attack. The drawback to this formation was that the attacking units were extremely vulnerable to enemy artillery fire, particularly Solid Shot cannonballs “which could do hideous damage to a tightly packed column with just a few well-placed rounds” [6] if the enemy artillery was not sufficiently disrupted or destroyed before they came into range.

Columns could be formed from battalion level up. At Waterloo Napoleon deployed a Corps in column, to gain a better understanding it is best to look at the battalion or regiment in column. Typically a column would be one to two companies wide making a front of 30 to 60 soldiers. Thus a full strength regiment deployed in a two company front column would have about 17 ranks.

The line formation was adopted from the British although the French and Prussians used it as well. The line formation was designed to maximize the fire of regiments by placing the men in a formation of “two or three lines which allowed the full play of musket fire along its front.” [7] Since the rate of fire of muzzle loading muskets, rifled or not was much slower in battle conditions, the tactic enabled infantry regiments to maintain a good volume of fire against enemy units, in the offense or in the defense. However the line was an “extremely fragile formation. Attempting to march a line forward across anything except the smoothest parade ground led to disorder. Men straggled, stumbled, wavered, and the line would soon lose all cohesion.” [8] Confederate General D.H. Hill “later in life once asked, rhetorically but memorably: ‘Whoever saw a Confederate line advancing that was not crooked as a ram’s horn? Each ragged rebel yelling on his own hook and aligning on himself.’” [9]

The great virtue of the line formation was “its ability to deliver musket fire by volley and its relative immunity to artillery fire,” [10] at least fire delivered from the front as it presented a small target. However if enemy artillery was able to get in position to deliver enfilade fire, or fire from the flank as happened to the Confederate troops who made Pickett’s Charge, the effect could be devastating.  Unlike the column formation, the line formation took a great deal of time to deploy in line of battle and to maneuver swiftly as a unit once formed and it was vulnerable to cavalry if caught in the open.

The first American infantry drill manual was issued in 1779 when General Von Steuben was given the task of training the Continental Army. The books was based on the tactics of the Prussian Army under Frederick the Great. However, over time, Americans came to favor French drill manuals. In 1835 General Winfield Scott translated the revised French drill manual and issued it as Infantry Tactics and Rules for the Exercise and Manoeuvers of the United States Infantry. The Army that Scott led into Mexico in 1846 used the manual with success and it remained in publican until 1861, and “its general structure remained the heart of all the civil War drill manuals.” [11] As tacticians began to appreciate the impact of the rifled musket infantry tactics saw some adjustments in order to “increase the speed and mobility of tactical movement.” [12]

Scott’s manual was superseded by the volume produced by William J. Hardee who later became a Confederate general. Hardee’s work, Rifle and Light Infantry Tactics for the Exercise of Manoeuvers of Troops when acting as Light Infantry or Riflemen was “based directly on a new generation of French manuals.” [13] Hardee modified the line formation from three lines to two and had an increased role for skirmishers. Likewise Hardee added “extra provisions for rifle fire and manoeuvers at a gymnastic pace (‘double quick’) of 165 to 180 steps a minute.” [14] While an improvement on the older manuals it was still very similar to Scott’s work. 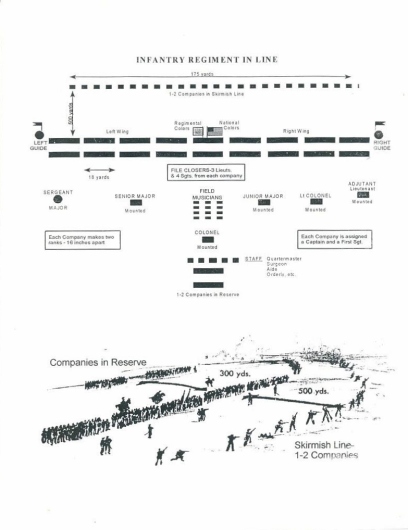 In 1862 the U.S. Army adopted Silas Casey’s manual, Infantry Tactics as its official doctrine. Casey’s work was for the most part a composite of Scott’s and Hardee’s work. That being said, Casey “also contributed tactical doctrine for brigade and larger-unit tactics and made revisions that improved the deployment from column to line.” These contributions were important to both armies as the “Confederates quickly followed the Union army in adapting his revisions.” [15] While Casey’s became the official doctrine it was Hardee’s that “won the widest usage and was issued in the most variants.” [16] These included adaptations for U.S. Colored Troop regiments as well as militia forces.

Casey’s manual was particularly helpful for officers serving as brigade and regimental commanders. Previous manuals had been unclear as to where they should place themselves in the order of march, or when the unit was moving in line or column on the attack. Casey clarified this so that “Budding commanders could easily work out where they should place themselves as their regiments marched to the front in column or line, how brigade artillery should be employed, how the head of a column should be maneuvered to give direction to the main mass, and so on.” [17] Even so new officers who had crammed their heads with Scott, Hardee, or Casey for a few weeks could cause havoc among his own troops. A soldier of the 14th New Hampshire Infantry noted: “The men were serene in their ignorance of tactics; but ambitious officers of the line, who had been cramming Casey for a fortnight, were in a vertebral, cold-shiver temperature…. That the men got caught in a snarl, a tangle, a double twisted, inextricable tactical knot, is tame delineation. The drill caused a great deal of serious reflection…” [18]

As the war went on more use was made of skirmishers, which traditionally had deployed in front of the line. With the rifled muskets the skirmishers, advancing ahead of the massed formations could use the longer range and greater accuracy of their weapons to inflict significant numbers of casualties on the enemy, and to pick off enemy officers and artillerymen. The artillery despised the skirmishers as they could do little to combat them without having their own close infantry support.

But skirmishers took a long time to train and the massed volunteer armies, mostly officered  by volunteers had precious little time or experience to train good skirmishers. The Union attempted to rectify this by organizing Sharpshooter regiments, “two of which were organized for the army of the Potomac by Hiram Berdan in 1862.” [19] Both of these units served well at Malvern Hill in 1862 and Gettysburg on July 2nd and proved their worth on other battlefields of the war.  Highly trained and motivated Berdan’s sharpshooters “lived like a band of brothers, imbued with the one feeling of patriotism in their voluntary enlistment for three years.” [20]

[3] For a listing of the numbers of soldiers that each regiment went into battle with at Gettysburg see Petruzzi, J. David and Stanley, Steven The Gettysburg Campaign in Numbers and Losses: Synopses, Orders of Battle, Strengths, Casualties and Maps, June 9 – July 1, 1863 Savas Beatie LLC, El Dorado Hills CA 2012

[12] Ibid. Hagerman The American Civil War and the Origins of Modern Warfare p.20

[15] Ibid. Hagerman The American Civil War and the Origins of Modern Warfare p.20