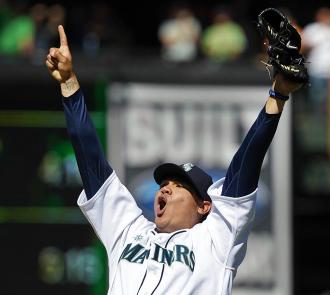 “I don’t have any words to explain this…I’ve been working so hard to throw one and today is for you guys.” Felix Hernandez

Felix Hernandez is beloved by the fans of the mostly hapless Seattle Mariners. The Mariners have fallen on hard times since the days when Randy Johnson led them to the World Series.

Hernandez pitched the third perfect game of the 2012 Season, a record number of perfect games in a season. He joins Giant’s All-Star Matt Cain and Philip Humber of the White Sox. The record had been two perfect games set in 2010, a record which would have been merely tied had umpire Jim Joyce made a bad call that cost Armando Galarraga a perfect game on June 2nd 2010.

This is also the sixth no-hitter of the season approaching the record of seven recorded in 1990.  If there is such a thing as the year of the pitcher, or a pitching era we are now in it. The era of steroid enhanced hitting is definitely over.

In today’s game against a Tampa Bay Rays team that had won 8 of their last 10 games before facing King Felix. However the Rays are no strangers to being victimized by perfect pitchers. This is the third time in the past four years that the hard hitting Rays have been shut down, the previous times against Mark Buerhle of the Tigers on July 23rd 2009 and Dallas Braden of the Oakland Athletics on May 9th 2010.

Today Hernandez threw 113 pitches, 77 for strikes, striking out 12 batters and striking out the side twice. It was a magnificent achievement against a solid team. Hernandez was dominant and in control of the game throughout.

I had the pleasure of watching Hernandez pitch in April 2005 when he was with the AAA Tacoma Rainiers of the Pacific Coast League.  I sat behind home plate as is my custom and was amazed as I watched the then 19 year old phenom dominate.  It was quite a show and I knew that the things that I had read about him were absolutely correct.

The now 26 year old three time All-Star and 2010 Cy Young Award winner has pitched his heart out for his team and the fans of the Mariners. He is revered by them, known as “the King’s Court” at Safeco Field they love him, especially because of his loyalty to the team in signing a contract with the Mariners in 2010 when he could have gone anywhere for a lot more money.

He is a special pitcher and one cannot be happier to see a pitcher like him win a game like this. He was perfect today. Hopefully he will be again.

Blown Call by Umpire Jim Joyce ends Armando Galarraga’s Perfect Game: It is time for the “Eye in the Sky”

Armando Galarraga pitching for Toledo at Harbor Park against the Tides

On one of the most glaring bad calls that I can remember Umpire Jim Joyce ended the perfect game attempt of Detroit Tiger pitcher Armando Galarraga at what appeared to be the 27th out at first base. As the good people at ESPN switched the coverage from the Reds and Cardinals to the game between the Tigers and the Cleveland Indians I watched in anticipation of what should have been the third perfect game of the 2010 season, a feat that has never happened in the history of Major League Baseball.

With two outs in the top of the 9th and having a 3-0 lead Jason Donald hit a 0-2 slider to Tigers First Baseman Miguel Cabrera who tossed to Galarraga as he covered first. As Galarraga touched the base well ahead of Donald Joyce called the runner safe causing an almost audible collective gasp from those present and those watching on television like me.  Tigers Manager Jim Leyland immediately argued the call to no avail and an incredulous Galarraga was left to complete a one hitter.

Now perfect games get broken up all the time, usually to a hit, error or walk which allows the 28th batter to come to the plate regardless of what inning it occurs. Everyone in baseball is disappointed when a perfect game is broken up in the 9th inning, but usually because it occurs in the context of normal baseball plays it does not have the impact that this call had.

Had the call been correct Galarraga would have joined Dallas Braden of the Athletics and Roy Halliday to throw a perfect game this season, a season that is turning out to be the year of the return of the pitcher.  Galarraga who just weeks ago was pitching for AAA Toledo should have had the perfect game.  I am sure that this will renew calls for the expanded use of replay but however much this appeals my overwhelming desire to see justice done for Galarraga the ideas that I have heard don’t seem to work. My idea during last year’s horrible umpiring of the playoffs was to have an umpire in the stadium with replay in front of him and if something was an obvious blown call have the immediate opportunity to review or reverse the call and notify the umpiring crew of his decision. This would have been an opportune time for such a mechanism.  Of course some would argue against this as I would have even up until last year.

Jim Joyce is a 22 year veteran of the Major League Baseball umpire corps. He is well regarded. He has given good service to the game and umpired in the playoffs and the World Series but he will now be remembered more for this than all the rest of his career.  However with calls like this, together with the calls made in the 2009 playoff season and the rash of questionable ejections issued on what seems like an almost nightly basis by umpires for things that shouldn’t warrant an ejection I am scratching my head in bewilderment as to what to do to see better umpired games.

The fact is now that some umpires are becoming either through poor calls or confrontations with players and manager a distraction to the game. They are becoming the center of attention and certainly have no understanding of what umpiring legend Bill Klemm said “The best umpired game is the game in which the fans cannot recall the umpires who worked it.” Fans around the country will remember Jim Joyce as the umpire that blew the call that robbed a pitcher, a team and baseball fans around the country of a perfect game.

Joyce apologized saying “I just cost that kid a perfect game…it was the biggest call in my career.” but Joyce according to his post game statement was sure that Donald was safe and that it was not close until he saw the replay, it was a demonstration that sometimes even outstanding umpires get it wrong and that it was an honest mistake as terrible as it was.

Now to be fair to Joyce he did apologize and he meant it of that I am sure. He seems to have more class than some of the umpires that have made bad calls and not taken the hit after the game by admitting that they were wrong and also those that have seemed to be looking to be in the spotlight by throwing out players and managers for the most ludicrous reasons.  I know that Joyce made a mistake and he knows it and from what I see from Jim Leyland and Armando Galarraga’s statements after the game to they know that Joyce knows and is sorry for the call. Galarraga said afterward:

“I mean, a lot of respect because he [Joyce] feels so bad. He really feels bad, he probably feels more bad than me… everybody’s human… I understand, and I give the guy a lot of credit for saying, hey I really need to talk to you, to say I’m sorry. And that’s not happen really, the umpire apologize.”

All the people involved in the incident, Galarraga, Leyland and Joyce handed the situation with grace and dignity. There was no acrimony at the end of the game which is one of the things that makes baseball such a great game.

It can’t be taken back now but had there been a “eye in the sky” umpire as I suggest the call would have been reversed, everyone would have forgotten the bad call and Galarraga would have his perfect game. It would have protected Joyce and preserved the integrity of the game. I feel bad for both Galarraga and Joyce; they are victims of a system that has refused to adapt a very simple remedy to prevent such occurrences.  It is time to use an umpire to be an “eye in the sky” to get these things right. It could be done with little interruption to the game and without the absurd spectacle of the NFL’s replay system. The institution of this would help maintain the integrity of the game and it should be voted on an approved by MLB at the earliest opportunity.