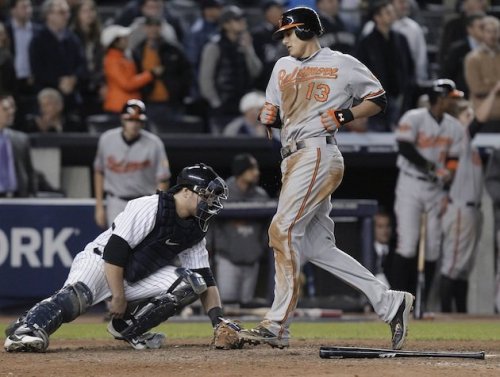 It was another long night in the Bronx but this time there was no magic from a Yankee hitter and it was yet another thrilling chapter in their 2012 season. The never say die Baltimore Orioles extended their season defeating the Yankees 2-1. Jim Johnson closed out the game in a classic pitchers duel that involved a total of 16 pitchers, 8 from each team. In the 13 innings there were only 15 hits. 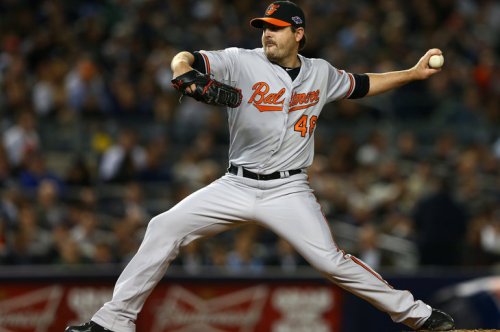 The Orioles struck first as Nate McLouth hit a solo home run in the 5th. The Yankees tied the game in the bottom of the 6th when Robinson Cano grounded out to second to score Derek Jeter who doubled to lead off the inning. Both teams failed to capitalize on when they had runners in scoring position, the Yankees threatened in the bottom of the 8th when they had runners on 2nd and 2rd with only one out. Darren O’Day entered the game and became the hero of Birdland as he struck out Alex Rodriguez and then got Nick Swisher to fly out to right. O’Day then went on to shut down the Yankees in the 9th, 10th innings allowing no hits. 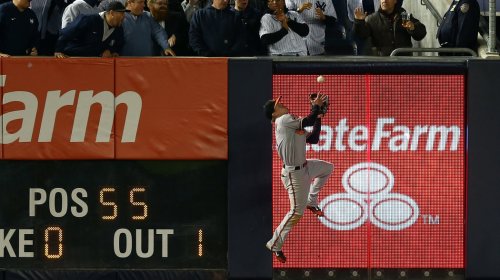 Nate McClouth makes key catch in against the wall off of Jayson Nix, he doubled up Russell Martin. (Elsa Getty Images)

Pedro Strop came into the game in the 11th and pitched two scoreless innings and in the top of the 13th, with the clock already past midnight 20 year old rookie Manny Machado doubled to right and scored on veteran Shortstop J.J. Hardy’s double to left, both off of David Phelps. The Orioles brought in Jim Johnson who put the Yankees down in order in the bottom of the 13th. 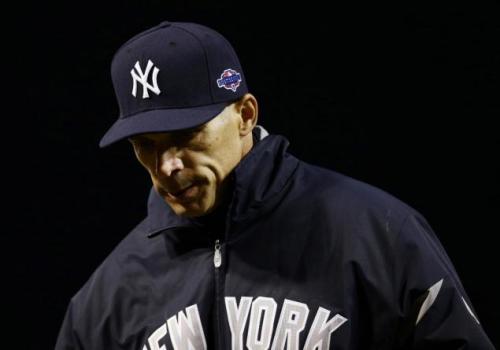 It was a tense game as both teams pitchers made the pitches that they needed and hitters struggled. The Yankees and Orioles led the majors in home runs but those big bats for the most part have been remarkably silent. The Orioles can in large part be chalked up to playoff inexperience and hitters swinging at bad pitches, or base running mistakes. The Yankees with the exception of a 5 run 9th inning in game one have been cold and without Ibanez’s home runs in game 3 this series could well be over. 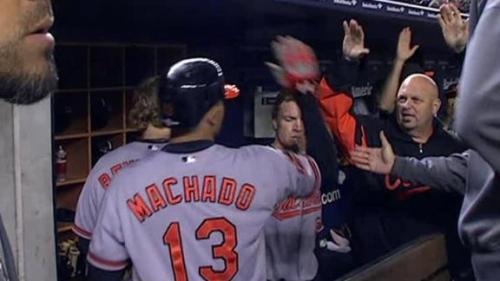 So it comes down to game five. The Orioles and Yankees who were even in the regular season against each other are even again and for one of the teams the 2012 season will be over later tonight, yes it is already Friday.

Meanwhile the magical season on the Oakland A’s came to an end against Justin Verlander and the Detroit Tigers. The Orioles or the Yankees will now play Detroit in the ALCS while San Francisco will await the winner of the Cardinals and Nationals game tonight with that series also tied at two apiece.

What a division championship series in both leagues, every series will go the full five games, all competitive and all exciting. This is playoff baseball.

Orioles Win Wild One in 17 at Fenway: Sweep Sox 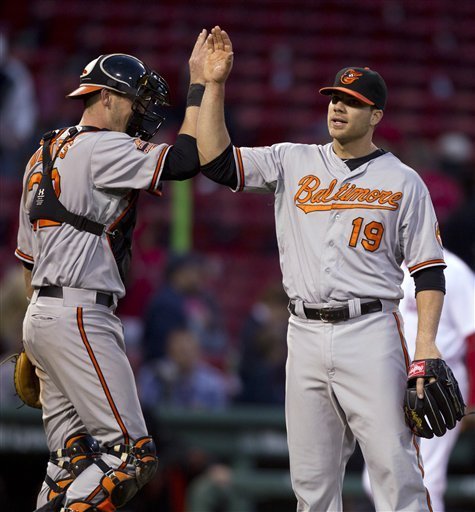 Orioles First Baseman Chris Davis being congratulated by Catcher Matt Wieters after getting the win in relief against the Red Sox. (AP Photo)

Buck Showalter’s tenacious Baltimore Orioles moved into first place in the American League East today when Orioles completed a sweep of Bobby Valentine’s reeling Boston Red Sox. The Orioles won 9-6 today in a 17 inning marathon that lasted 6 hours 17 minutes. The teams combined to use 18 pitchers who threw a combined 568 pitches.  It was the second extra inning game of the series as the Orioles defeated the Sox 6-4 in a 13 inning game on Friday night and pummeled the Sox 8-2 on Saturday afternoon.

Shortstop J.J. Hardy hit two home runs while Robert Andino also went yard for the second time in the series. Hardy was 5-8 with two homers and a double. Adam Jones hit the game winning home run in the 17th against Darnell McDonald, the Sox Left Fielder who had been called into the game in relief. Red Sox 3rd Baseman Will Middlebrooks hit a Grand Slam home run in the bottom of the 5th inning.

The most remarkable thing about this game was Orioles Designated Hitter Chris Davis who was 0-8 at bat getting the win in relief. Davis who had last pitched in a community college game after having pitched in high schoolserved up two scoreless innings of relief to get the win. He had two strike outs a walk and gave up two hits but got the win.

Darnell McDonald, the Outfielder called to pitch for the Sox in the 17th did not fare as well giving up 3 runs on 2 hits while walking two batters. Boston starter Clay Buchholz gave up 5 runs on 7 hits with 4 walks in just 3.2 innings of work.

It was the fist time since 1968 that a position player won a game in relief in the American League although Phillies Infielder Wilson Valdez got a win in a 19 inning game on May 25th 2011 against the Cincinnati Reds. The game was also the first game where both teams used position players to close the game in relief since 1925. Then it was Hall of Famers Ty Cobb of the Detroit Tigers and George Sisler of the St Louis Browns did it in the second game of a double header on October 4th 1925.

The Orioles are now 19-9 and 10 games over 500 since June 25th 2005. They are 11-5 on road and 10-5 vs AL East. There are still a lot of games left in the season and many including many O’s faithful don’t believe in the team. I think that they are a far better team, a deeper than than a lot of people give them credit to be. I think that they will break .500 this year if not do even better. With the Red Sox in disarray and the O’s playing the rest of the AL East tough I think that the Orioles will have a very respectable season.  Their pitching staff, especially the bullpen is doing well and young players blooded by the brutal AL East are beginning to shine.  Yes it is a long season and they play in what is arguably baseball’s toughest division but I expect them to surprise people this year.

The Orioles begin a home stand at Camden Yards Monday hosting the very tough Texas Rangers followed by the always tough Tampa Bay Rays. The road trip was amazing but the Orioles need to be totally focused after the exhausting series against the Red Sox to win against these two very tough teams.

In other interesting baseball news this week, Jared Weaver of the Angels pitched a no-hitter, Albert Pujols got his first home run of the year and Mariano Rivera of the Yankees was lost for the season due to a freak pre-game injury to his ACL and meniscus.  Bryce Harper, the 19 year old wunderkind of the Nationals broke into the majors in a big way this week showing a prowess very unusual for a player his age. He has shown exceptional ability at bat, on the bases and in the outfield.

Until tomorrow when I take on the topic of the sweeping changes brought about by the European elections and their possible effect on us over here on this side of the pond.

Orioles Down Yankees in the Bronx Go to 16-9 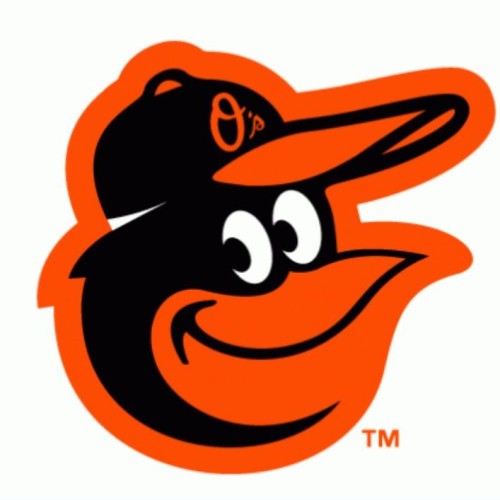 The Baltimore Orioles are one of the pleasant surprises of the first month of the 2012 baseball season. The team is winning they now are 16-9 and took two of three from the New York Yankees in the Bronx. In those three games Orioles pitchers held the Yankees to just 3 runs while the scored 13 runs in the series. Earlier in the season the Yankees took three from the Orioles in Baltimore but two of those were in extra innings where in both cases the Orioles failed to score with runners in scoring position in the 9th and 10th innings.

The Orioles pitchers are holding up well with the 4th best ERA in the Majors at 2.92 with their starters and relievers doing very well. Pitching has been a major problem for the Orioles the past few years and if the young pitchers, particularly Jake Arrieta who pitched an 8 inning shutout tonight continue to pitch well they O’s will make the American League East a much more interesting division this year.  Now led by Jason Hamel (3-1 1.97 ERA) the Orioles starters are making some quality starts. With Jim Johnson as their closer and other relievers pitching well the team is much deeper than in years past.

The Orioles also have hitting and are hitting with power, 3rd in the majors in home runs (33) and 6th in the majors for in slugging percentage (.446).  The Orioles have a number of potential All Stars including former All Stars Adam Jones, Matt Wieters and Nick Markakis. Second Baseman Robert Andino is having a stellar start to his season as is Left Fielder Nolan Reimold. Shortstop J.J. Hardy and First Baseman Mark  Reynolds are providing additional power in the lineup.

At with a 7-5 record against their AL East rivals so far they are doing much better in the division. The are 6-1 against the AL Central and 3-3 against the West.

The Orioles head to Boston to begin a 3 game series with the Red Sox at Fenway beginning on Friday. They will then travel to play the red hot Texas Rangers in Arlington before returning home to face the AL East leading Tampa Bay Rays who I think are the best team in the division. Taking 2 of 3 from the Yankees, which included Manager Buck Showalter’s 1000th managerial win in New York was important. If the Orioles can continue what they are doing it will be an exciting year for all of us Orioles fans.

The season is still young but this year I think is the year the Orioles become a real force in the AL East and the League.