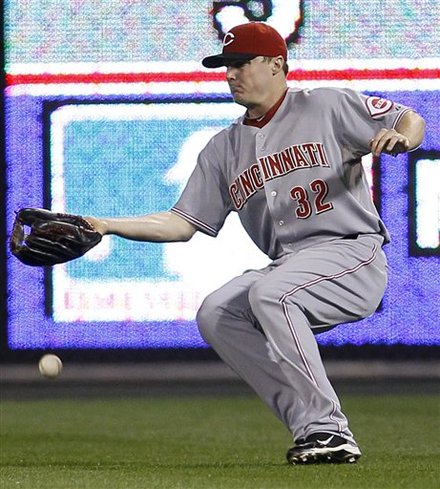 The Cincinnati Reds looked like that they had cracked the code on how to beat the Phillies after having been no-hit by Roy Halladay on Wednesday.  Tonight they went up against Roy Oswalt and drove the Phillies veteran out of the game after 5 innings.  Combining solo home runs by Brandon Phillips and Jay Bruce as well as some “small ball” took a 4-0 lead and looked like they were going to cruise to victory in game two of their NLDS series against the Phillies. Then someone somewhere flipped the self-destruct switch.

Once that happened in the 5th inning the Phillies got on the board with 2 runs.  In that inning the with 2 outs and Bronson Arroyo in control the Phillies were aided by back to back errors on Brandon Phillips and Scott Rolen to load the bases giving Chase Utley the chance to drive in 2 runs with a two out single.

The pain continued for the Reds in the 6th inning when Jayson Werth walked to lead off the inning and after Jimmy Rollins popped out Arroyo left being relieved by Arthur Rhodes who struck out Raul Ibanez for the second out. Werth stole second then Rhodes hit Carlos Ruiz in the knee to put runners at first and second.  Ben Francisco came in as a pinch hitter and Logan Ondrusek relieved Rhodes. Ondrusek then hit Francisco in the bill of his batting helmet just about an inch from his head in what could have been a tragic play. Instead it loaded the bases to bring up Shane Victorino. Ondrusek then walked Victorino to make the score 4-3.

Things got worse for the Reds in the 7th inning. They brought out rookie fireball pitcher Aroldis Chapman to face Chase Utley and Ryan Howard. Chapman hit Utley in the forearm with a 101 mile an hour fastball to put the lead runner aboard. Chapman sent Howard down on strikes.  This brought Jayson Werth to the plate; he hit a ground ball that Utley beat out at second to put two aboard. Jimmy Rollins came to the plate and hit a line drive to right field that Jay Bruce who committed an error simply missing the ball to score Utley while Werth scored when Brandon Phillips dropped the relay with Rollins taking . Raul Ibanez singled Rollins to third and Carlos Ruiz hit into a fielder’s choice to score Rollins. Chapman then gave up a single to Mike Sweeney before being relieved by Nick Masset who got Shane Victorino to ground out leaving the Reds behind by a 6-4 score.

The Phillies got an insurance run in the bottom of the 8th when with 1 out Chase Utley singled and stole second. Masset intentionally walked Ryan Howard and Jayson Werth singled to score Utley before Masset retired the side.

The Phillies brought in closer Brad Lidge and after walking the leadoff batter sent the next three batters down in order to secure the victory and get the save. Phillies reliever Jose Contreras got the win while rookie Aroldis Chapman got the loss.

The Reds meltdown which included 4 errors which led to 5 unearned runs and 3 hit batters who all scored.

The Phillies now go to the Great American Ballpark where on Sunday Cole Hamels (12-11 3.06 ERA) will try to get the sweep against Johnny Cueto (12-7 3.64 ERA).  The last time Hamels faced the Reds he won the game giving up 6 hits and allowing no runs in 7.2 innings work. Things do not look promising for the Big Red Machine.