Why the Libyans were able to Overthrow Gaddafi and what We can learn from It: A Lesson from the work of T E Lawrence

“Do not try to do too much with your own hands. Better the Arabs do it tolerably than that you do it perfectly. It is their war, and you are to help them, not to win it for them. Actually, also, under the very odd conditions of Arabia, your practical work will not be as good as, perhaps, you think it is.” T. E. Lawrence

Lawrence with Arab fighters at Aqaba and Emir Faisal Hussein (below)

The Libyan revolution succeeded in overthrowing Moammar Gaddafi and his 42 year tyranny because the West did not turn it into an American or NATO war. By limiting involvement to airpower, coastal interdiction and tiny numbers of advisers the United States and NATO avoided the costly trap of putting large numbers of troops on the ground.  Such action would have been counterproductive in Libya and in the Arab world. While the action certainly would have ridded the world of Gaddafi and his regime much more quickly it would have emasculated the Libyans who had taken up arms against Gaddafi by turning it into our war, a war which would have been seen by many Libyans and Arabs as just more Western Imperialism.  Critics can always find fault in any military operation but for once in the Post Cold War era the United States and NATO knew their limitations and that the revolution had to be the work of the Libyans themselves.

T E Lawrence understood the Arab mind more than most westerners ever will.  Living with and helping lead the Arab tribes that revolted against the Ottoman Empireduring the First World War he learned the culture as well as came to understand the strengths and weaknesses of the Arab tribes.  One thing that can be said is that most Americans like many of Lawrence’s counterparts in the British political leadership, military and diplomatic services is that far too few have taken the time to either understand or respect the Arabs. When I was in Iraq the senior Iraqi Officers that I met were amazed and impressed that I knew their history and culture because so few people did. When I mentioned their victory at Al Kut Amara, or their capture of the Al Faw peninsula at the end of the Iran-Iraq war they beamed with pride.

One of the things that Lawrence understood was the profound sense of personal pride and honor which imbued the Bedouin.  He understood that the various Bedouin tribes had no love for the Ottoman Turks who treated them with distain.  He also understood that they needed to be the ones that defeated the Turks.

The campaign waged by Lawrence and the Bedouin confounded the Turks. Working with Emir Faisal the son of Sherif  Hussein of Mecca he convinced his force of Arab irregulars not to make a direct assault on the city of Medina which was heavily garrisoned by the Turks.  Instead he expanded the battlefield by exploiting the natural weakness of the Turks, the need for constant supply via the Hejaz Railway.  In doing so he tied up large numbers of Ottoman troops that could have been used against the forces of General Allenby that were waging a conventional campaign and which was very successful in defeating the Ottomans.

While Lawrence was a part of a much larger effort his work in helping the Arab revolt was of great importance to the success of the British efforts against the Ottomans.  Unfortunately the good will that Lawrence and others like him built did not last. The British and French governments did not respect treaties that supported Arab independence and instead dividing the region between them under the terms of the 1916 Sykes-Picot Agreement. They left an isolated and abandoned Hashamite kingdom in the Hejaz which was conquered by the Saudis to whom the British had shifted their support.

A few hundred miles away the British did not take advantage of indigenous Arab resentment of the Ottomans in Mesopotamia.  The British invaded Mesopotamiain 1914 expecting to defeat the Turks easily.  However the British did precious little to enlist the support or help the Iraqi Arabs.  The campaign was long and included the worst defeat of a British Army during the war at the Siege of Kut Al Amara in 1916 at the hands of a largely Iraqi Ottoman 6th Army.  Some 30,000 British and Indian soldiers were killed or died of disease and 13,000 captured many who did not survive captivity.  After the war Lawrence remarked “The people of England have been led in Mesopotamia into a trap from which it will be hard to escape with dignity and honor. They have been tricked into it by a steady withholding of information.”

Faisal would go on to be elected as the new Kingdom of Syria by the Syrian National Congress in March of 1920 but kicked out by the French who enforced the Mandate of Syria in July.  In 1922 after the British brutally suppressed an Iraqi independence movement they appointed Faisal as the King of Iraq. When the British “gave” the Iraqis their independence in 1932 Faisal was the head of state.  He died in 1933 and the British maintained a tight grip on the country and put down another Iraqi nationalist revolt led by the Army in 1941.  The British would remain in Iraq until 1958 when a military coup which is known as the “14 July Revolution” overthrew the government and killed king Faisal II. 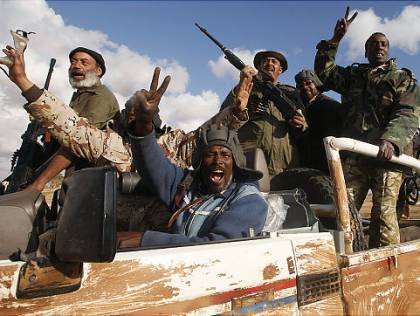 In Libya there was great temptation and political pressure for the United States to begin an early air campaign without significant support in the international community.  Some say that this caused more casualties and suffering for the Libyans, but it helped in the long run because Libyans saw it as their war to win even when NATO began its air campaign against Gaddafi.  The air campaign was a great help to the newly proclaimed National Transitional Council in Benghazi and probably saved them from being defeated but it was the courage of Libyans on the ground who sacrificed themselves against a better armed and trained force to retake the country.

The revolt restored the pride of an oppressed people, something that could not have taken place had the campaign been led by the United States and NATO with boots on the ground.  People forget that in 2003 the majority of Iraqis welcomed US forces as liberators.  This lasted until Paul Bremer unilaterally dissolved Iraqi military, police and civil servants that were actively helping us, turning them into enemies overnight.  The liberated Iraqis felt betrayed and dishonored by the United States just as they had been by the British following the First World War.  Bremer did this without ensuring that the Iraqi Army weapons depots were secure thereby providing Sunni and Shia insurgents with vast amounts of weapons.  These weapons were turned against American and coalition soldiers and even the UN and NGOs which were just beginning to helpIraqrebuild.  The result of Bremer’s was a protracted insurgency and civil which cost us nearly 4500 soldiers killed and over 32000 wounded and hundreds of thousands of Iraqis killed, wounded or displaced.  If one wants an answer as to why the Iraqis rose up against the United States occupation in late 2003 they need to look no farther than this. The Iraqis only want to be independent and saw the Bremer’s actions in the lens of their history with the British.

The decision of President Obama, French President Sarkozy and British Prime Minister Cameron to work through the UN and NATO was the correct one. It enabled the Libyans to overthrow Gaddafi and it kept our military involvement to a minimum.  While it cannot be a template for all future military operations in the Arab world as every Arab country is different it does have lessons for us. Libya was a perfect place to use this method. It had a population that wanted Gaddafi gone and were willing to die trying to overthrow him.  It had no huge urban population centers teaming with uneducated and poverty stricken people with little hope.  It has substantial oil wealth and an oil infrastructure which unlike Iraq was not destroyed during the war or in bad repair due to years of sanctions. It also enjoyed a key geographic location which made NATO air intervention much easier than almost anywhere in the Middle East because we did not need bases in Libya or its neighbors to run the operation. It was conducted from Europe and platforms at sea.   This is not possible in most other Arab countries. The task would be much more difficult if the target was Syria.

Now is the time to help the Libyans in rebuilding their country and letting them continue to regain their pride by letting them do as much as possible.  They won’t do it the way we would but that is okay. They will make mistakes but given time the people that shed their blood together to rid themselves of Gaddafi can work together to build a free country.  Those that go to Libya to assist the Libyans need to keep this in mind if they really want to see a strong, robust and successful Libyan democracy take hold.  Let’s also make sure that the good feelings that the Libyans have for us now remain by simply treating them as we would like to be treated.  Simply put we have to stop treating them as vassal states that we only value for their natural resources while we disrespect their people, history and culture.

As for the future it would be a wise investment to ensure that diplomatic, military and NGO personnel be trained and educated to understand and appreciate the Arabs and other cultures that are different than ours in the West.  The West has much to overcome in its relationship with the Arabs most of which is self inflicted. But we can try to start again.