Note: This is the second in a series of articles on US Aircraft Carriers. The first article “The First Aircraft Carriers Part One: The First American Flattops- Langley, Lexington and Saratoga” can be found at this link: https://padresteve.wordpress.com/2009/10/08/the-first-aircraft-carriers-part-one-the-first-american-flattops-langley-lexington-and-saratoga/

I expect to write a follow up article on the Yorktown class, followed by one on the World War II Essex class and Independence class carriers.  At some point I might tackle the post war modernizations, modifications and careers of the Essex class.

Following the success of the Langley, Lexington and Saratoga the Navy began to design aircraft carriers from the keel up.  The Japanese had already done so when they commissioned the IJN Hosho in 1922. Hosho displaced 10,000 tons was 579 feet long full load carried 26 aircraft at a top speed of 25 knots.  Hosho would serve in a secondary role in the Second World War, surviving the war with minor damage.

The British commissioned the HMS Hermes in 1923. She was slightly larger than Hosho at 12,900 tons and 598 feet long and capable of carrying 15-20 aircraft. She had a maximum speed of 25 knots.  She was sunk by Admiral Nagumo’s carrier strike force off Ceylon on 23 January 1941.  Both of these ships served in fleet support and training roles much of their careers being smaller and less capable of operating more modern aircraft developed in the late 1920s and 1930s. 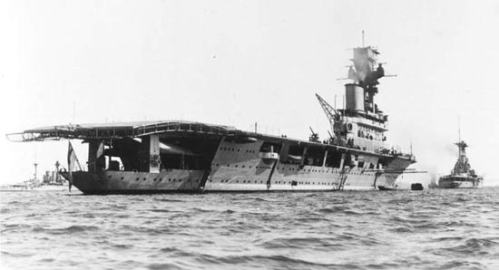 The United States Navy was late compared to the Japanese and British ion designing carriers from the keel up, however when it did they were larger, faster and carried a far larger number of aircraft than the Hosho or Hermes. 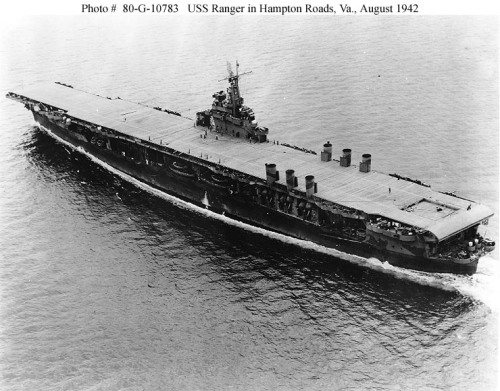 The Ranger was commissioned on June 4th 1934 and displaced 14,500 tons, was 769 feet long and had a maximum speed of 29.25 knots.  She carried 86 aircraft, over four times more than Hermes and three times that of Hosho.  She was not initially equipped with a catapult though one would be added later with a more advanced one being retrofitted in 1944.  She had a unique funnel arrangement having 6 small funnels located aft along both sides of the flight deck. These could be repositioned out so as not to interfere with aircraft operations.

She had a small island structure.  This was not a particularly satisfactory design and would not be repeated in the fleet carriers which followed but would be used on the Independence class Light Fleet Carriers (CVL) and all Escort Carriers (CVE).  Ranger would operate with the Pacific Fleet in the 1930s before returning to the Atlantic in early 1939.  She would participate in Neutrality Patrols to protect US Shipping and missions to transfer US Army Air Corps aircraft across the Atlantic.  After the US entry into the war would participate in the Allied landings in French North Africa, Operation Torch launching 496 sorties against Vichy French ships, airfields and ground targets.  She remained in the Atlantic in 1943 conducting patrols, transporting Army Air Corps aircraft across the Atlantic and operating with the British Home Fleet conducting raids against German ships and installations at Bodo Norway.  Following these operations she would be refitted and sent to the Pacific to serve as an advanced training carrier for pilots and air crew being trained for combat duty.   She would decommission in October 1946 and sold for scrap in 1947. 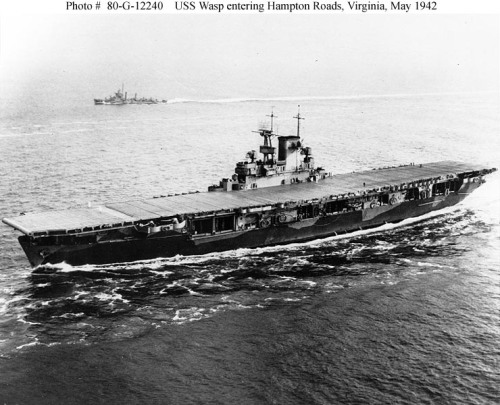 She was not used in a combat role in the Pacific as she was determined to be too small and too slow and having very limited armor protection.  However her design was such that it could be refined for future classes of carriers including better armor protection, expanded anti-aircraft capabilities and better command and control facilities.

The second of these transitional carriers was the USS Wasp; CV-7 was built as a replacement under the Washington Treaty for the Langley and her displacement was limited to 14,700 tons.  Laid down in 1936 and commissioned in April 1940 she benefitted from experience with the Ranger and though roughly the same displacement as Ranger and only marginally faster.  Wasp was only 688 feet long as compared to Ranger, but had better protection and a more efficient design that was similar to the larger Yorktown class ships.  She carried over 80 aircraft and was equipped with 2 flight deck and two hanger deck catapults. Wasp’s career was short but action filled.  During 1940 through early 1942 she remained in the Atlantic conducting training, Neutrality patrols, shadowing Vichy French warships in the Caribbean, transporting badly needed British Spitfires to the besieged island of Malta and operating with the British Home Fleet against the Germans.

With the shortage of carriers in the Pacific due to the loss of Lexington and damage to Saratoga Wasp was transferred to the Pacific where her air group received new aircraft prior to sailing to the South Pacific to take part in the invasion of Guadalcanal in August 1942.  Her air group acquitted itself well in action against the Japanese in the initial operations and she would remain in the area of operations.  On September Wasp was escorting troop transports carrying the 7th Marine Regiment to Guadalcanal.   As she recovered aircraft she was hit by 2 torpedoes from the Japanese submarine I-19.  I-19 had executed one of the most successful attacks by a Japanese submarine on US Naval Forces during the war, sinking Wasp, damaging the Battleship North Carolina and the destroyer O’Brien which later sank while sailing to the United States for permanent repairs.  At about 1420 the powerful 24” “Long Lance” torpedoes hit the Wasp in the vicinity of her ammunition magazine and aircraft gasoline tanks.  The fires rapidly spread throughout the ship igniting ready ammunition for the anti-aircraft guns.  Despite damage control efforts the fires spread and large secondary explosions wracked the ship forcing her abandonment at 1520.  With the ship abandoned she was sunk by the USS Lansdowne going down at 2100 with the loss of 196 of her crew. 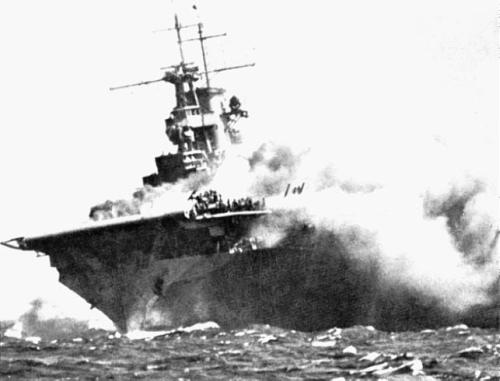 Though small and short lived the Wasp was a successful design incorporating a folding T-shaped deck edge elevator which was a predecessor of the much larger ones found on modern US Aircraft Carriers. The Ranger despite her limitations was far more capable than other countries early designs and served well in the Atlantic and as a training platform.