The Battle Fleet that Never Was: The USS Washington, the South Dakota Class and the Lexington Class Battle Cruisers 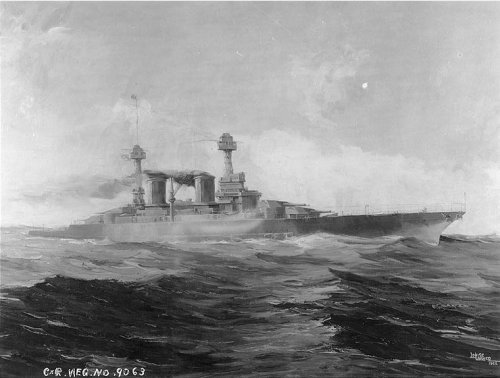 Artist depiction of the Lexington as Battle Cruiser

Note: This is the first of a series of articles on what might have happened if the Washington Naval Treaty had not been signed. This article is a look at the American fleet that never was, the following articles will be in the alternative history genre looking at a war breaking out in the Pacific in 1937.

Historians almost always muse on what might have been.  One of the most significant events of the years following the First World War was the Washington Naval Conference and Treaty. The treaty called by the President Harding and conducted under the auspices of the League of Nations was the first international disarmament conference and attended by none nations having interests in the Pacific. The major players in the conference from the naval power perspective were the British, Americans, Japanese, French and Italians.  Each nation had an agenda for the conference, for the United States it was to break the Anglo-Japanese naval accord and to limit the Japanese naval build up.  The British, exhausted and financially reeling from the effects of the First World War had a number of goals.  Though they had the largest navy and the most Dreadnaught type battleships and battle cruisers of any Navy many of its ships were obsolete or worn out from wartime service.  They had little capital to put into new ship construction, especially considering the vast resources of the United States which was already well into a vast naval buildup including ships that would be among the largest and most heavily armed in the world.  It was in the interest of Britain to limit the both the number, tonnage and armament of these ships.

The treaty which was ratified in 1922 limited the United States and Great Britain to a maximum of 525,000 tons in their battle ship fleets and 125,000 tons in aircraft carriers.  The Japanese agreed to a limit of 315,000 tons and the French and Italians 175,000 tons each.  Tonnage for battleships was limited to a maximum of 35,000 tons with a limitation on guns size to 16 inches.  Since the bulk of the ships planned or being built by the US and Japan exceeded those limits they would be effected more than the British whose post war shipbuilding program had not begun in earnest. For the US this had a dramatic effect on its planned fleet, which if built would have become the dominant Navy of the 1920s and 1930s.  It is fascinating to think what might have happened if the treaty had not been signed and what the battle fleets of the various nations would have looked like in 1941 had war not come sooner.

The American Navy went to war in 1941 with 18 battleships, the most modern of which were the new North Carolina and Washington and the rest averaging over 20 years old in 1941. The most modern of these ships were the Colorado class composed of the Colorado, Maryland and West Virginia each mounting eight 16”/50 guns.  The fourth ship of the class the Washington was sunk as a gunnery target when 75% complete under the terms of the Washington Naval Treaty.

However it was a battle force that could have been much larger and far more capable, a force that may not been regulated to convoy escort duties and shore bombardment but instead may have taken on the Imperial Navy on the high seas in battleship combat not seen since Jutland.  Yet this was not to be, the great fleet of super-battleships was never built and only two hulls completed the Lexington and Saratoga which instead of being completed as battle cruisers were completed as aircraft carriers.

The Americans had set out to build the largest, most modern and powerful battleships and battle cruisers afloat.  The Navy had already produced the Colorado class super-dreadnaughts which were equal to or superior to any battleships of their era.  The Navy planned for a class of six battle cruisers which would be superior to any similar ship afloat, the Lexington class and a class of six battleships, the South Dakota class mounting twelve 16”/50 guns in triple turrets.

The two classes were leviathans and to counter them the British made plans for a four ship 48,000 ton class of battleships, the N3 project mounting nine 18” guns and a class of battle cruisers mounting nine 16” guns.  The ships of both classes were designed with their main battery mounted forward in order to save weight on armor.  Both classes were canceled with the signing of the treaty and none were laid down.  It is suggested by some that the G3 battle cruiser design was a ploy to get the United States to agree to the cancellation of its capital ship projects. The guns planned for the G3 class were mounted on the Nelson class battleships which complied with treaty limits.  Although powerful ships they suffered from engineering problems which often reduced their speed from what was designed.  Along with the HMS Hood, the sole ship completed of the four ship Admiral class the Nelson and Rodney were the most modern battleships in the Royal Navy until the King George V class entered service in 1941.  The Japanese planned for eight battleships and eight battle cruisers centered on the two existing Nagato class battleships and 4 Kongo class battle cruisers to be joined by the two ship 40,000 ton Tosa class battleships, the Tosa and the Kaga, of which Kaga was completed as an aircraft carrier. They were to be joined by the 4 improved Tosa class or Kii class fast battleships of 42,000 which were ordered but never laid down.  These were to be joined by the four ship Amagi class battle cruiser class.  Amagi was destroyed during the Tokyo earthquake of 1922 and scrapped and Akagi completed as an aircraft carrier.  All of the planned Japanese ships were to mount ten 16” guns in five twin turrets.

The six ships in the Class, South Dakota, Indiana, Montana, North Carolina, Iowa and Massachusetts were all scrapped in accordance with the treaty when partially complete, the North Carolina being in the most advanced stage of construction, 37.8% when construction was halted.

If all of the ships, including the Washington of the Colorado class been completed the US Navy would have had eight battleships and six battle cruisers mounting 16 inch guns to compliment the nine battleships of the Nevada, Pennsylvania, New Mexico and California classes which all mounted 14 inch batteries.  The fleet would have been superior to either the Royal Navy or the Imperial Japanese Navy even with the ships planned by those navies.  Economically the United States was the only nation in the world capable of sustaining a naval arms race of this magnitude, the British economy and political will would have been unable to sustain it and the limited industrial capacity and dependence on the United States for raw materials and machine tools needed to construct their ships would have limited their ability to produce such a fleet. Without the conversion of the Lexington, Saratoga and their Japanese counterparts the Akagi and Kaga into aircraft carriers the development of the carrier would likely have gone slower and that type of ship may not have risen to the prominence that they gained during the Second World War.

8 responses to “The Battle Fleet that Never Was: The USS Washington, the South Dakota Class and the Lexington Class Battle Cruisers”