Salvaging the Fleet: Salvage Efforts after the Attack on Pearl Harbor

One of the more interesting aspects of the Pearl Harbor attack were the efforts of the US Navy to salvage and return to duty the ships sunk or so heavily damaged that they were thought to be irreparable after the attack. 21 ships were sunk or damaged during the attack, roughly 20% of the fleet present.

Of these were battleships, the USS Arizona sunk by a cataclysmic explosion, her broken hulk with her collapsed foremast the iconic symbol of the attack. USS Oklahoma was capsized on Battleship Row.  USS Nevada was grounded and sunk off Hospital Point after an abortive attempt to sortie during the attack. USS California and USS West Virginia lay upright on the bottom of Pearl Harbor, their superstructure, distinctive cage masts and gun turrets visible above the oily water.

The former battleship USS Utah lay capsized on the far side of Ford Island while the light cruiser USS Raleigh was fighting for her life barely afloat near Utah.  The ancient Minelayer USS Oglala was laying on her side next to the light cruiser USS Helena at the 1010 Dock. She was not hit by a bomb or torpedo but was said to have “died of fright” when Helena was hit by a torpedo, the blast which opened the seams of her hull. The destroyers USS Cassin and USS Downes were wrecks in the main dry dock. USS Shaw was minus her bow in the floating dry dock after exploding in what was one of the more iconic images of the attack. Other ships received varying amounts of damage.

As the engineers, damage control and salvage experts looked at the damage they realized that every ship would be needed for the long term fight. The building program of the US Navy was just beginning to pick up steam and it would be some time before new construction could not only make up for the losses but also be ready to fight a Two Ocean War. The decision was made to salvage and return to duty any ship deemed salvageable. 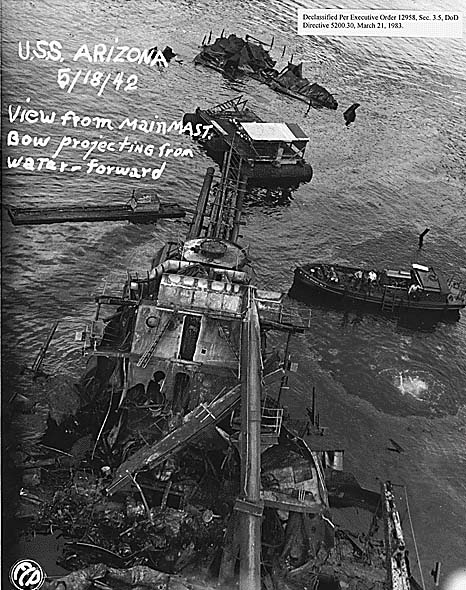 Even the seemingly less important ships needed to be rapidly salvaged. Some which initially appeared to be unsalvageable needed at the minimum to be cleared from dry docks and docks needed by operational or less damaged ships. Likewise equipment, machinery and armaments from these ships needed to be salvaged for use in other ships.

Even by modern standards the efforts of the Navy divers and salvage experts and the civilians who worked alongside them were amazing. In the end only three of the 19 ships never returned to service. The work began quickly and on December 14th Commander James Steele began to direct the salvage operations on the sunken hulks. Captain Wallin relieved Steele on January 9th 1942. Wallin formed a salvage organization of Navy officers and civilian contractors.The civilian contractors were instrumental in the operation. Many had experience in salvage operations that exceeded the military personnel. 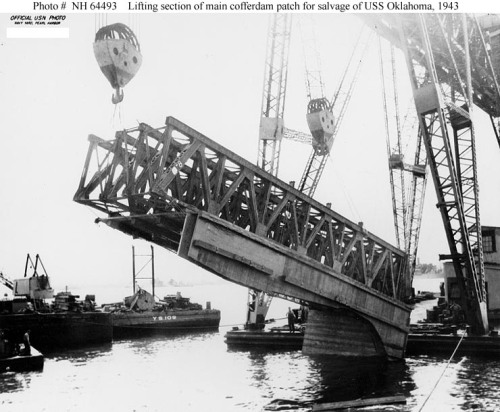 Wallin prioritized the tasks of his organization working to recover items that could be of immediate use to the fleet such as anti-aircraft guns and to salvage less damaged ships in order to return them to service. They worked at the task through 1944. The divers faced extraordinary dangers, poisonous gas, unexploded ordnance, treacherous tides and the uncertainty of the destruction of the ships below the surface that could not be ascertained apart from diving on the wrecks.

The divers recovered bodies whenever possible, salvaged equipment, removed weapons and ammunition, made temporary repairs and help rig the ships for righting or re-floating. In each case the salvage experts, divers and engineers faced different challenges.

Arizona was never raised. Her superstructure was cut down, main battery and some anti-aircraft guns removed. The main batter guns were delivered to the Army Coastal Artillery for use as shore batteries but none reached an operational status before the end of the war. The dives aboard were so dangerous that eventually the attempts to recover bodies ceased as several divers lost their lives in the wreck.  Over the years the National Parks Service has continued to dive on the wreck to assess it as a war grave and memorial.

Utah too was not raised. She was righted in 1942 but efforts to do more were halted because the elderly wreck had no remaining military value. Her wreck along with that of Arizona are war graves, many of their crew members, including over 1000 of Arizona’s men forever remain entombed in their ships. When I visited Pearl Harbor in 1978 as a Navy Junior ROTC Cadet and visited both memorials I was humbled at what  saw. They are haunting reminders of the cost paid by sailors during wartime. 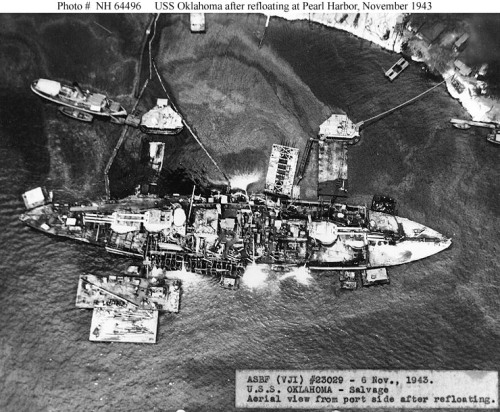 The salvage of the Oklahoma was one of the more challenging endeavors faced by Wallin’s men. Hit by at least five torpedoes during the attack the great ship capsized, her tripod masts digging deep into the mud of the harbor as she settled. Over 400 over her crew lay dead inside the ship. Since it was apparent that the ship was a total loss the salvage operations did not commence until the middle of 1942. The primary goal of the operation was to clear needed space for berthing large ships along Battleship Row. The operation involved making the ship as watertight as possible, solidifying the bottom of the harbor around her to enable her to roll and emplacing a massive system of righting frames, anchor chains and shore mounted winches and cables. The process involved cutting away wrecked superstructure, removing ammunition, weapons and the bodies of those entombed in their former home. She was completely righted in July 1943, and floated again in November. Moved to a dry dock in December she was made watertight and moored in another part of the harbor. Following the war she was being towed to a scrap yard but sank in a storm in May 1947. 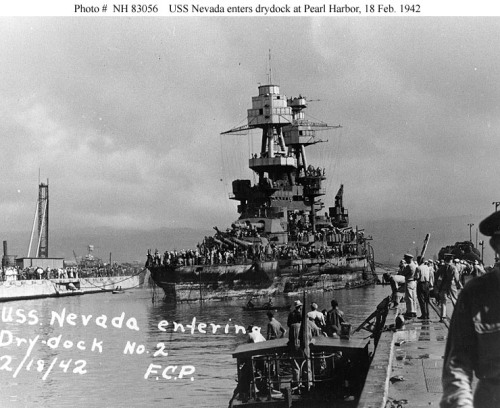 Nevada was the first major ship salvaged. She was re-floated in February 1942 and after temporary repairs sailed to the West Coast on her own power. After repairs and a significant modernization of her anti-aircraft systems was complete she returned to action in 1943 in the invasion of Attu Alaska. She participated in many amphibious operations including Normandy, Southern France, Iwo Jim and Okinawa. She survived the Atomic Bomb tests in 1946 but wrecked and radioactive she was sunk as a target off Hawaii in 1948. 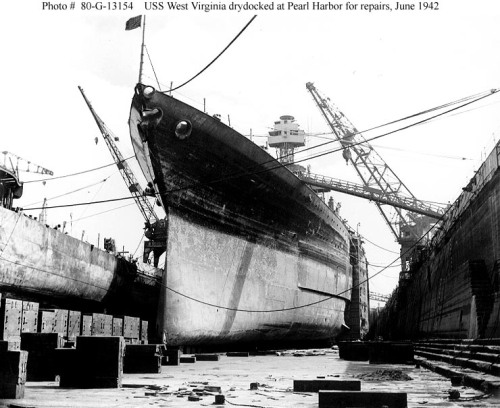 California was raised in March and after temporary repairs sailed under her own power to the West Coast. Her repairs and modernization were a major undertaking. Fully reconditioned and modernized to standards of most modern battleships she returned to service in January 1944. She served in retaking Saipan, Guam, Tinian as well as Leyte Gulf were she had a significant part in the Battle of Surigao Strait. Hit by a Kamikaze she was repaired and returned to action at Okinawa and support the occupation operations of the Japanese Home Islands. She was decommissioned in 1947 and sold for scrapping in 1959.

West Virginia suffered the most severe damage of the battleships returned to duty. She was raised in July 1942 and after repairs sailed to Puget Sound Naval Shipyard. Like California she was completely rebuilt and returned to action in October 1944 in time to take the lead role in destroying the Japanese Battleship Yamashiro. She served throughout the remainder of the war in the Pacific at Iwo Jima, Okinawa and the occupation of Japan. 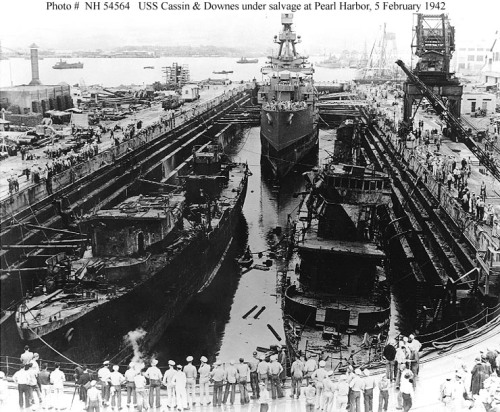 The Mahan Class destroyers Cassin and Downes were so badly damaged sitting in the Dry Dock Number One with Pennsylvania that initially they were believed beyond salvage. However after closer inspection it was determined that the hull fittings, main weapons systems and propulsion machinery on both ships were worth salvaging. These items were removed, shipped to Mare Island Naval Shipyard and installed on new hulls being constructed. The hulks of the old ships were scrapped at Pearl Harbor. Those ships were commissioned as the Cassin and Downes and served throughout the war.

Both were decommissioned in 1945 and scrapped in 1947. Their sister ship Shaw which had blown up in the floating dry dock was wrecked from her bridge forward. However the rest of the ship including her engineering spaces were intact. A temporary bow was fashioned and the ship sailed to Mare Island under her own power. Completely overhauled she was back in service by July 1942. She was decommissioned in 1945 and scrapped in 1946.

The ancient minelayer Oglala was raised in July and sent back to the West Coast where she was repaired and recommissioned as an internal combustion engine repair ship. She survived the war was decommissioned and transferred to Maritime Commission custody. She was a depot ship at the Suisun Bay Reserve Fleet until 1965 when she was sold for scrap.

The salvage feat to return these ships to duty was one of the most remarkable operations of its type ever conducted. Not only were most of the ships salvaged but most returned to duty. While none survive today many played key roles during the war. Artifacts of some of the ships are on display at various Naval Bases, Museums and State Capitals. They, their brave crews and the Navy Divers and civilian diving and salvage experts who conducted this task exhibited the finest traditions of the US Navy. The successors of the Navy divers at Mobile Diving Salvage Units One and Two still carry on that tradition today.

11 responses to “Salvaging the Fleet: Salvage Efforts after the Attack on Pearl Harbor”