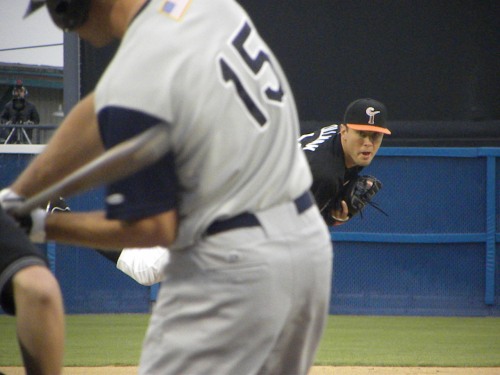 The Tides began their 8 game road trip through North Carolina and Georgia with a win in Charlotte with a 5-3 victory over the Knights.  The Tides won in front of a Charlotte crowd of 4359 in ideal conditions partly cloudy with a temperature of 81 at game time and light winds.  The win was highlighted by Chris Tillman’s (1-3 6.11) best start of the season.  Chris pitched 8 innings giving up 3 runs on 7 hits striking out 5 allowing no walks.  He threw just 90 pitches of which 62 were strikes.  Chris seems to have gottn his confidence and mechanics back as he pitched with control and efficiency. The Knights runs came with 2 outs in the bottom of the 6th on a three run home run by Knight’s Catcher Tyler Flowers.  Frank Mata (1-0  S2  1.13) got the save retiring the Knights in order striking out two.  Charlotte reliever Vince Elarton (0-1 2.84) got the loss.

The Tides offense showed power again with Brandon Snyder, Michael Aubrey and Adam Donachie going yard on three solo shots. Snyder also had an RBI double and it seems that Brandon is getting his time and mechanics back after a dismal start.  The Tides and Knights will face off tonight at 7:15 at Knights Stadium with Jake Arrieta (1-0 0.50) facing Carlos Torres.

Brandon Snyder had a home run and double in the win

On the personnel side of the house Rhyne Hughes who has helped lead the Tides offense was promoted to Baltimore.  The move is not official but according to the Orioles news site was posted on Hughes’ brothers Facebook page and confirmed by a source “close to the situation” on Saturday morning.  No corresponding roster moves have been announced by the O’s but the Orioles news speculates that relief pitcher Alberto Castillo, Shortstop Julio Lugo or reserve infielder Justin Turner.