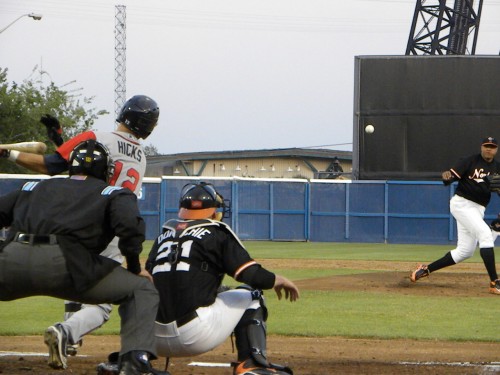 The Norfolk Tides went down to Georgia to open their series against the Gwinnett Braves in cool and windy weather under a cloudy night sky more reminiscent of Norfolk than suburban Atlanta in front of 2547 fans at Gwinnett County Coolray Field.  The Tides hoped to come off of a loss in the final game of their series against Charlotte on Monday to restart their recent winning streak against the Braves but that did not happen as the Braves defeated the Tides 7-2 behind the solid pitching of four Braves pitchers who allowed just 2 runs on 6 hits despite walking 7 Tides batters. 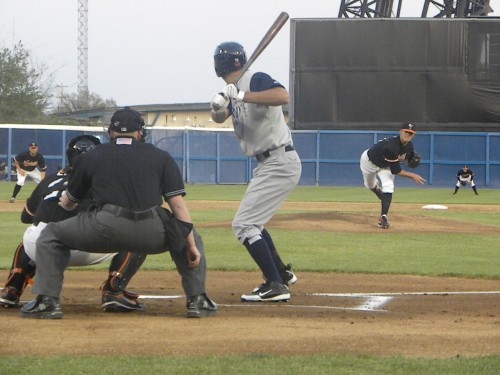 Brandon Erbe fell to 0-4 continuing to struggle at AAA

Tides starter Brandon Erbe went down to Georgia seeking his first win of the season but got in trouble early walking Matt Young to lead off the inning followed by a single to Gregor Blanco, another walk this time to Freddie Freeman and a bases loaded single to Brent Clevlen which drove in Young and Blanco.  He gave up a third run in the 2nd inning when Wes Timmons and J C Boscan both singled and Timmons was driven home by a sacrifice fly off the bat of Matt Young.

The Tides would get a run back in the top of the 4th inning when Josh Bell doubled on a sharp line drive to center and was advanced to third on a single by Scott Moore.  Braves catcher J C Boscan allowed a pitch by Braves starter Tim Gustafson to get by him giving Moore the chance to take second base. With two on and no outs Brandon Snyder grounded out to short scoring Bell.  The Tides mustered nothing else in the fourth as Corey Patterson flied to left and Justin Turner grounded into a Fielder’s Choice in which Moore was out at third. 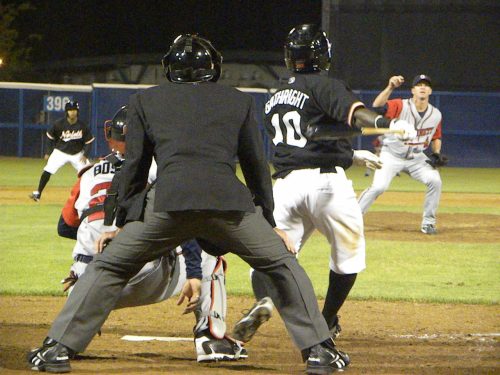 Joey Gathright went 2 for 4 with a double

The Braves took that run back in the bottom of the fourth as Brandon Erbe’s woes continued.  Erbe walked Brandon Hicks and Wes Timmons. J C Boscan dropped a perfect sacrifice bunt that Tides Catcher Adam Donachie fielded but who only had a play at first.  This advanced Hicks and Timmons and brought Matt Young to the plate.  Young hit a sacrifice fly to Left Fielder Joey Gathright scoring Hicks.  Erbe want to the showers when he gave up a walk to Gregor Blanco.  Chris George entered the game to get the final out.

In the top of the 5th the Tides got another run when Adam Donachie singled, Joey Gathright doubled and Robert Andino hit a sacrifice fly to right which scored Donachie.

With the score 4-2 and the Tides looking to get back into the game the Braves literally “stole” the game and put a stake in the heart of the Tides hopes for the night. Chris George who has been a solid middle reliever this year walked the first batter Brent Clevlen and then got Mitchell Jones looking.  George then walked Joe Thurston.  The Braves then pulled off a double steal which advanced Clevlen to third and Thurston to second.  George then got Brandon Hicks to strike out and intentionally walked Wes Timmons.  With the bases loaded J C Boscan hit a soft fly to right which fell for a hit and scored Clevlen and Thurston and advanced Timmons to third.  With Matt Young batting Wes Timmons did what is seldom done and on a double steal attempt stole home for the third run of the inning.

The game would finish with the Braves using three relievers beginning in the top of the 6th inning to shut down the Tides.  The Tides would make an 8th inning rally attempt which fell short with the bases loaded.  Ross Wolf came on for the Tides to pitch the 6th and 7th innings and Frank Mata closed out the game with neither pitcher allowing any Braves runs.  Braves pitching was adequate Tim Gustafson (1-1 6.75) got the win giving up 2 runs on 4 hits and two walks. Both teams committed an error.

For the Tides Joey Gathright went 2 for 4 with a double and a walk. Brandon Snyder and Jeff Salazar each had an RBI.  Brandon Erbe got the loss dropping to 0-4 on the season with an 8.35 ERA.  Brandon gave up 4 runs on 6 hits walking 5 in 3.2 innings work. Chris George (1-0 4.50) had his first bad outing of the year going only one and a third innings giving up 3 runs on 1 hit with two walks.  The story for the Tides was the inability to score runs. They left eleven men on base and had eleven in scoring position of which only one the Tides brought home.

Meanwhile at Camden Yards the Orioles got their first home win of the season as well as their first winning streak by defeating the Champion New York Yankees and their wrecking crew holding on to win 5-4.  It was a night where former Norfolk Tides shined to secure the win.   In the 6th inning Rhyne Hughes continued to shine beginning an Orioles rally with a RBI single, this was followed by one by Nolan Reimold and Cesar Izturis.  Recent Tides Alberto Castillo got the win and Alfredo Simon in his appearance as an Oriole got the save.  Tonight the Yankees send C C Sabathia against the Orioles Jeremy Guthrie.

We’ll see how the night goes.