Robert Andino Got his 6th home run of the year Monday

Brandon Erbe must be wondering what he needs to do to get a win and Armando Gabino making his second start for the Tides taking Chris Tillman’s spot in the rotation must be scratching his head as well.  This weekend each pitcher saw solid performances end in losses when the relief staff could not seal the deal.  For Erbe it looked like after a dismal start to the season when even his good performances could not get a win that he just might get a win in Pawtucket and this Padre was wondering why the Deity did not answer his prayers for Brandon to get the win.  For Gabino who has not delivered a bad performance to date the no-decision result had to be frustrating but most certainly not the frustration experienced by Erbe. On the other side of the coin Jake Arietta continues to win and lower his International League ERA even when he has almost no run support. 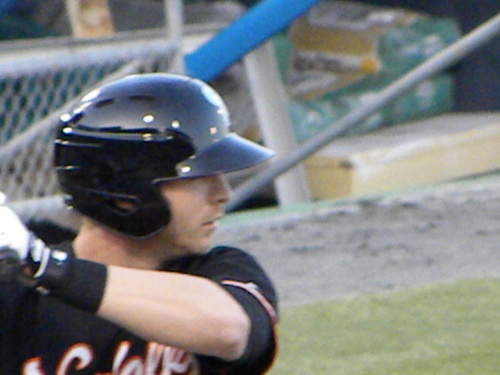 In Saturday’s game Erbe pitched 5.2 innings allowing no runs on 5 hits with 5 strikeouts and just one walk.  He left with a 2-0 lead and at first it looked like the bullpen just might hold things together when Pedro Viola got the final out of the 6th inning.  Viola got into trouble in the bottom of the 7th when Dusty Brown singled and was driven home on a double by Jorge Jimenez and Tug Hulett singled to send Jimenez to third. At this point since Viola has had a number of very rough outings Manager Gary Allenson pulled him for the usually reliable Ross Wolf. Unfortunately for the Tides this was not a good night for Wolf though not entirely of his making.  Wolf walked Angel Sanchez and then Daniel Nava hit into what looked to be a force at second but Blake Davis committed a fielding error allowing Nava on and Jimenez to score. Lars Anderson then doubled to score Hulett and Sanchez but Nava was thrown out on the relay by Josh Bell when he attempted to score. The inning ended with the Tides down 4-2 and Erbe’s chance at a win gone.  Tides hitters mustered nothing more and the game went into the bottom of the 8th with Andy Mitchell coming into the game. Mitchell who has been spot on in mid-relief lately gave up 3 runs on 4 hits leaving the Tides down 7-2.  In the 9th Brandon Snyder got a one out singled but was doubled up when Blake Davis hit into a double play to end the game.

Offensively the Tides had 2 runs on 8 hits and 2 errors leaving 6 men on base. Brandon Snyder, Josh Bell and Rhyne Hughes all having doubles and Blake Davis his first home run of the year, a solo shot in the 5th inning. The Pawsox had 7 runs on 13 hits all 7 runs and 8 of the hits came in the 7th and 8th innings against Tides relievers.  The Sox committed 2 errors and left 9 men on base.

Jake Arietta picket up his 6th win lowering his ERA to 1.77

On Sunday the Tides started Armando Gabino.  Gabino scattered 3 runs, 2 of which were earned on 4 hits striking out 6 and walking 3 in six innings work.  He allowed a first inning two run home run to Daniel Nava and a run in the bottom of the 6th when Lars Anderson doubled and scored on a Josh Reddick single. The Tides offense got a run in the 4th tying together an error which allowed Josh Bell on base with one out, a double by Nolan Reimold and a RBI ground ball by Brandon Snyder to score Bell. In the 5th inning the Tides tied the score when Matt Angle just up from AA Bowie bunted for a single and took second on a throwing error. Robert Andino flied out to deep center allowing Angle to take third. Rhyne Hughes then singled to score Angle.  The Tides would take the lead in the top of the 8th as the offense when a newly hot Nolan Reimold hit a 2 run home run.

Jim Miller replaced Gabino in the 7th and pitches a scoreless inning allowing a single and walk while striking out one batter.  Kam Mickolio came in to pitch the bottom of the 8th giving up 2 runs on 3 hits, walking 1 and striking out two. The Tides would fail to score in the 9th and Mickolio was handed the blown save and the loss, his second in the series against the Pawsox.

The Tides had 4 runs on 7 hits and 3 errors with 9 men left on base, the Pawsox 5 runs on 8 hits and 1 error with 8 runners left on base. Dustin Richardson (2-0 3.21) after blowing the save in the top frame of the 8th; got the win for Pawtucket and Fernando Cabrera got his 7th save.  Kam Mickolio had his third blown save of the season and his record dropped to 1 win and 2 losses with an ERZ of 9.42.

The Tides made the overnight bus ride to Rochester and the Tides pitching heated up with the weather on a warm western New York night with a game time temperature of 84 degrees Jake Arietta took the hill for the Tides and pitched yet another great game against the Rochester Red Wings.  This evening Arietta shut down the potent Red Wing attack allowing one run on 5 hits walking 2 and striking out 7 in 8 innings work. The one run came in the bottom of the 3rd inning when Matt Tolbert tripled to right and scored on a Jason Repko single but that would be all for the Wings.  Denis Sarfate came in to close the game and sent the Wings down in order in the bottom of the 9th. The Tides offense was generated in the bottom of the 7th when Josh Bell doubled and advanced to third on a ground out by Nolan Reimold. He then scored on wild pitch by Anthony Swarzak. In the top of the 8th Robert Andino hit his sixth home run of the season to make the score 2-1.

The Tides parent club the Baltimore Orioles dropped their fifth game in a row dropping their record to 15-36 with a .294 win percentage 18.5 games behind the American League East leading Tampa Bay Rays.