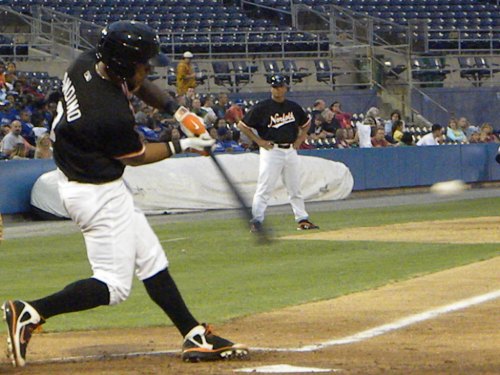 Well it wasn’t the prettiest win but Armando Gabino gutted out six innings against the Columbus Clippers at Huntington Field on Monday night to notch his fourth win of the season. Gabino showed a lot of fortitude after giving up a leadoff double in the 1st inning to Michael Brantley who scored on a Nick Weglarz single with one out. Gabino got out of that inning and gave up another run in the 2nd inning when Jared Goedert homered to left with 2 outs in the inning.  He gave up doubles in the 3rd, 4th and 6th innings but each time with the pressure on was able to work out of each jam against a very good hitting Clippers lineup. 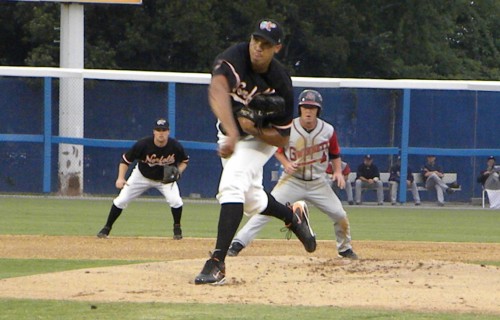 Armando Gabino picked up his 4th win of the 2010 season

The Tides bats came back to life and with the Tides down 1-0 in the top of the 2nd inning it was Third Baseman Josh Bell that tolled loudly for the Tides as he homered over the right field wall on a 1 and 2 count.  With the Tides down 2-1 in the top of the 4th inning Michael Aubrey doubled and was followed by Bell who also doubled to score Aubrey.  Bell came home on a Nolan Reimold single to give the Tides the lead at 3-2 and on Monday they would not fall behind again. The Tides added to their lead in the 5th inning when Michel Hernandez led off with a single and advanced to second on a sacrifice bunt by Blake Davis. Matt Angle flied out to deep right which allowed Hernandez to take third base.  Robert Andino came to the plate with two outs and Andino who has been a RBI machine of late singled to score Hernandez to make the lead 4-3 providing the insurance that the Tides would need to seal the deal. 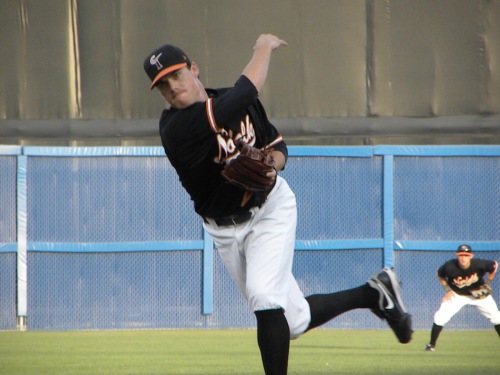 Andy Mitchell came into the game in the top of the 7th inning to make his third appearance in three games against the Clippers.  Mitchell struck out Jared Goedert but then gave up consecutive singles to Cord Phelps and Michael Brantley placing runners on first and second with one out.  Seeking a double play ball it appeared that Mitchell would get it when Josh Rodriguez hit the ball back to Mitchell who had trouble with it and then threw wide to second pulling Blake Davis off the bag and loading the bases. With Davis arguing the call at second and Mitchell preparing to join in Tides Manager Bobby Dickerson  came to the mound and helped calm down the normally unflappable Mitchell who then pitched out of the jam getting Nick Weglarz to ground out scoring Phelps and then getting Matt LaPorta to ground out on a 3-1 count. 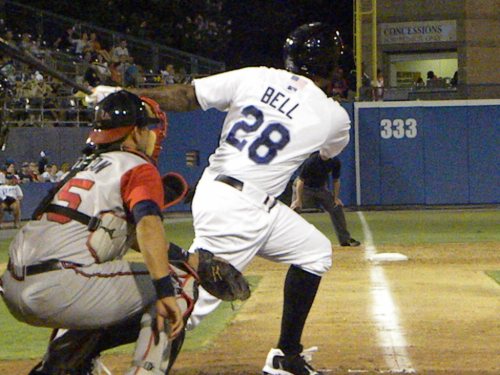 With the Tides now leading 4-3 Denis Sarfate came in for a 2 out save attempt.  Sarfate who had 7 saves going into the night allowed a single to Jordan Brown but got Wes Hodges on a double play when he attempted to bunt sacrifice Brown to second.  Sarfate then struck out Lou Marson to end the inning.

In the top of the 9th the Tides offense struck again and once more Robert Andino would be in the mix. Brandon Snyder led off the inning sending a 1-0 pitch by reliever Joe Smith into center field for a single. Michel Hernandez reached on a force attempt on a throwing error by First Baseman Jordan Brown.  Blake Davis sacrificed bunted to advance Snyder to third and Hernandez to second. Smith then intentionally walked Matt Angle to load the bases hoping to create conditions for a double play.  This was not to be as Smith had to face the clutch hitting Robert Andino who on the first pitch singled to left field scoring both Snyder and Hernandez to make the lead 6-3.

Sarfate then faced the Clippers in the bottom of the 9th.  He struck out Jared Goedert for the first out but then walked Cord Phelps.  However the glimmer of hope given to the Clippers was short lived when on a 0-2 count Sarfate got Michael Brantley to ground into a four-six-three double play to end the inning and the game.

The Tides had 6 runs on 10 hits and 2 errors leaving seven runners on base while the Clippers had 3 runs on 9 hits and no errors also stranding seven.  Armando Gabino (4-0 2.62 ERA) got the win for the Tides and Sarfate got his 8th save.  The loss went to Clippers starter Carlos Carrasco (5-3 4.22ERA). Today the teams conclude the series with Tim Bascom (0-1 3.86) making his second AAA appearance for the Tides going up against Jeanmar Gomez (3-7 6.96 ERA).  In San Fransisco former Tides starter Chris Tillman was manhandled by the Giants as the Orioles lost to the Giants 10-2 in interleague play.  The Orioles have lost 17 of their last 18 games with the only win coming on the arm of recently promoted Jake Arietta.

Tides Clipped by Clippers 6-2 and 5-4 in Columbus 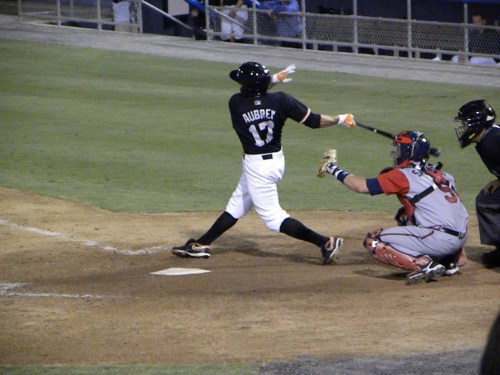 After taking 3 of 4 from the Gwinnett Braves at home the Norfolk Tides began their first excursion to visit the teams of the Western Division of the International League. They began the trip in Columbus on Saturday  where the Tides faced the Columbus Clippers the AAA affiliate of the Cleveland Indians who like their parent club are hard hitting team and have the second highest team batting average (.283) in the International League at Huntington Field. 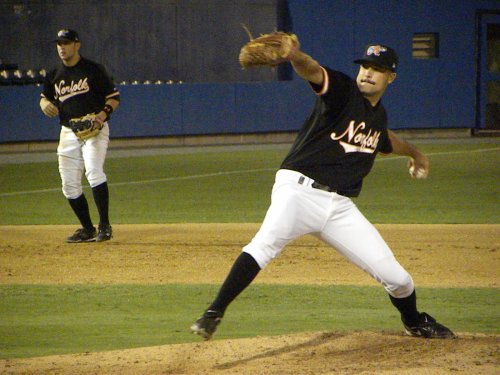 Despite this the Tides and Clippers have not see the kind of fireworks that dominated the first part of the Tides home stand.  On Saturday Troy Patton got the start and pitched 4.1 innings giving up 1 run on 3 hits with 5 strikeouts before being pulled for Mike Hinckley.  Hinckley struggled giving up 3 runs on 2 hits and two walks in one inning.  The Clippers added two more runs off Jim Miller who gave up those runs on 3 hits in the bottom of the 7th inning.

The Tides led the game early on 3rd inning home runs by Michael Aubrey and Blake Davis but the game slipped away in the 6th and 7th innings.  Andy Mitchell entered the game in the 8th inning and sent the Clippers down in order but the damage was done and the Tides fell to the Clippers by a score of 6-2 on Saturday evening.  The Tides had 2 runs on 5 hits and gave up no errors stranding 2.  The Clippers had 6 runs on 8 hits and 2 errors leaving 6 men on base.  Justin Germano (2-1 3.46) got the win in relief for the Clippers and Mike Hinckley (0-2 9.64) took the loss for the Tides.

On Sunday the Tides and Clippers played into extra innings.  Brandon Erbe started for the Tides still seeking his first AAA win for the Tides.  Brandon has been pitching well as of late getting the game into the middle to late innings but not getting the win due to errors or blown saves.  Sunday was little different. Erbe sent the first 15 Clippers that he faced down in order before giving up back to back home runs in the bottom of the 6th.  Andy Mitchell relieved Erbe and stopped the Clippers. 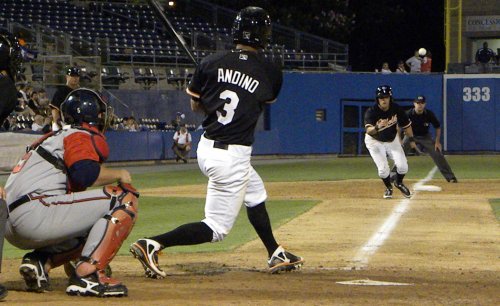 The Tides bats were not idle. In the 3nd inning Matt Angle walked and Robert Andino singled him to third base advancing to second on an errant throw and Angle scored on a ground ball by Rhyne Hughes.  In the 5th they scored again.  Michel Hernandez singled and advanced to second on a sacrifice bunt by Paco Figueroa.  Matt Angle then singled and sent Hernandez to 3rd.  Robert Andino grounded into a force out scoring Hernandez for the 2nd run.  In the top of the 6th the Tides scored a third run to give Erbe a 3-0 lead when Josh Bell and Nolan Reimold got aboard on walks and Bell scored on a sacrifice fly by Michel Hernandez.

The Tides surrendered the lead in the 7th inning with Cla Meredith on the hill in relief of Mitchell.  Meredith gave up 2 runs after loading the bases with one out.  He would get only two Clippers out and Ross Wolf came in to close out the inning but not before the damage had been done.  Meredith has not been impressive since being optioned to Norfolk and he gave up 2 runs on 2 hits and 3 walks raising his ERA to a whopping 16.88.  Wolf would pitch the Tides through the 8th and 9th innings as well allowing only a walk in 2.1 innings work lowering his ERA to 2.17.

The Tides tied the game in the top of the 9th.  Paco Figueroa singled but was out at second on a force out by Matt Angle.  Angle then was put out on a force out at second on a ground ball by Robert Andino.  This put the Tides down 4-3 with 2 outs in the bottom of the 9th. Rhyne Hughes then reached on a fielding error and Andino advanced to second.  This brought up Josh Bell who singled scoring Andino to tie the game. 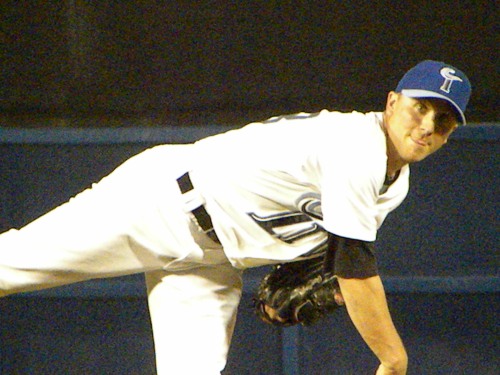 With Wolf holding the Clippers tight in the bottom of the 9th the game went into extra innings.  The Paco Figueroa singled with 2 outs but was erased on a force out by Matt Angle.  Mike Hinckley came into the game in the 10th to relieve Wolf who as I said has shut down the Clippers from the 7th inning on.  Jose Constanza got a base hit bunt and advanced to second on a sacrifice bunt by Michael Brantley.  Brian Brixler flied out to right fielder Rhyne Hughes for the 2nd out.  Hinckley then hit Nick Weglarz with a pitch and gave up a walk off single to Matt LaPorta which scored Costanza to end the game.

Norfolk produced 4 runs on 11 hits with 1 error left 12 men on base.  The Clippers had 5 runs on 7 hits and no errors but benefited on getting three walks by Cla Meredith which gave Columbus the lead in the 7th inning and the hit batsman by Hinckley in the 10th.  They left 5 men on base.  Carlton Smith (1-0 6.43) got the win in relief for the Clippers while Hinckley took his second consecutive loss bring his record to 0-3 with a 10.13 ERA since coming up from Bowie.

The Tides and Clippers play tonight in Columbus with Armando Gabino (2-0 2.56) facing Carlos Carrasco (5-2 4.12) on the hill for the Clippers.

On the personnel front the Orioles optioned Brad Bergeson to Norfolk, his second trip down of his troubled season and the Tides placed Kam Mickolio on the 7 Day Disabled List with a strained right shoulder.  I had noticed that in his last two appearances despite pitching well that Kam left one game and been talked to by Bobby Dickerson on the mound in an appearance when he was shutting down Gwinnett.

In other notes Andy Mitchell has appeared in the first two games allowing no runs or hits in either appearance.  Robert Andino now has 36 RBIs on the season to lead the team.