So God gets the Blame for Dropped Passes….the Prosperity Gospel strikes again

Padre Steve’s Disclaimer: This post deals in a humorous manner with the Tweet of Buffalo Bills Wide Receiver Steve Johnson.  His tweet is a foil for a bigger point about the “prosperity Gospel” and the distorted view of God of those that teach it and their unfortunate victims.  I am sure that he is a sincere young man who was very emotional after dropping a pass. I wish him well and he will let up on himself and God. Peace, Padre Steve+

Well, well isn’t this special. Buffalo Bills receiver Steve Johnson dropped an easy pass that would have won the game for the Bills and stunned the Pittsburgh Steelers. After the game at the Bills press conference the young man was up in front of the reporters taking responsibility like a man all but offering to commit Hari-Kari to atone for his sin against his team which cost them the game.  I saw the interview on ESPN and heard it on the radio and I thought that while I liked the fact that he owned up to blowing the play that it sounded a bit overdone and even a bit histrionic if you asked me.  Lucky for Johnson and quickly recovered his composure and realized that God had thrown him under the bus. I mean he had obviously done all the right things to make God happy except to play for the Cowboys who in addition to claiming to be America’s team have also conjured up the image of being the Deity’s team but I digress.  You have to look at what the young man said in the context of his Twitter account:

The “I PRAISE YOU 24/7!!!!!! AND THIS IS HOW YOU DO ME!!!!!” is a little strong if you ask me. How anyone finds time to praise God 24/7 is beyond me and I would assume that he means “a lot” and not a literal 24/7 Praise-a-Thon.  I’m sure that since he used so many exclamation points that he lost the chance to remind God about his tithes, vows and other offerings in the tweet, alas the limitations of Twitter.

You see it is obvious to me that God had to let him down. He’s playing for a bad team getting whacked around by opposing defenses and all the while praising God and giving until it hurts. Let’s face it anyone knows if you take the time to watch or listen to much of what passes of “Christian teaching” on almost any “Christian” television network you know that the young man speaks the truth. He praised, prayed and gave and what did he get for his trouble? I’ll tell you what he got, he got the shaft and he should sue.  He should go for God’s big pockets.

Look at this, I mean if you listened to some of the guys that really are tight with God you would do the same thing as Johnson, and if you do listen to God’s anointed you would probably do the same thing in Johnson’s situation.  I mean these guys are called anointed, apostles, prophets and even “God’s Generals” so they can be trusted right? 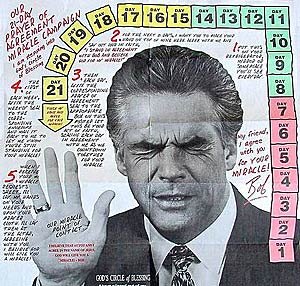 I mean I have seen some of them actually getting messages from God on camera with the whole constipated look while they are struggling to hear exactly what God is saying because the Old Testament talks about the severe penalties for getting God wrong.  With that kind of accuracy and authority it is no wonder that people fall all over themselves to give to these ministers and their ministries.  Seriously the basic message of the “health, wealth and success” prosperity preacher in its crudest form is that if you give you get.  If you do things like praise God, something that certainly a good thing for us to do and give of your time talent and treasure, especially the treasure part that God is obligated to give back to you. The Prosperity preachers love to quote Scripture but only in regard to people giving to them and their ministries, they just love Luke 6:38 “Give, and you will receive. Your gift will return to you in full–pressed down, shaken together to make room for more, running over, and poured into your lap. The amount you give will determine the amount you get back.” Can I get an Amen? No of course if you look at all the troublesome verses around this gem the context is not how it is presented by the prosperity crowd.  The passage is Jesus giving a lecture about the Christian life to include humility, forgiveness, judgment and even hypocrisy and the giving is just one part of it and certainly if you look a the broader context of Scripture regarding material prosperity generally talks about it as an encumbrance that often leads to sin, excess and even presumption on God denying the very way of the Cross.

So you get my drift, what Steve Johnson did is no different than the person that gets upset at God when they didn’t get a promotion, or get something that they really wanted and even prayed for, and all of us including yours truly have had meltdowns where we have words with God.  However the problems arise when we presume that because we do something good that God is obligated to return the favor like God is some sort of cosmic ATM. With the proliferation of the prosperity teaching on television, in mega-churches and on the internet we have seen a cultural shift in how the Christian faith is presented in often very narcissistic ways.

So my best to Steve Johnson and I do hope and pray that a more mature Christian in his circle of trust will pull him aside and help him. These things happen and once you “tweet” or hit the send button on your e-mail or text you can’t take it back.  Live and learn, it’s hard to be a rookie on Twitter, maybe the NFL should keep rookies off of Twitter until they can learn not to look stupid using it.

Have fun and God bless,