The Road to Totalitarianism is paved with Good Intentions

“They that can give up essential liberty to obtain a little safety deserve neither liberty nor safety.” Benjamin Franklin 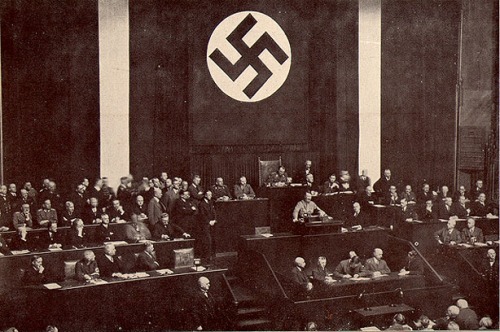 Sometimes in crisis nations enact laws that in the heat of the moment sound quite good. In fact the writers of such laws usually don’t have bad intentions, they react to a crisis enact laws to safeguard society from the events of the crisis which usually included widespread political, social and economic disruption.  In 1919 with the country engulfed in economic, social, political crisis that had evolved into what amounted to a civil war Germany added an article to the Weimar Constitution.  That article was Article 48 and read as follows:

If public safety and order in Germany are materially disturbed or endangered, the President may take the necessary measures to restore public safety and order, and, if necessary, to intervene with the help of the armed forces. To this end he may temporarily suspend, in whole or in part, the fundamental rights established in Articles 114, 115, 117, 118, 123, 124, and 153

During the turbulent history of Weimar Article 48 was used by the Socialist President Friedrich Ebert who had to guide the country through the collapse of the monarchy, the humiliation of Versailles, the period of hyperinflation as well as an attempted takeover by those who wanted to implement a Soviet government as well coup attempts from the political right.  After Ebert’s death in 1925 Field Marshal Paul von Hindenburg was elected President and during the economic, political and social crisis brought about by the Great Depression invested the conservative Chancellor Heinrich Brüning with the powers of Article 48, something that he also granted to Brüning’s successors Franz von Papen, Kurt von Schleicher and Adolf Hitler.

Under Hitler it was invoked after the burning of the Reichstag, the German Parliament building an event which was very likely executed by the Nazis themselves while blaming the Communists.  It was issued in the following manner:

ARTICLE 1. In virtue of paragraph 2, article 48, of the German Constitution, the following is decreed as a defensive measure against communist acts of violence, endangering the state:

Sections 114, 115, 117, 118, 123, 124, and 153 of the Constitution of the German Reich are suspended until further notice. Thus, restrictions on personal liberty [114], on the right of free expression of opinion, including freedom of the press [118], on the right of assembly and the right of association [124], and violations of the privacy of postal, telegraphic, and telephonic communications [117], and warrants for house-searches [115], orders for confiscation as well as restrictions on property [153], are also permissible beyond the legal limits otherwise prescribed.

Following this the Reichstag passed a law called the Enabling Act. This law gave the President unlimited power which Hindenburg ceded to Hitler.  When Hindenburg died in 1934 the offices of President and Chancellor were merged in the person of Adolf Hitler. This is the text of the Enabling Act legislation:

The Reichstag [the lower house of parliament] has passed the following law, which is, with the approval of the Reichsrat [the upper house], herewith promulgated, after it has been established that it satisfies the requirements for legislation altering the Constitution.

ARTICLE 1. In addition to the procedure for the passage of legislation outlined in the Constitution, the Reich Cabinet is also authorized to enact Laws referred to by Articles 85 Paragraph 2 and Article 87 of the constitution. (Article 85 outlined the process by which the Reichstag and Reichsrat approved the Reich budget. Article 87 restricted government borrowing.)

ARTICLE 2. The national laws enacted by the Reich Cabinet may deviate from the Constitution provided they do not affect the position of the Reichstag (low house of Parliament) and the Reichsrat (the Upper House). The powers of the President remain unaffected.

ARTICLE 3. The national laws enacted by the Reich Cabinet shall be prepared by the Chancellor and published in the official gazette. They come into effect, unless otherwise specified, upon the day following their publication unless they prescribe a different date. Articles 68 to 77 of the Constitution do not apply to laws enacted by the Reich government. (Articles 68 to 77 stipulated the procedures for enacting legislation in the Reichstag.)

ARTICLE 4. Treaties of the Reich with foreign states which concern matters of domestic legislation do not require the consent of the bodies participating in legislation. The Reich Cabinet is empowered to issue the necessary provisions for the implementing of these treaties.

ARTICLE 5. This law comes into effect on the day of its publication. It ceases to be valid on 1 April 1937 or if the present Reich government is replaced by another.

The Enabling Act was passed by a majority of the Reichstag by a vote of 441 to 96. The Communists had been banned and had no representation, the center and right cast aside their reservations and voted for it and only the Socialists led by their Chief Otto Wels voted against it.  For their trouble most of the Socialist deputies would be imprisoned, go into concentration camps or have to flee the country.

Some leaders of religious groups that initially supported the Nazis rapidly discovered that they had made a deal with the Devil. As Martin Niemöller said:

They came first for the Communists,
and I didn’t speak up because I wasn’t a Communist.

Then they came for the Jews,
and I didn’t speak up because I wasn’t a Jew.

Then they came for me
and by that time no one was left to speak up. .

In times of crisis people seek security and stability and are often willing to sacrifice constitutional liberties to do so.  Unfortunately when a people and nation willing abrogate their constitutional rights and protections by legislative action or executive order in the name of security and safety they ensure that they will lose all. The German political parties that voted in favor of the Enabling Act included cultural and religious conservatives.  Most of these people feared a potential Communist takeover and continued political and economic instability more than surrendering their rights and freedoms.

Unfortunately it is my belief as well as that of many civil libertarians on both sides of the political divide that we have set the stage in this country for a totalitarian state.  Our legislature passes massive bills which none have read that are so Byzantine that no one can understand them which often give nearly unchecked power to unelected bureaucrats in government agencies and often serve to grant more power to the Executive Branch at the expense of Congress, the Courts and State governments.  Such legislation passed under conditions where people believe a crisis exists includes the Patriot Act of 2001, the Intelligence Reform and Terrorism Protection Act of 2004, the Emergency Economic Stabilization Act of 2008 the Troubled Asset Relief Program (TARP) of 2008 and the Patient Protection and Affordable Care Act (PPACA) of 2010.  Most of the people that voted for these laws certainly believed that they were doing the right thing, but all contain provisions that give unelected and unaccountable bureaucrats unheard of power over the daily lives of Americans and contain provisions that sacrifice individual rights and liberties. There are numerous other examples which in conjunction with Presidential Executive Orders and Directives, some public and many secret that provide the Executive Branch willing to use them almost unbridled power.  Under normal conditions no President would attempt take full advantage of such powers nor would most people accept such a power grab, but history shows that under emergency or crisis conditions people and legislatures willingly surrender liberty for supposed security.

In Weimar Germany the catalyst was the fear of Communist takeover in the midst of economic crisis that created the conditions by which non-Nazi citizens and political parties surrendered their liberties. In the wake of the attacks of September 11th 2001, continued terrorist threats, two wars, economic crisis, the collapse of the housing market and the ineffectiveness of government leaders at the Federal and State levels the United States in a place where many people may accept an authoritarian or totalitarian regime so long as we are safe and the economy gets back on track.  Instead of a Communist threat we have a Muslim extremist terrorist threat. Instead of the Great Depression we have a world economy on the brink of collapse. People are fearful; millions are going bankrupt or losing their homes and jobs and more seem to be willing to surrender freedom just to be safe and have some semblance of an orderly society again.  You really can’t blame people for wanting a return to an America where it is safe and the economy is doing well there is nothing evil in that desire. Unfortunately history shows that there are those that will exploit people’s fears and longings to gain unbridled power and once they have it will stop at nothing to keep it.

In 1933 the German people surrendered their rights and freedoms for the promise of safety, security, economic recovery and a return to national greatness.  The question that I have to ask is will the people of the United States of America do the same in the next few years?  I think the answer is obvious.  It will only take a successful terror attack on the United States Homeland, an economic collapse or a government shutdown to force the issue. People will demand results and will welcome whoever can deliver those results.  We have already shown what people will accept in order to travel by commercial air and from that it is but a small step to accepting such measures in the rest of life.  Get ready folks it will be a joy.