The big battalions get the press but in counter-insurgency operations in a very unstable environment such as Afghanistan the most perilous duty is often done by advisors.  Having served with our Marine and Army in Iraq in 2007 and 2008 I can say without equivocation that the advisors that serve with the Border and Port of Entry Police, as well as Police Training Team personnel serve in some of the most perilous and exposed locations imaginable usually far from quick support of combat units.

With an Iraqi Border Team

The Border teams typically cover large sectors and are composed of 15-20 personnel with a Captain or Major in command of the team and a number of junior officers or Staff Non-Commissioned Officers and junior enlisted personnel sometimes augmented by U.S. Border Patrol and Customs agents or contractors retired from those organizations.  They are not heavily armed and usually are based with the indigenous security forces.  Travelling in HUMMVS they visit and work with the indigenous Border Police and Port of Entry Police along long borders constantly exposed to possible ambush by insurgents or being attacked by the very personnel that they train and support.  This happens more frequently than we would want to see. 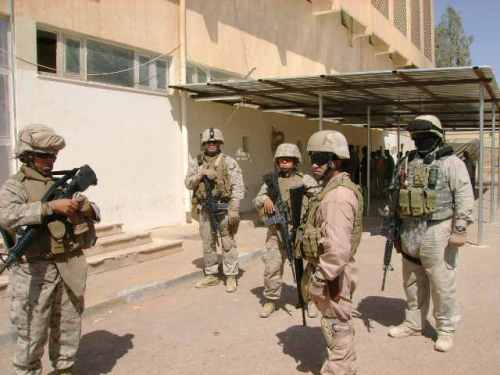 A Port of Entry Team after finishing an assistance visit at the Al Waleed Port of Entry. That evening the team went out and intercepted arms, drugs and money bound for Iraqi insurgents

The most recent case of this happened Monday the 29th when an Afghani Border Patrol Officer opened fire during a training mission Monday in the Pachir Wagam district of Nangarhar province near the border with Pakistan. The gunman was also killed during the incident according to NATO and Zemeri Bashary, a spokesman for the Afghan Interior Ministry, said the gunman was indeed a border police officer, and not an insurgent wearing a uniform. The Taliban claimed that the man was a Taliban member who had joined the Border Police to “kill foreign soldiers.” This has been a recurrent theme in the world of Afghanistan’s security forces, more so Police and Border forces than Army but a danger that grows as Afghanistan and NATO seek to quickly bolster the numbers of troops in the Afghan security forces.

The attack was the latest in a series against advisors by their Afghani charges. In July, a rogue Afghan soldier fired a rocket-propelled grenade on NATO troops, killing three British soldiers and wounding four others.  In November 2009, an Afghan policeman killed five British soldiers at a checkpoint in Helmand. A month earlier, an Afghan policeman on patrol with U.S. soldiers fired on the Americans, killing two.

These Marines and Soldiers do not deploy for the most part with their own units, they deploy with their team and much of the time return to another assignment after their deployments separate from their comrades with whom they served in harm’s way.

I have been there in Iraq and involved with some very tense situations at Waleed as well as the border. The men that serve on these teams in Afghanistan are always on my mind and in my prayers.

On Monday the United States lost six brave soldiers on Afghanistan’s eastern border.  Please pray for the surviving members of this team which has been decimated by the attack as well as the families of the fallen.