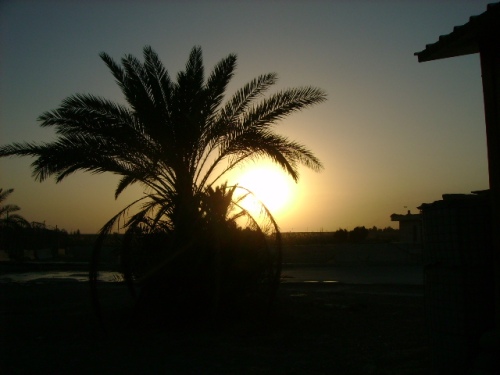 “Ministry means the ongoing attempt to put one’s own search for God, with all the moments of pain and joy, despair and hope, at the disposal of those who want to join this search but do not know how.”  — Henri J.M. Nouwen

Those readers and friends that have walked with me over the past two years on this site as well as those that walked with me before I ever put pen to my thoughts know how much I have struggled with God and faith since my return from Iraq. Easter has been difficult during that time as was Christmas.  My journey has been marked by many doubts. Today was different. Today we observed a quiet Easter out at the Island Hermitage marked by solitude and community.

The day was quiet and uneventful. I have been writing of late on the Easter story as told by Longinus the Centurion who Church tradition accords the honor of being the Centurion who remarked at the foot of the cross “truly this man was the son of God.”  The Centurions of the Bible have always been models for me as a Christian because they were career military men who served a far flung empire and at in least one part of their careers served in an unpopular occupation of a subjugated land with a proud and unbroken populace.  In their case it was Judea of the First Century and mine was Iraq. The story of Longinus as he is known to Church tradition is one that has fascinated me, a gentile officer of an occupying army discovers God at the scene of a brutal execution which he himself supervised. The story has helped me as I imagined what it must have been like for a Roman Centurion serving in a troubled land ruled by a cabal of corrupt politicians representing Rome, the family of Herod and the powerful institution of the Jewish Temple leadership composed of the High Priest, the ruling Sanhedrin and various religious parties. Likewise the lad featured an undying insurgency dedicated to overthrowing the Romans and what some considered the corrupt administration of the High Priest who they believed to be a collaborator with the Roman occupiers. These were the Zealots.  I was fascinated by the story and the story led me to a deeper appreciation of the Easter story.

We had contemplated going to Camp LeJeune to Mass at the Base Chapel. My friend Father Jose is a wonderful pastor and serves as the base Catholic Chaplain. While it would have been nice to see him celebrate the liturgy it meant that we would do so as strangers in a large community of faith.  Judy and I still both struggle with large gatherings especially where we know very few people and decided that we would celebrate Eucharist together. We were joined in this by my land lady Sharon.  It was a quiet but joyful expression of faith and community where each of us has at times suffered under sometimes cold and unfeeling Church institutions and leaders.

I used the story of Longinus as my homily telling the story in story form rather than as a theological treatise or sermon.  After the homily we confessed the faith of the Nicene Creed, prayed for the church and the world especially the outcast and persecuted and celebrated the Eucharist around my small pine dining room table, which is actually in my living room which doubles a my bedroom. The Island Hermitage is not a mansion.

Later in the day Judy and I would take our little dog Molly on a walk through a park not far from here. The park is a woodland and wetland area on the Bogue Sound side of the island. To walk in those peaceful woods hearing, seeing and listening to the sights and sounds of nature was wonderful. Molly especially loved it as she hunted for some of the deer that she had seen a few days before while walking near the hermitage.  Following that we drove the 2 ½ miles to lands end with Molly’s ears and fur flapping in the breeze as she stood on Judy’s lap with her head and shoulders hanging out the door.  The evening was also quiet as I finished the Easter installment of the Longinus story and Judy made a number of bracelets from her seemingly unending supply of bracelet stuff.

About an hour ago I took Molly on a walk to do her nightly constitutional and as we walked in the dark I looked up into the clear night sky to see thousands of stars.  In 2008 I walked home from church on Christmas Eve looking up into the cold winter night sky wondering if God even existed.  Tonight I looked at the sky and uttered a simple thank you for the resurrection. I know that I believe again. The belief that became real again in 2009 during my “Christmas Miracle” while on duty at the Naval Medical Center is now a quiet and real part of my life and ministry, especially to those who have lost their faith or struggle with faith. It is a quiet alleluia that is now a part of my life again. It is not the same as what I had before and certainly some critics including some in my old denomination have labeled me a liberal, a heretic and even an apostate mostly because I do not agree with their political agenda or narrow and often undemocratic understanding of the Gospel and its social ramifications.  I suppose that should bother me but it no longer does. My skin has become more resistant to such critics and while such criticism from people that I counted as friends still stings in general I am much more resilient to it, obviously the Holy Spirit’s work in the life of this miscreant priest.

Yet I remain a Christian and an Old Catholic and treasure the gift that God has given us in Christ.  The ministry that I have now is different but it is founded upon that faith that people like Longinus discovered that first Easter and I can only say “I believe alleluia!”