Sinking the Costa Concordia: A Lesson in Hubris and Cowardice 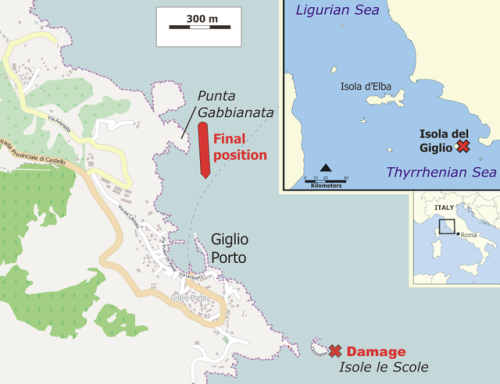 “You go up that ladder and get on board the ship. You go on board and you then tell me how many people there are. Is this clear? I am recording this conversation, Commander Schettino.” Commander Di Falco, coastguard

Captain Francesco Schettino acted with hubris and demonstrated cowardice in the sinking of his ship the Costa Concordia.  He has denied taking his ship the massive 114,500 ton Costa Concordia too close to to the island of Giglio but evidence is showing that this is a bold faced lie.  From the what we know now the ship passed too close to a rocky outcropping under 300 meters from the main island but much closer to a smaller rocky island just offshore. The ship based on its AIS tracking system was sailing at about 15.3 knots when she struck the rock on her port quarter at 2137 local time. 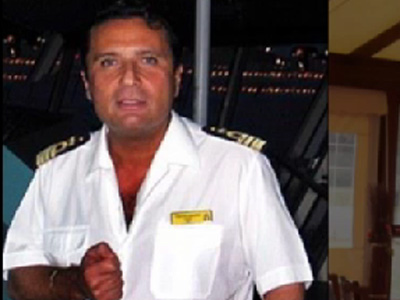 Damage was massive and within moments of impact the ship suffered a power outage but evidently still had some power and Schettino or one of his officers attempted to turn the ship toward Giglio harbor, presumably to get her into shallow water so she would not go down in deep water.  Investigators have found the exact point of impact with the rocks off the Le Scole Shoal (42° 21′ 20″ N, 10° 55′ 50″ E)

If you look at the track charts and diagrams it is easy to see how short of distance the ill fated liner travelled before sinking. She struck the rocks and turned slightly to starboard as she rapidly listed 20 degrees to port. The track shows that Casta Concordia slowed and turned rapidly to port (left) and slowed to a near standstill in the space of about 1000 meters as she lost power as Captain Schettino attempted to get her closer inshore.

The visible damage shows a massive gash of about 150 feet in her port side beginning just aft of midships to her port quarter.  The extent of the damage indicated that her double bottom was pierced and that numerous watertight compartments were breached including her main engineering spaces. The power failure experienced by the ship was most likely due to the flooding in the engineering spaces which powered its electrical generators. 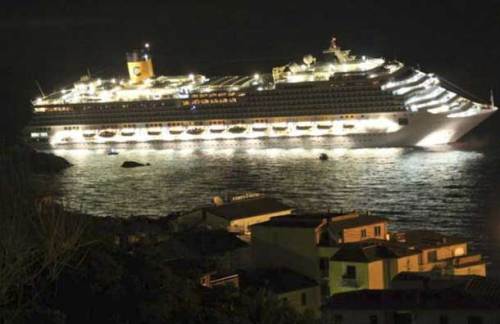 The damage itself was catastrophic and probably mortal, but when she turned to sharply to port she heeled back to starboard as the ship’s center of gravity shift and water in the flooded compartments shifted to starboard.  At 2145 the Chief Engineer informed the captain that the breach could not be repaired and was impossible to manage. Schettino should have ordered the ship abandoned at that moment but waited until 2258 to sound the alarm.   The rapidity with which the ship heeled to starboard could have also been affected by winds and the ship’s proximity to shore.  It is also possible that the very design of such large ships can make them vulnerable to such damage in that with such high superstructures they could be more prone to instability when flooding rapidly.

Concordia rolled over on her starboard side on the rocks off of Point del Lazzaretto eventually settling to the bottom at an 80 degree list. 11 people are known to have died and many more are still missing with hope fading for their rescue.

The situation is made worse by the actions of the Captain of the Concordia, Captain Schettino.  First based on the evidence of previous sailings that this is not the first time that Schettino took the ship close inshore. Apparently he did this to allow show off the ship to the relatives of the Maitre d’hotel of the ship to see the ship pass close to the island. Another report said that Schettino called a former commander now retired who lives on Giglio to let him know that he was coming close to the island.  The fact is that taking a ship the size of Costa Concordia so close to a rocky shore at night for the purpose of showing off is reckless endangerment and an act of hubris.

The second concern is the fact that Schettino abandoned ship and despite repeated orders from a Italian Coast Guard officer to return to the ship did not and that junior officers on their own initiative began to evacuate the ship well before Schettino gave the official order to abandon.

see transcript of the exchange between Schettino and the Coast Guard Officer here http://news.sky.com/home/world-news/article/16150968

After his rescue Schettino claimed that the rock was uncharted and that he was farther out to sea than he actually was.  The fact that Schettino and his First Officer abandoned ship while hundreds of not thousands of passengers were still in danger and refused orders to return to the ship shows cowardice.

The will be more on this but Captain Schettino bears the ultimate responsibility for what happened to his ship and the loss of life.

3 responses to “Sinking the Costa Concordia: A Lesson in Hubris and Cowardice”