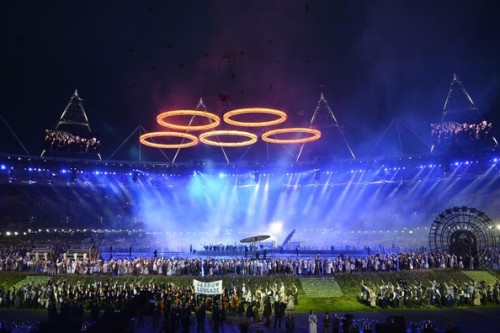 It was quintessentially and quirkily British, and quite a show that director Danny Boyle produced to begin the XXXth Olympiad in London. It was a show that many wondered about considering the lavish display of nationalistic pride put on by China in the 2008 Games.

The British production was a display of how a nation can respect its heritage while at the same time have enough wit to laugh at itself. Maybe that is a result of having been the world’s largest empire a century ago to being a rather modest power today. Britain may no longer have empire, but it does have a rich tradition and great history that was displayed in the show.

Music was a big part of the show and the influence of music of British music has been very large in the spread of western culture and influence. The opening song “Jerusalem” the lyrics of which come from William Blake is the unofficial hymn of England has a connection with the legendary Glastonbury Tor which was recreated in the stadium. Other songs from ancient to modern including folk songs like Danny Boy, hymnody, rock and pop were featured with Sir Paul McCartney closing the ceremony with his Beatles hit Hey Jude. 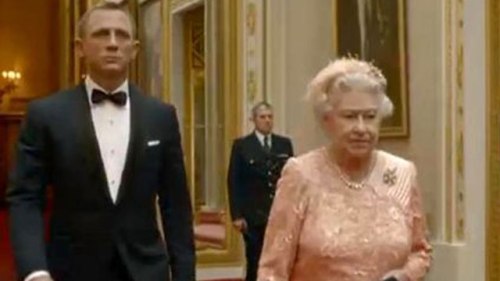 As for me I appreciated the humor, or as the British call it humour. It was refreshing to be able to see a great people be able to celebrate greatness but also have the ability to laugh at themselves. I think that the biggest highlights for me was the entrance of Queen Elizabeth II with Daniel Craig, the current James Bond. It showed that even the Queen has a sense of humour as she took part in a skit with Craig that featured her Corgi dogs, a slick helicopter and a stuntman dressed as the Queen parachuting into the stadium. It was a scene that probably she will be remembered by long after she passes from this life.

But even more fun was the appearance of Rowan Atkinson who reprised his Mr Bean type character. As a member of the orchestra who bored with his part the continuous tapping of the same note, daydreams about being in a scene from the film Chariots of Fire.  Of course as so many of his characters do and wins the race by cheating.  I can appreciate the honesty.

I was kind of bored by the tribute to the National Heath Service, not because I am a critic of the NHS, but it seemed to drag in comparison to other parts of the program despite the appearance of a flock of Mary Poppins ladies sailing in to chase off the villains of British Children’s literature.  However that being said it is important to note that the British are very proud of their health system despite the critics on this side of the pond, and the system is linked forever to J.M. Barrie, the author of Peter Pan who designated the Great Ormond Street Hospital as the beneficiary of the royalties from Peter Pan.

One thing that I find interesting about the British is that when times are bad they still can find humour in the situation. The British economy is suffering at the present time and there are many problems in the country. But there is something in the British character that helps them get through hard times and will again.

I will occasionally post something about these Olympics. As always there will be controversy, but hopefully whatever controversy emerges in these games will not detract from the excellence of the athletes that compete.

Filed under music, News and current events, sports and life