God’s Unfathomable Love: The Antidote to the False God of Christian Dominionism 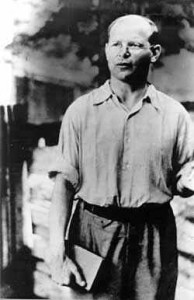 I find much inspiration from the past, especially in the lives of men and women who opposed evil, especially evil done by those who perverted the Christian message. One who always challenges and inspires me is the German martyr Dietrich Bonhoeffer.

Dietrich Bonhoeffer grew up in an era of world war, the collapse of Empires and social order, economic collapse, revolutions and the rise of the greatest evils that the world has ever seen. Bonhoeffer recognized evil in the world and the dangers of radicalism. He was a child when the First World War ended and the Kaiser abdicated and Germany went through a violent civil war, the humiliation of the Treaty of Versailles, economic calamity, Communist and Fascist coup attempts which finally led to the Nazi takeover by legal means. When the Nazis came to power Bonhoeffer was a young pastor.  He was one of the first to recognize the evil of the Nazi state and Nazism as well as its hold over Christians from all denominations who rushed to embrace Nazism.

We live in somewhat similar times. The times are unsettled and great evil exists, evil which seeks to destroy the world in order to make it in its own image. Some of these are materialist and secular while others are rooted in the Great Religions. Still others are found in the mysticism and individualistic spirituality people who see the world and for that matter humanity as the enemy.

However for me the most troubling are those who claim the mantle of Christian Dominionism, Reconstructionism or the Seven Mountains theology. I say this not because the others do not pose a danger but because this popular perversion of the Christian faith is little different from the Moslem extremists of the Taliban in its goal of establishing a theocracy. Something which if I recall was opposed by the founders of the United States and enshrined in our Constitution.

We are well acquainted with the extremism associated with Islamic terrorism. Likewise we know all too well the more politically based ideologies which have committed murder on a massive scale.  However Christians are not immune to radicalism. They see radicalism as a godly response to the evils of their time.

Bonhoeffer saw the danger of Christians who become radicalized in relationship to how such radicalization stands in antithesis to the Gospel which is about restoring fallen humanity to relationship God. The Apostle Paul put it well, that Christ has“given us the ministry of reconciliation; that is, in Christ God was reconciling the world to himself, not counting their trespasses against them, and entrusting the message of reconciliation to us. So we are ambassadors for Christ, since God is making his appeal through us; we entreat you on behalf of Christ, be reconciled to God. For our sake he made him to be sin who knew no sin, so that in him we might become the righteousness of God.”  2nd Corinthians 5:18b-21

Bonhoeffer penned wrote about Christian radicalism from inside a Nazi prison while awaiting his execution.

“Radicalism always springs from a conscious or unconscious hatred of what is established. Christian radicalism, no matter whether it consists in withdrawing from the world or in improving the world, arises from the hatred of creation. The radical cannot forgive God his creation. He has fallen out with the created world, the Ivan Karamazov, who at the same time makes the figure of the radical Jesus in the image of the Grand Inquisitor. When evil becomes powerful in the world, it infects the Christian, too, with the poison of radicalism. It is Christ’s gift to the Christian that he should be reconciled with the world as it is, but now this reconciliation is accounted to be a betrayal and denial of Christ. It is replaced by bitterness, suspicion and contempt for men and the world. In place of the love that believes all and hopes all, in the place of the love which loves the world in its very wickedness with the love of God (John 3:16), there is now the pharisaical denial of love to evil, and the restriction of love to the closed circle of the devout. Instead of the open Church of Jesus Christ which serves the world till the end, there is now some allegedly primitive Christian ideal of a Church, which in its turn confuses the ideal of the living Jesus Christ with the realization of a Christian ideal. Thus a world which is evil succeeds in making the Christians become evil too. It is the same germ that disintegrates the world and that makes the Christians become radical. In both cases it is hatred towards the world, no matter whether the haters are the ungodly or the godly. On both sides it is a refusal of faith in the creation. But devils are not cast out through Beelzebub.” (Letters and Papers from Prison p.386)

This Christian radicalism has become a very real part of the American religious-political landscape and it has managed to poison a generation through the theology of Dominionism and Reconstructionism. The man who can be called the founder of this movement was R.J. Rushdoony. Dominionism has become one of the loudest and most powerful voices in American Evangelicalism, the Charismatic and Pentecostal movement and other Christian groups spanning the denominational spectrum. This version of the Christian faith is an Old Testament militancy based upon Israel’s conquest of the Land of Promise.

Some examples of Rushdoony’s theological argument which is echoed by many American Christian conservatives are found here:

“Israel was attacked by Amalek. According to Deuteronomy 25:17, Amalek “feared not God.” Amalek’s attack on Israel, according to the “Midrashic lore,” was an obscene defiance of God and a contempt for God. Where men attack God’s people, there we often have a covert or overt attack on God. Unable to strike directly at God, they strike at God’s people. There is thus continual warfare between Amalek and Israel, between God’s people and God’s enemies. The outcome must be the blotting out of God’s enemies…. the covenant people must wage war against the enemies of God, because this war is unto death. The deliberate, refined, and obscene violence of the anti-God forces permits no quarter… this warfare must continue until the Amalekites of the world are blotted out, until God’s law-order prevails and His justice reigns.” R.J. Rushdoony, The Institutes of Biblical Law (Nutley, NJ: Craig Press, 1973), p. 318.

Rushdoony’s son in law Gary North is now the primary ideological and theological spokesman for the Dominionist movement. He is very popular and influential in many conservative and political circles and with the Tea Party movement. North makes the following comment in relation to the Christian’s relationship and attitude when dealing with the world:

“It occurs to me: Was Moses arrogant and unbiblical when he instructed the Israelites to kill every Canaanite in the land (Deut. 7:2; 20:16-17)? Was he an “elitist” or (horror of horrors) a racist? No; he was a God-fearing man who sought to obey God, who commanded them to kill them all. It sounds like a “superior attitude” to me. Of course, Christians have been given no comparable military command in New Testament times, but I am trying to deal with the attitude of superiority–a superiority based on our possession of the law of God. That attitude is something Christians must have when dealing with all pagans. God has given us the tools of dominion.” Gary North, The Sinai Strategy: Economics and the Ten Commandments (Tyler, TX: Institute for Christian Economics, 1986), p. 214n

This militancy has gained popular support since the 2008, 2010 and 2012 elections. It is reflective of the bitter and angry undercurrent which pervades many Christian political activists. Many of these people are very comfortable with using violence against those that they believe are their enemies.

However such words and actions often mirror those of their proclaimed enemies, radicals who have used similar words of violence and justification of brute force to achieve their goals. Those who do not agree with the theology or ideology of the Dominionist movement are the enemy. Dominionists are quite clear. Thy will stop until they conquer and destroy their opposition. The war between the “godless and the godly” to quote Bonhoeffer is actual a war against the creation and humanity that God through Christ seeks to redeem.

Bonhoeffer made a very poignant observation:

“There is a truth which is of Satan. Its essence is that under the semblance of truth it denies everything that is real. It lives upon the hatred of the real and the world which is created and loved by God. It pretends to be executing the judgment of God upon the fall of the real. God’s truth judges created things out of love. And Satan’s truth judges them out of envy and hatred. God’s truth has become flesh in the world and is alive in the real, but Satan’s truth is the death of all reality.” Bonhoeffer Ethics p. 366

As I look around and see the great conflict in our country with Christians determined to win at any cost and demonize any contrary opinion. I fear for what will overtake us as the “Satanic truth” proclaimed from all sides of the political and religious spectrum consumes the land. 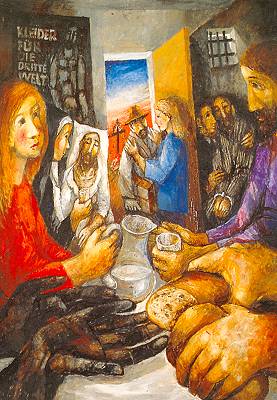 The antidote to this is simple but profoundly difficult. People of faith, especially those that claim to be Christians must demonstrate the love of God to all people no matter how vile their outbursts or prejudice. As Paul wrote to the Corinthians “God has entrusted the ministry of reconciliation to us.” It is this reconciliation of the real Incarnate Jesus Christ that must be made present in the midst of the current darkness. The Christian radicalism of the Dominionist movement is as poisonous as godless radicalism and it has no answers. It is time to cast it aside.

4 responses to “God’s Unfathomable Love: The Antidote to the False God of Christian Dominionism”