A Centurion’s Remarkable Sunday in Jerusalem: The Story of Longinus 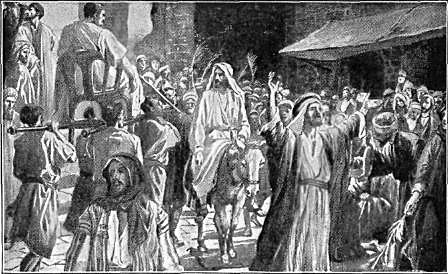 This article is the first story in a prequel trilogy to a trilogy that I wrote about Longinus the Centurion who according to tradition commanded the detail in charge of the crucifixion of Jesus. I plan on re-publishing each segment this week as part of Holy Week and I hope that you find them interesting. Story is basically historical fiction and my imagination about what it must have been like to be a Roman officer witnessing the drama of the Passion during what we now call Holy Week.

I find a special affinity to this soldier who while serving his country in a land far from home whose people detested the occupiers of their country by a foreign power that most considered infidels. I don’t think that anyone can really understand the plight of the Roman officers assigned to the occupation of Judea and Samaria in the First Century until they have  done their time in Iraq or Afghanistan. These peoples, though not Jewish have similar divisions,  contradictions and prejudices against foreigners as those that lived in First Century Palestine. Those American, NATO or coalition troops that served in Iraq or Afghanistan, especially those who actually worked alongside or came to know the people in those countries understand the plight of the Roman soldiers assigned to occupation duty throughout the Empire, but especially in the volatile provinces of Judea and Samaria like Longinus.

So enough of the introduction, on to the story…

Longinus and his men were tired. Pilate, the Governor had decided that he would travel from his Provincial capital of Caesarea in order to maintain a close watch on the Jews of Jerusalem during the annual celebration of Passover. During such times that city, the largest in the province would see its population expand exponentially as Jews from the diaspora, that is those living around the known world would make pilgrimage to the holy city.

Longinus’s men had helped provide the escort as Pilate travelled the nearly 80 miles moving up from the coastal plain where Caesarea was up to the hill country of Judea. The trip took three days as Pilate wanted to be in the city in plenty of time. The weather was conducive to the march, but though well trained Longinus’ men were not Romans but primarily recruited locally from drafts of Syrian’s and Samaritans.

Longinus never really enjoyed this assignment. He had served in other areas as a young officer and much preferred serving with and commanding Italians, Greeks, Macedonians and others to the men that he now commanded, but his duty was to serve wherever he was sent. He thought at times of his family in Italy near his home in Lanciano in the Abruzzo region near the Adriatic, missing his wife and children.

The duty of Longinus and other Romans in the region chiefly consisted of helping police the region and protecting the much despised tax collectors. One of those tax collectors, a Jewish man named Matthew had left the employ of Caesar a few years back and was now a “disciple” of some itinerant Jewish preacher named Jesus. He had heard a story from another Centurion about this preacher that made him chuckle. Evidently some Jews of the sect know as the Pharisees, a particularly strict group tried to trap the Jesus with the question of whether it was lawful to pay taxes to the Romans. They thought that they had trapped him because if he answered in the affirmative he would be rejected by them and discredited among the people, while if he answered that it was not they would have him on record as urging the people to disobey Caesar.

The Centurion who told the story said how with him standing in the background watching and listening that Jesus asked one of the Pharisees to bring him a coin. Looking at the coin he asked the man whose image was on it. The Pharisee, a bit hesitantly replied that it was “Caesar” to which Jesus, who supposedly was an unlearned but charismatic bumpkin from Galilee replied “give to Caesar what is Caesar and to God that which was God’s.” Longinus’ colleague, an outsider looking in at this curious religious dispute was amazed with the acumen of Jesus in dealing with a question that someone less intuitive could have botched with potentially fatal consequences.

The march through Samaria was particularly uneventful but as the Legionaries entered Judea, a region seething with hostility toward the Romans he and his men became more guarded, very aware of the hostility that sometimes invited violence.

They arrived about noon on Friday in order not to stir up the Jewish faithful on their sabbath and took up residence in the Fortress Antonia, the symbol of Roman might in this always rebellious city. That evening and the next day were uneventful, but on Sunday, Longinus was told to have his troops stand by in case of violence. The man named Jesus was entering the city and pandemonium was expected. According to rumor this Jesus had raised a many from the dead in Bethany the day before and was being greeted as a potential King and liberator.

The Roman presence was muted, Pilate and senior commanders not wanting to do anything that might provoke an insurrection. The troops remained on alert at the fortress while Longinus and a number of other officers went to observe events at a distance.

Longinus was amazed at what he saw. Thousands of people singing and throwing cloaks and palms along the street as Jesus, mounted on a white donkey accompanied by his disciples as well as numerous people from Bethany where he had been staying paraded down the street.

The procession moved toward the Temple where an understandably nervous delegation of Pharisees and the Priests of the Temple wondered what Jesus might do. If he was the “Messiah” that they preached about it could be a direct threat to their positions of power and provoke a Roman crackdown against them.

Jesus dismounted from the donkey and entered the Temple area, now crowed with thousands of pilgrims coming to offer sacrifice where he began to condemn the moneychangers. The moneychangers were in charge of selling animals for sacrifice to pilgrims, many of whom who could not bring their own animals for sacrifice. They were not according to what Longinus knew from his previous visits to the city at Passover and other Holy days men of good repute. They were believed to make their profit off the poor and widows and even the Romans that knew of the practice considered it less than honorable, and certainly the religious authorities were making money from their efforts.

As Jesus went into the Temple, Longinus and his fellow officers stayed back. As Gentiles their presence would create a crisis so they remained outside entrusting a Jew who worked with them to make the observation. They could hear commotion in the Temple and as they watched money changers and others came spilling out of the Temple grounds, many surrounded by their animals, lambs, doves and oxen. Longinus wondered what in the name of Jupiter was going on and soon his spy came running out of the Temple to make his report.

Slowing down as he approached Longinus he breathlessly gave his report. Jesus had taken a whip and driven out the moneychangers, condemning their activities and those of the religious leaders. Longinus had never heard of Jesus ever doing anything remotely violent before and this shocked him. He asked what else had happened and the spy reported that the Temple police and authorities did nothing and that Jesus left without further incident.

Longinus knew that the coming days could prove interesting. Going to Pilate that evening he gave his report. Pilate was quite concerned about the situation and considered it volatile. He ordered Longinus and the other officers to maintain an elevated state of readiness in case there was some sort of protest or even civil strife between the followers of Jesus and the Jewish authorities.

Longinus left Pilate and he and his fellow officers discussed the situation, briefed their subordinates and as night fell met in the tavern in the fortress where they quietly drank and wondered what the coming days might bring.