A Meeting of Centurions in Jerusalem

This is another part in the historical fiction series that I am wrote about the Centurion Longinus, who according to tradition was the Centurion at the Cross who put his lance in the side of Jesus and who would exclaim “Surely this was the Son of God” as Jesus breathed his last. This chapter takes up where after the Triumphant Entry of Jesus into Jerusalem and is about a meeting between Longinus and another Centurion who I call Flavius. This second character is based on the Centurion that Jesus meets in Capernaum recorded in Matthew Chapter eight. I began the first trilogy in 2012 and the second trilogy which is the prequel to the first last year as part of my Holy Week meditations. Hopefully I will to a concluding trilogy at some point imagining what things were like for these men in the years after that momentous week.

The day after the entry of this Jesus character into Jerusalem was uneventful for Longinus and his fellow Roman officers. Jesus had returned to Bethany after driving out the money changers and other assorted riff-raff out of the Temple but had returned without the tumult of the preceding day, Instead, Jesus with a number of his disciples went to the Temple where he engaged the people and some of the Pharisees in a time of teaching culminating in a series of what Longinus’ Jewish spy said were comments that could be interpreted as threats against the Temple establishment and veiled allusions to Jesus being the Messiah of the Jews.

Jesus left the Temple at the end of the day without incident but Longinus’ spy indicated that the Priests and other religious authorities were discussing ways by which they might rid themselves of this Galilean would be Messiah. Now Longinus and his fellow officers couldn’t care a whit about Jewish religious disputes so long as it did not make their job keeping the peace any more difficult than it already was.

When his spy reported back Longinus briefed Pilate of the simmering tensions. Pilate was with his wife Bernice when he received the report. Pilate did not like what was going on but had no contact with any of the religious leaders from any faction since his arrival and was troubled. His wife warned him in the presence of Longinus “not to have anything to do with that man” and he told Longinus to continue monitoring the situation, He also dispatched a messenger to the commander of the Legion in Caesarea to send reinforcements to Jerusalem just in case things got out of hand. Until then, Longinus, the Primus Pilus, or senior Centurion of the Legion was to help him maintain a close watch on the situation and hopefully keep the situation from boiling over.

After his meeting with Pilate and Bernice, Longinus sat around the tavern in Fortress Antonia with several others of his officers and Centurions from the Legion currently in Jerusalem. His Optio, or second in command Decius, a Roman from his former unit who had accompanied him to Palestine was there, as were two Decurio officers from the cavalry detachment and his Tesserarius, Quentin, a man who held a position much like a First Sergeant. Late in the evening another Centurion came to the tavern. This Centurion, was accompanied by his young servant was in charge of the Century based in Capernaum in Galilee.

The Centurion, Flavius by name ordered an ale from the barkeeper and walked over to the table where Longinus and the other officers sat. After the exchange of formalities Flavius sat with them. His young servant remained at the bar sitting alone.

Longinus had known Flavius for several years and known him to be an honorable man, though he did not necessarily approve of the very “Greek” arrangement that he had with his Pais,* which was common in the Roman and Greek military units, he respected Flavius’s soldiering abilities, leadership and integrity. Flavius and his Century had arrived in Jerusalem the previous night after Jesus had made his entry into the city. Longinus was glad to see Flavius because he felt that an officer stationed in Galilee might be able to shed more light on this man of mystery who had Jerusalem up in arms and so troubled Pilate.

Flavius asked what Longinus knew about Jesus, and Longinus told him what he had seen the day before as well as the information that he had obtained from his own Jewish spy.

Flavius, nodded and then began to tell Longinus and the other officers of his encounter with Jesus a couple of years before in Capernaum of Galilee.

Flavius began: “Longinus my friend, I met this Jesus in Capernaum and he is no ordinary man.” He paused to take a drink and continued as Longinus nodded for him to continue.

“It was a difficult time my friend. My Pais was very ill, sick to the point of death, He lay in our quarters and I heard that the miracle working Rabbi named Jesus was in town. Now, you know my friends that I care not a thing about what these Jews believe but I was desperate and from what I had heard and seen I believed that the Gods had to be with this man.”

Longinus continued to listen and then asked “Why didn’t you go to our Temple and have our Gods intercede for your Pais?”

“My friend I had already done that but my Pais’ condition had worsened. So I found this Jesus fellow as he was entering the city and sent some Jews that I had befriended to him.” He paused. “Those Jews convinced Jesus that I was a friend of the Jews and had done many good things for their community, and this my friend is true.”

“So the Jews helped you contact this Jesus fellow?” asked Decius. Longinus looked at his subordinate disapprovingly and asked Flavius to continue.

“I tell you my friends, this man is like no one that I have ever met, the Gods are certainly with him, whether our Gods or the Jewish God I know not which but he is not a normal Rabbi.”

The officers looked around the table as Flavius continued.

“Gentlemen, when this Jesus came to me I felt something that I have never felt in my life. Jesus asked what he could do for me and I told him of the sickness of my Pais and he asked if he could come to my quarters. I replied that I didn’t need him to come, because I was not worthy for him to come under my roof but to only say the word and my Pais would be healed.” 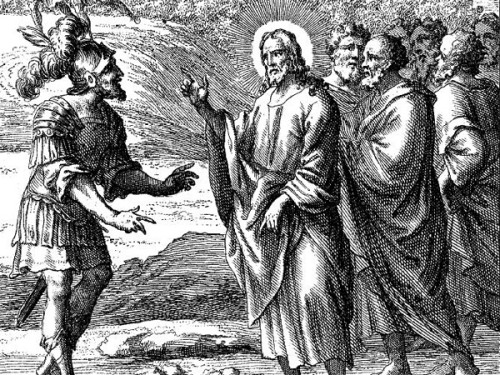 Longinus looked at his fellow Centurion in disbelief. Flavius sensing this continued. “My friend, I could not believe that I uttered those words but Jesus peered into my eyes and I knew that he knew all about me. Then he replied that “your servant is healed” and then exclaimed to all of the Jews around us that he “had not seen such faith in all of Israel.” Then, he put his hand on my shoulder, blessed me with some Hebrew blessing and walked away with his friends. When I returned to my quarters, my Pais, the young man over at the bar was well.”

Longinus saw the deep emotion that Flavius was expressing and raised his mug. “A toast to this Jesus!, whatever and whoever he he is.”

“Here here” replied those at table as Flavius looked on and several laughed. He had not expected such a reaction and said softly.

“My friends I don’t think you understand.” He paused a second and looked Longinus in the eyes. “I do hope that whatever happens in the next few days that no harm will come to this man. I would hate that my spear could bring harm to him.”

Longinus responded. “I hope that nothing happens to cause any of us any problems. The city is boiling with emotion and unlike your friend Jesus, most of them hate us and would rather see us dead, and some of their leaders from what I understand wouldn’t mind seeing him dead either.” Longinus paused and emptied his mug, drinking the ale to the last and then continued “My friend, I appreciate what you have to say, but we have to do our duty for the Empire regardless of our personal feelings. We are outnumbered here and this Jesus, as much as we may find him fascinating is the source of much of the current discord.” He looked at Flavius. “You do understand this?”

Flavius looked down at his drink and looked back up at Longinus and then at the officers around the table.

“I do understand my duty my friend, but you have to know what he did for me.”

“We do understand my friend” replied Longinus, “but our honor is loyalty to Caesar, not any other man.”

“I know Longinus, I do know, more than you think, but what if he is more than just a man?”

Longinus and the other officers sat silently pondering Flavius’s words. The silence was deafening and slowly the junior officers individually asked to be excused, begging pressing duties to attend to leaving Flavius and Longinus at the table. The bartender brought each man another ale and the two friends continued to drink in silence.

Note: The Greek word Pais is the word used in many Greek texts to to describe a homosexual relationship. The use by Matthew in his account of the healing of the servant of the Centurion used the word Pais to describe the servant, not the typical Doulos which is used for slave or bond servant as is most common throughout the New Testament. In fact this is the only use of the word Pais in the New Testament. Many Biblical scholars and linguists, though not completely certain do entertain that possibility that the Centurion that I call “Flavius” and his servant were a Gay couple. If so that would add an interesting twist of even more inclusiveness on the part of Jesus to the Gospel narratives.