Lebensraum & the Foundation of Genocide

This is the second part of an article that deals with war crimes, genocide and how seemingly normal human beings can become complicit in such crimes. To understands this we must look at some of the intellectual and ideological foundations.

The German war against the Soviet Union was the first truly race-based ideological war in history with the campaign against Poland its precursor. Adolf Hitler’s racial theories and beliefs played a dominant role in Germany’s conduct of the war in the East in both the military campaign and occupation. This has become clearer in recent years as historians have had the opportunity to examine Hitler’s writings, those of senior Nazi officials and military officers and documents which had been unavailable until the end of the Cold War. Understanding the Nazi ideological basis and the underlying cultural prejudice against the Jews and eastern Europeans in general is foundational to understanding Hitler’s conduct of the war and why the destruction of the Jews figured so highly in his calculations. One must also understand the military and police cultures and doctrines that enabled them to cooperate so closely in the conduct of the war.

The German war in the east would differ from any previous war. Its underlying basis was ideological. Economic and geopolitical considerations were given importance in relationship to the understanding of the German “Master Race.” Race and Lebensraum was the goal of the State that “concentrates all of its strength on marking out a way of life for our people through the allocation of Lebensraum for the next one hundred years…the goal corresponds equally to the highest national and ethnic requirements.” 1

Hitler believed that Germany was “entitled to more land…because it was the “mother of life” not just some “little nigger nation or another.”” 2 The Germans planned to “clear” the vast majority of the Slavic population and the “settlement of millions of hectares of eastern Lebensraum with German colonists” complimented by a short term exploitation of the land to “secure the food balance of the German Grossraum.” 3 Joachim Fest notes that Hitler called it a “crime” to wage war only for the acquisition of raw materials. Only the issue of living space permitted resort to arms. 4

Following the Peace of Westphalia wars in Europe typically emphasized conquest of territory and natural resources either to expand empires or promote some kind of self-sufficiency. The Thirty Years War, which was ended by the Treaty of Westphalia had a heavy religious component which added to its brutality. However the root of much of this conflict was about increasing the power of emerging nation states led by men not necessarily loyal to their religious brethren. 5

The American and Russian Civil wars had some ideological basis and helped usher in the brutality of total war. Both had major effect in these nations’ development and both were bitterly contested with the winners imposing to various degrees political changes on their vanquished brothers they were civil wars. 6

Adam Tooze sees the Holocaust as the first step of the “last great land grab in the long and bloody history of European colonialism…” 7 This does have merit, Hitler’s desire for Lebensraum or living space was a type of colonialism. However, Tooze’s argument does not take away from the basic premise that Germany’s war in the east was at its heart motivated by ideological factors. 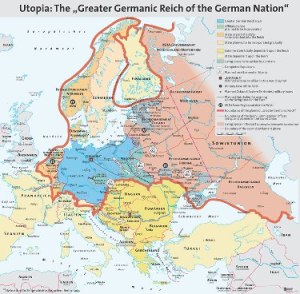 The root of this war was in the mind of Adolf Hitler himself. Hitler was born in Linz Austria during a time when various Pan-German and Ant-Semitic groups, publications and propaganda were widespread. As a young man Hitler moved to Vienna hoping to become an artist, something that he found little commercial success. While struggling to make a living in Vienna he was exposed to a culture far different from the provincial city of his youth, a city that had much culture but was also a meeting ground for the various peoples that populated the Austro- Hungarian Empire, including Slavs and many Jews. While many of the Germanic or Austrian Jews were outwardly little different from their Christian neighbors the Jews from Eastern Europe repulsed Hitler.

This attitude was not unique to German but found its roots in the various anthropologies written by other Europeans as well as Germans regarding the lack of rights of “inferior cultures” as related to their colonial expansion as well as the westward expansion of Americans. Friedrich Ratzel a German anthropologist and a founder of the Pan-German League paired the Jews with “the stunted hunting people of the African interior” into “the class of scattered people with no

land.” 8 Ratzel’s work where he also studied the conquest of the Native American tribes by whites helped form the basis of Hitler’s Understanding of Lebensraum, a concept that he borrowed from Ratzel. Ratzel was originally a zoologist. In his concept of Lebensraum Ratzel “linked the biological theory of life with the geographical theory of space.” Ratzel believed that to “conquer and hold sufficient Lebensraum, others have to be displaced.” Ratzel noted how European settles had taken over land from the Native Americans to take it for themselves. He noted that “the result was an annihilating struggle, the prize for which was the land, the space.” 9

Another German academic and lecturer at the University of Glasgow Alexander Tille, wrote in 1893 that it is “the right of the stronger race to annihilate the lower…when that race does not maintain its ability to resist then it has no right to exist, for anyone who cannot maintain himself must be content to go under.” Tille’s “laws” were easily applied to both primitive peoples as well as to “the economically less successful peoples of Europe.” 10

Hitler’s lack of success, struggle with poverty and resentment of others led him to the writings of the Pan-Germanic and Anti-Semitic movements. His years in Vienna were foundational as he as he absorbed the ideas of these Pan-German, anti-Semitic groups through newspapers like the Deutsches Volksblatt. 11 In Vienna Hitler began to connect the Jews with Marxism.12 Joachim Fest notes that in Vienna Hitler became obsessed by the fear of the Slavs and Jews, hated the House of Hapsburg, the Social Democratic Party, and “envisioned the end of Germanism.” 13

Hitler’s racial views were amplified after the war in turbulent Weimar Germany where he became a member of the NDSAP, rising rapidly within it, eventually taking over party leadership, reorganizing it so that it “became the instrument of Hitler’s policies.” 14 Following the unsuccessful Beer Hall Putsch of 1923 Hitler wrote Mein Kampf while imprisoned in the Landsberg prison in which he enunciated his views about the Jews, Slavs and Lebensraum. Hitler believed that Imperial Germany had been “hopelessly negligent” in regard to the Jews 15 and that the Jews in conjunction with the Catholic Center Party and Socialists worked together for “maximum damage to Germany.” 16

Likewise he saw the Jews as heading the “main ideological scourges of the nineteenth and twentieth century’s.” 17 It was the ideology of Hitler’s “obsessive anti-Semitism” 18 that drove Nazi Germany’s policy in regard to the Jews and against Jewish-Bolshevism. By the 1920s Hitler had “combined his hatred of the Jews and of the supposedly Jewish dominated Soviet state with existing calls to conquer additional Lebensraum, or living space, in the east.” 19 Hitler wrote: “The fight against Jewish world Bolshevism requires a clear attitude toward Soviet Russia. You cannot drive out the Devil with Beelzebub.” 20 Richard Evans notes that Mein Kampf clearly enunciated that “Hitler considered racial conflict…the essence of history, and the Jews to be the sworn enemy of the German race ….” And that the “Jews were now linked indissolubly in Hitler’s mind with “Bolshevism” and “Marxism.” 21

When Hitler became the dictator of Germany “his ideology and strategy became the ends and means of German foreign policy.” 22 His aims were clear, Hitler remarked to Czech Foreign Minister Chvalkovsky on 21 January 1939: “We are going to destroy the Jews.” 23It was clear that Hitler understood his own role in this effort noting to General Heinrici that “he was the first man since Charlemagne to hold unlimited power in his own hand. He did not hold this power in vain, he said, but would know how to use it in the struggle for Germany…” 24

5 Note the actions of Cardinal Richelieu in France who worked to expand French power at the expense of other Catholic nations and the Vatican itself.

results for the newly freed slaves which lasted another 100 years, while in the Soviet Union great numbers of “opponents of Socialism” were killed, imprisoned or driven out of the county

8 Lindqvist, Sven Exterminate All the Brutes: One Man’s Oddessy into the Heart of Darkness and the Origins of European Genocide Translated from the Swedish by Joan Tate, The New Press , New York and London 1992 p.145

9 Ibid. Lindqvist p.154 It is interesting to note that the current American “historian” of the American Religious right

David Barton made the same arguments recently about the American Indians. Barton said: “You have to deal, a lot of it, with how the enemy responds. It’s got to be based on what the enemy responds [to,] you cannot reason with certain types of terrorists; and see that’s why we could not get the Indians to the table to negotiate with us on treaties until after we had thoroughly whipped so many tribes …” “People complain about the fact that the American military and buffalo hunters went out and wiped out all the buffalo in the western plains. Doing that was what brought the Indians to their knees because the Indians lived on those wide western plains where there were very few towns; Indians didn’t go into town to buy supplies, they went to the buffalo herds, that’s where they got their meat, that’s where they got their coats, the hides provided coats, they provided covering for their teepees.

If you don’t have the buffalos, those Indians cannot live on the open western plains without those buffalo and so what happened was the military wiped out the supply line by wiping out the buffalo. That’s what brought those wars to an end, that’s what brought the Indians to their knees and ended all the western conflict.” Retrieved from Barton’s Wallbuilders Live broadcast http://www.wallbuilderslive.com/Historic.asp?cdate=77515 9 May 2014 and text   from   http://www.rightwingwatch.org/content/david-barton-explains-just-war-theory-we-had-destroy-indian-  tribes-until-they-became-civiliz

18 Ibid. Friedlander, The Years of Extermination p.xvii Friedlander called this anti-Semitism “Redemptive anti- Semitism” in which “Hitler perceived his mission as a kind of crusade to redeem the world by eliminating the Jews.

19 Megargee, Geoffrey P. War of Annihilation: Combat and Genocide on the Eastern Front 1941.Bowman and

23 Rhodes, Richard. Masters of Death: The SS Einsatzgruppen and the Invention of the Holocaust. Vintage Books a division of Random House, New York, NY 2002 p.37

2 responses to “Lebensraum & the Foundation of Genocide”