A few days ago the Iraqi military recaptured the city of Ramadi from the self-proclaimed Islamic State, or DAESH. When DAESH captured Ramadi last May it struck me very hard, I cried for the people of Ramadi as I knew that they were going to suffer terribly both from DAESH as well as in the campaign of the Iraqi military to retake the city.

Some Americans, even other military members do not understand this, but for me Ramadi is more than an Iraqi city, but a place that I have a great deal of feeling. I spent a significant amount of time in and around Ramadi, as well as the distant reaches of Al Anbar Province. I care deeply about the people of Iraq, and I grieve because the horror that they are now experiencing is mostly due to the actions of the Bush administration; first for launching a war that met no standard of the being a just war, a war that was condemned as unjust by Pope John Paul II, and a war that many of our closest allies refused to support. Then there was the totally bungled occupation policy which destroyed the country and brought about a massive insurgency and civil war. The results of that war have been devastating, for Iraq, Syria, the Middle East, and yes even for the United States. 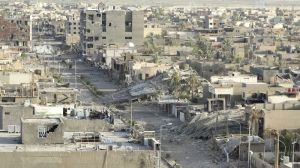 In fact the aftermath of that 2003 invasion opened a Pandora’s Box of chaos, and opened the door to what T.E. Lawrence warned about in 1919: “A Wahhabi-like Moslem edition of Bolshevism is possible, and would harm us almost as much in Mesopotamia as in Persia…” DAESH is exactly that, a fulfillment of Lawrence’s warning.

Whenever I read about Iraq I am reminded of how much of my life has been intertwined with that country and people. As I have said on more than one occasion I left my heart in Al Anbar. Back in 2007 and 2008 things were different there. Sunni’s and Shia were at least in the Iraqi military working with Sunni tribesman cooperated with American forces to destroy or drive out the forces of Al Qaida Iraq. I was meeting regularly with Iraqis who are some of the most hospitable people you would ever want to know. I remember meeting with the women who were going to become the first female Iraqi police officers in Ramadi.

Of all those people I wonder how many are still alive, how many have been driven out of their homes, lands, or have suffered the loss of family, friends, and their livelihoods. I grieve for what is happening to them and their once proud country. The towns, cities and bases that I served at have almost all been taken over by DAESH, or have been scenes of terrible fighting. Fallujah, Ta’quadum, Habbinyah, Ramadi, Hit, Haditha, Al Rutba, Rawah, Al Qaim, Al Waleed, Al Turbial, Baghdadi, and so many others devastated by invasion, insurgency, civil war, and the battle against DAESH.

When I left Iraq in 2008 I had hopes that the country might survive, as did many of the Iraqis that I met. I hoped one day to go back and travel to the places that I served, and maybe had the opportunity to see the gracious people that I love again. Maybe in 15 or 20 years there might, God willing be an opportunity. I hope and pray that those I know who were so good to me are safe. Until then I can only pray and hope that for them things will one day be better.

When I think of the Iraq war and its costs I am reminded of the words of Major General Smedley Butler in his book War is a Racket: “What is the cost of war?…this bill renders a horrible accounting. Newly placed gravestones. Mangled bodies. Shattered minds. Broken hearts and homes. Economic instability. Depression and all of its attendant miseries. Back -breaking taxation for generations and generations. For a great many years as a soldier I had a suspicion that war was a racket; not only until I retired to civilian life did I fully realize it….”

For the Iraqis, the Syrians, Americans, and so many others, the cost will be with us for at least a generation. But I do always hope and pray that things will be better.